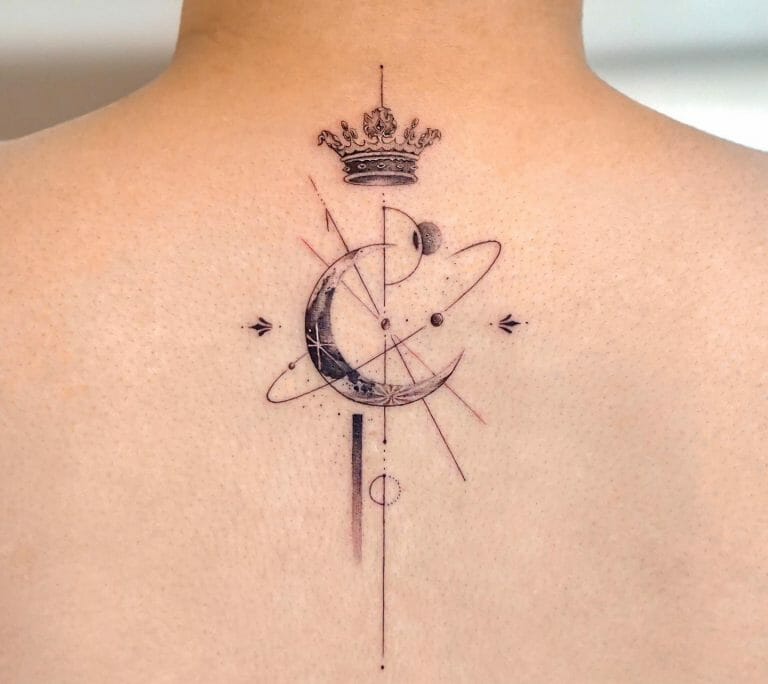 Are you looking forward to getting inked with a king crown tattoo? Here are some glorious crown tattoo designs that will speak of royalty!

Monarchs are honoured with crowns to mark the beginning of their kingship. Crowns can also be transformed into stunning tattoo designs that hold deep symbolic meaning.

A crown tattoo can be designed in a myriad of ways and pairing it with other symbols further enriches its symbolic meaning. Thus, it is important to choose a design that best suits your aesthetics and understand the symbolic interpretation associated with your crown tattoo before getting inked. You can pair your king crown with a shining sword or a roaring lion tattoo. Royal crown tattoos are often detailed with garlands of flowers or precious jewels. You can also bring a spiritual significance to your crown tattoo by inking it with a cross. Take a look at the following king crown tattoos along with their meaningful symbolism.

The king crown tattoo looks stunning with the large angel wings and a diamond inked on the chest of the wearer. The crown is shaded in a yellow hue with red and blue stones. The wings have a purple tint with yellow streaks near the corners. Moreover, the pair of red flowers placed adjacent to the sparkling diamond adds to the elegance of the tattoo design. Perhaps, the angel wings are associated with faith and belief in god. Combined with the crown tattoo, the design symbolizes one who holds immense power. In ancient times, crown with wings represented powerful monarchs.

The king’s crown is portrayed in fine lines along with an arrow and a crescent moon. The upside down crown has a deep significance associated with it. Perhaps, it symbolizes the overthrow of power signifying imminent change. The crescent moon, beautifully detailed with a shining star in black ink, enhances the subtle beauty of the design. You can ink this upside down with a crown tattoo on your arm like the one shown in the picture.

This unique design embellished the tribal crown with small red rubies and leaves. The crown is made out of wood and is portrayed in a shade of brown. The subtle watercolour inking style enhances the tribal appearance of the design. Perhaps, the tribal head of the jungle will be honoured with this majestic tribal crown.

A crown with a sword paints a picture of the bygone era of kingship and warfare. A snake, coiled along the length of the sword, brings an air of mystery to the design. Perhaps, it serves as a protector of the throne. The crown is shaded in black ink with intricate detailing. You can place this tattoo on your leg or arm.

This dainty crown and sword tattoo design are embellished with pink pearls. The sword and crown are shaded in black with antique designs carved on them with beautiful details. Sword is a weapon used by warriors and hence associated with strength. The crown signifies the power that stems from the strength of the sword.

The beautiful golden crown is placed with a pair of beautiful roses on the arm of the wearer. The ornamental detailing of the crown with colourful gems enhances the beauty of the crown. The crown, shaded in a golden hue, is outlined in brown ink. You can ink this floral crown on your arm and flaunt it in style.

This can be a great alternative to the crown tattoo in monochrome. The entire design is inked in black with intricate detailing of the floral motifs. The crown is detailed with stunning patterns that accentuate its charm. The leaves are shaded in a darker hue to add a subtle contrast.

The majestic lion is inked with an elegant crown on the neck of the wearer. The colourful detailing of the crown adds to the charm of the design. The blue eyes of the lion further enhance its royal appearance. In cultural depictions, a lion is represented as the king of the jungle. Thus, the crown fits with its status of royalty.

A crowned tiger is placed on the skin of the wearer with vibrant red flowers. The tattoo artist has played with contrast by pairing the monochromatic tiger with the stunning red roses. The shining appearance of the crown is detailed in black ink. The tiger is portrayed with a touch of realism. The glint in its eyes signifies its inner ferocity. The crown further glorifies its majesty.

You can personalize your crown tattoo by pairing it up with your zodiac symbol. The elegant crown is inked with the scales of justice, the symbol of the libra zodiac. The beautiful red crown is embellished with jewels. The scale of justice is beautifully detailed in a golden hue. Perhaps, it signifies that the possessor of the crown would restore justice to all the affairs.

The realistic tattoo of king David is paired with the glorious golden crown. The crown is inked in a stunning golden shade with intricate detailing. The king David tattoo is shaded in black with a touch of realism. According to the Bible, King David had established the eternal throne of God. Ink this spiritual crown tattoo on your upper arm or back where there is enough room to ink the details.

Pairing your crown tattoo with a heart can be a pretty tattoo idea for your next ink. The golden crown is beautifully detailed in white. The heart, shaded in a pink hue, makes the design even more enticing. You can place this concise design anywhere on your body according to your preference. You can also pair this crown tattoo with tiny stars or small birds to further enhance its beauty.

A king and queen crown tattoo can be a great couple tattoo idea to celebrate your relationship with your loved one. The glorious crowns have a shining golden hue with stunning detailing. The roman numerals, inked near the base of the crowns in black, add an antique touch to the design.

You can also portray your king and queen crowns in a watercolour inking style like the one shown in the picture. The king’s crown is shaded in yellow ink while the queen’s crown has a purple shade. The fluid bend of colours in the backdrop accentuates the stunning appearance of the tattoos.

The sword pierces through the realistic skull while the crown is placed on the top of the design. Blood is trickling down the crown. Perhaps, it is symbolic of the war that resulted in bloodshed. The entire design is shaded in a monochromatic hue with subtle white highlights.

Royal heirs to the throne are crowned on the coronation day before they embark on their royal journey. A small king crown tattoo is a simple design which can easily be a great first tattoo idea. You can get creative with your crown tattoo design by pairing it with other symbols. Here is a curated list of king crown tattoos in a multitude of inking styles that might help you pick the right design for your next tattoo!