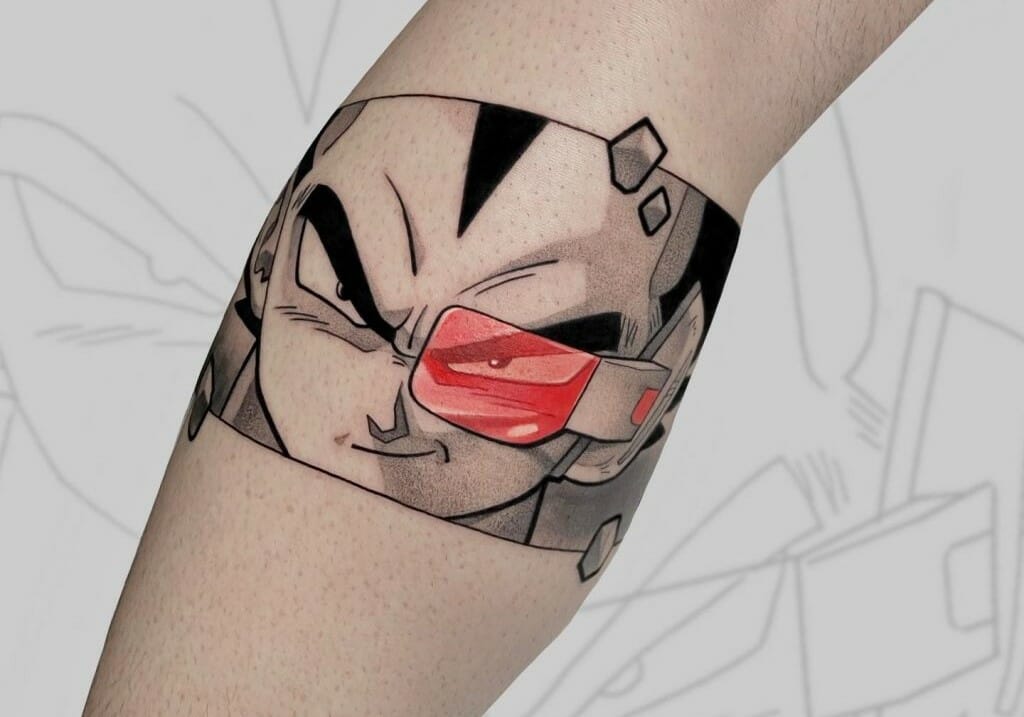 The Dragon Ball tv series was an integral part of our childhood.

The Dragon Ball franchise is very famous all across the world. Fans from all around the globe get tattoos of Dragon Ball Z.

Dragon Ball Z tattoos look super cool. They are a great way of showing appreciation for the show that has deeply impacted our childhood. Every character of the anime series has their own attributes, which makes them famous to many people. If you are in search of Dragon Ball Z tattoo ideas, we’ve got you covered. We have created a list of some cool Dragon Ball tattoo ideas for you to choose from in your upcoming tattoo session.

Son Goku was born Kakarot. Goku was first introduced as the protagonist at the beginning of the Dragon Ball series. He was sent to earth after his home planet got destroyed. He was introduced as an eccentric, monkey-tailed boy who practiced martial arts and possessed superhuman strength, i.e., mainly a Saiyan.

With a huge fanbase, Dragon Ball tattoo ideas are versatile, from small, simple tattoos to heavily detailed tattoos. They are all very sensational. And if you want to try out a super cute Dragon Ball tattoo, this colorful tattoo of Goku with a small senron is perfect for you. This is a detailed colored tattoo art with excellent color contrast and shadings, which makes the tattoo design look much more realistic. You can customize this tattoo to your liking and get it inked anywhere you want.

Among the anime series, the Dragon Ball Z series is known for its fight and powerful characters. The sensation of dragon balls was from the 80s when the manga series started. With that, the Dragon Ball tattoo ideas are adaptable according to your liking.

Like this fully colored Goku tattoo, the vibrant colors in this art are very beautiful and well combined with each color. The skills of the tattoo artist achieve the detailed work of this tattoo, so if you want to get this ink make sure to get this done by a professional tattoo artist to achieve this fine realistic look of Goku.

You might have seen many tattoo designs of dragon balls and Goku. The fascinating protagonist of Dragon Ball, Dragon Ball Z, Dragon Ball Super, and Dragon Ball GT is known worldwide, and all the credit for every breathtaking fight, powerful character, and character development goes to Akira Toriyama, the creator of the whole series.

So if you are searching for a supercool Goku tattoo design, then this tattoo design is perfect for you. The tattoo design is of a classic Goku form. The art is detailed with the precise black ink work, which makes this artwork more realistic and bold.

Are you a fan of Dragon Ball? If so, then this fantastic outline tattoo idea is for you. There are many promising and influential characters in the Dragon Ball Z series. Among those, there was this one specific character who is very well known among the fans of Dragon Ball Z: Son Gohan, the son of Goku, the protagonist of the series.

The tattoo artist well captures this mesmerizing tattoo design of the Gohan scene in his artwork. The emotion of the character is very skillfully sketched by the tattoo artist, who gives this tattoo a very realistic look and makes it more appealing. You can get this tattoo as a back tattoo, or you can add it to your tattoo sleeve.

Among all the characters of Dragon Ball, the villains of the series are as famous as the hero. And one of the popular villains of Dragon Ball Z is Vegeta. So if you are looking for some super cool Vegeta tattoos, then this tattoo is definitely for you. Majin Vegeta, the well-known villain of the Dragon Ball Z series, is very popular and is also known as the ultimate edge lord.

Vegeta fought Goku in order to defeat Goku definitively. Still, after being defeated by Goku and the Z fighters, he decided to stay on earth and trained himself with the motive of defeating Goku. Irrespective of your style, this edgy tattoo will look good on you. You can get this great tattoo on your back or sleeve tattoo.

There are many tattoo ideas for Dragon Ball Z tattoos. If you are a die heart fan of the Dragon Ball series and want to pay tribute, then this super cute Dragon Ball Z small tattoo of Goku is just for you. This animated tattoo has used some beautiful color combinations that look very realistic. The colored animated tattoo must be made using perfect color shading to achieve the flawless look of the tattoo.

This colored art of Goku is from his iconic childhood looks. You can customize this tattoo idea by adding various elements like dragon, ball, star, or other iconic elements to make it look more outstanding. Make sure you are getting the tattoo done by a professional artist to achieve the ideal look of the tattoo.

The original Dragon Ball series debuted in the 80s. The series was sensational from the very beginning, with the most powerful characters, fights, and villains. The villains in this series contain god-like power. And one of the famous villains from the anime series is Vegeta.

The Vegeta tattoos are very famous among fans because of their edgy look. The tattoo has the face of Vegeta made using black ink. The red glass in his eyes also gives a pop of color. This tattoo has used perfect shadows and lights, which look super cool. So if you are searching for a super cool, edgy Vegeta tattoo design, then this tattoo idea is just for you. This tattoo will look great as a sleeve tattoo or back tattoo.

Are you looking for some cute Anime series tattoo ideas? Do you like the chemistry between Arale and Goku in the anime series, the pure bond of comfort and joy? Then this creative and unique tattoo idea of Arale and Goku is just for you. Arale was a man-made world’s first perfect android who was a bit nearsighted and known for his energetic personality, incredible strength, and lack of common sense but was very fun to hang out with.

This matching tattoo of Arale and Goku uniquely captures the energy and bond between Goku and Arale shear. You can also customize this tattoo to your liking by adding different elements and colors. This matching tattoo will look great as a sleeve tattoo.

If you are a fan of Dragon Ball Z, you might want to pay tribute to it as a sign of love and devotion. If so, then this outlined tattoo is perfect for you if you are looking for something simple but impactful.

This tattoo of Son Gohan will be great for a first tattoo as it won’t contain effort. Son Gohan was the son of Goku and chichi. He was a half-breed Saiyan and one of the most prominent characters in the Dragonball series. He was the first Saiyan to achieve the super Saiyan mood. This super cool tattoo idea will be great for a tattoo sleeve.

The sensational anime and manga series’ journey started when Goku met Bulma and joined her on a journey to find seven dragon balls, also known as wish-granting seven dragon balls. And later on, the series became a sensation among many anime fans.

Small, simple small Dragon Ball Z tattoos are very versatile and beginners friendly as they look great on everyone irrespective of their style and skin tone. Just like this black-inked super excellent Goku tattoo design. This detailed tattoo design of Goku will look good on your arms or as a sleeve tattoo, or if you want, you can customize this tattoo and get it in any part of your body.

Dragon Ball fans will know how much the show has changed their lives. It is an integral part of their childhood. A Dragon Ball tattoo is the best way to show you love and appreciation for the tattoo. The anime series’s characters have some qualities that appeal to the people. Dragon Ball Z tattoos are so incredible that we couldn’t help but add a few more to the list for you to choose from.

What is a small dragon ball z tattoo?

Small dragon ball z tattoos usually refer to the anime characters from the show Dragon Ball Z. These small tattoos can be of any character from the show, but are typically of Goku, Vegeta, or Piccolo. Many people who get small dragon ball z tattoos are fans of the anime and want to show their love for the show by getting a small tattoo of one of the characters.

How much does a small dragon ball z tattoo cost?

How big is a small dragon ball z tattoo?

How long does it take to get a small dragon ball z tattoo?

The time it takes to get a small dragon ball z tattoo depends on the size and complexity of the tattoo. A small, simple tattoo can take as little as 30 minutes to complete, while a larger, more complex tattoo can take several hours.

How do I take care of my small dragon ball z tattoo?

After getting a small dragon ball z tattoo, it is important to follow the aftercare instructions given to you by your tattoo artist. These instructions may include keeping the tattoo clean and dry, applying an antibiotic ointment, and avoiding sun exposure.