10 Best Skull And Rose Tattoo Ideas You Have To See To Believe! 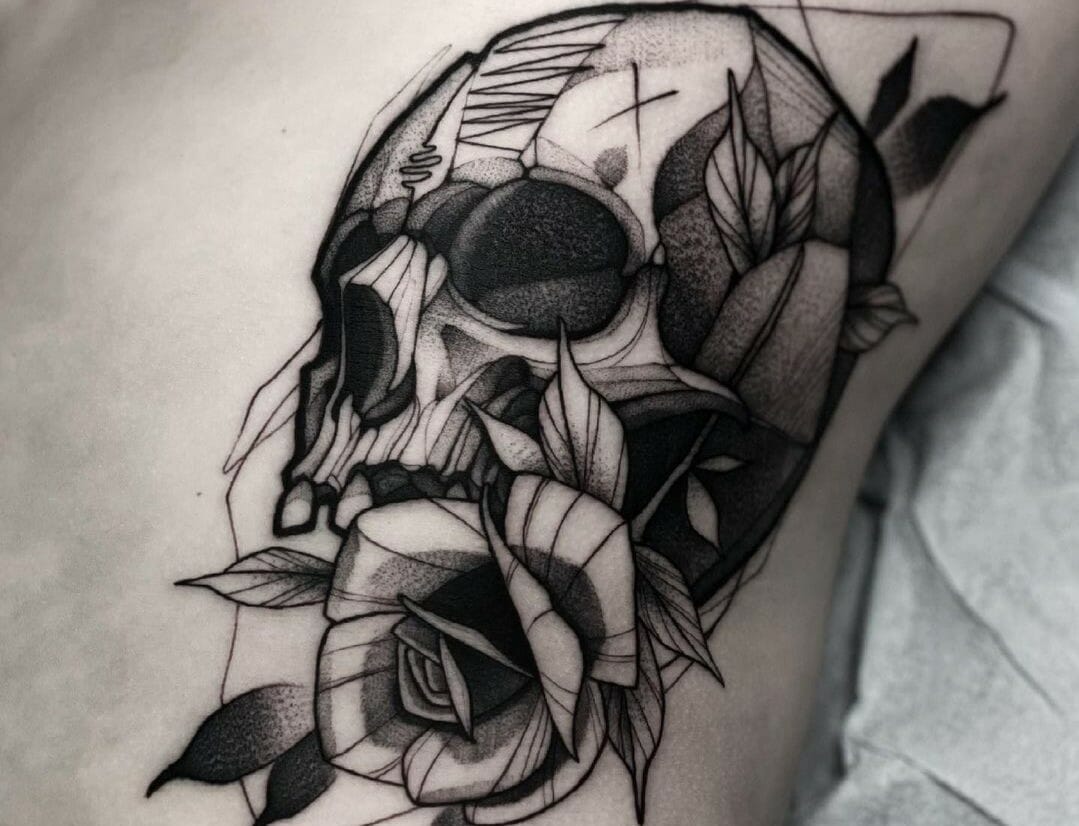 If you are fascinated by the symbolism of the skull rose tattoo, here are some awesome ideas for you to check with pictures and Instagram handles.

Tattoos are an excellent method to express yourself without saying anything.

Even though tattoos aren’t visible to the public, they’re nonetheless held by the person who has them and conveys something about that person’s character. A tattoo serves as a memento for the person who gets one and as an aesthetic expression of who they are.

It’s usually a good idea to think over your tattoo choice before getting one because it’ll be with you for the rest of your life. When viewed alone, the rose represents love, passion, respect, sacrifice and may even serve as a memorial. On the other side, the skull represents death, rage, sadness, power, strength, and decay. The skull’s deeper connotations open the door to unique meanings such as the death of a loved one, the conquest of addiction, and transformation, rebirth, and the transition from one level to another. With these connotations, it becomes clear how the skull and the rose may now be linked very simply. Because each of these elements can stand alone in a tattoo design, when the rose and the skull are joined in body art, the total message can be extremely strong. If you’re thinking of getting a skull and rose tattoo, this article post is for you.

Skulls And Roses Tattoo Design On A Maori Pattern

This arm-length tattoo features human skulls that have empty eye-sockets along with nose and jaws to show as if each and every skull is smiling. For the dramatic effect, two roses have been drawn near the top and bottom of the skull. The most interesting thing about this particular tattoo design is that the skulls and roses have been made on top of a Maori tattoo design. This makes the Maori pattern the background of the main tattoo.

Since the tattoo was made over the entire arm, the artist has used the place wisely, as we can see how detailed the skull and the roses are. The white skulls and the red roses have a detailed shadow falling on top of them, which makes it a very realistic tattoo design for skull and roses and a great option.

One of the most popular places to get inked is the forearm. This tattoo is a beautiful blend of delicate and crude. Skulls and Roses are often seen as a great combination of things that go well together when tattooing. The composition here works really well with each other. This image has brilliant technical use, and the two pieces flow really well with each other. But thinking about the message that this tattoo signifies – the fight against good in the times of evil between beautiful and ugly.

Life and death, beauty, vitality and unparalleled purpose, the eternal fight of good and dark. The minimalism really shows in this tattoo as it is made using only black ink, which makes it looks very simple and sophisticated. The shine of a black and grey tattoo is shown in this picture when the focus of colour is removed from the bodywork.

This is a beautiful illustration of skulls and roses. The way that it was created shows the dedication and the efforts that have been put into making it look so beautiful. The entire surface has been splendidly covered with the tattoo. The colours used in this are also very immaculate and pop up really gracefully. The blue in the rose is a symbolism of hope, and paired with yellow leaves and white detailing; it sets apart the design from the skull and roses designs that are usually seen.

The colour and contour variations create a design, which looks new and crisp and very impressive. This image contains fantastic symbolism, or higher colours and shade gradients, which focuses more on the beauty of the rose than the dread of the skull. To be a banger tattoo banger, it does not have to be big! Small skull and rose tattoos are just as complex and beautiful.

Skull Holding A Rose In The Jaw Tattoo Design

This is a fantastic skull tattoo design concept. This is a black tattoo with a lot of detail. Because of the broad black borders, every detail is brought to light. From the skull to the rose, to the leaves, and even to the shattered jaw of the skull, everything is a work of art. Although it seems to be stamped on the skin, it appears to be stamped within the skin.

Every part of the tattoo is black and beautifully shaded, which gives the impression that it is realistic. Intricately designed tattoo that wraps around the arm flawlessly gives a sense of fear is provided by the fractured head and missing jaw. This is a creative tattoo concept that may be used on any part of the body. One will easily find this skull and rose tattoo design to be both mysterious and terrifying.

Skull With A Flower Growing Through The Mouth Tattoo Design

This realistic tattoo of a smiling skull with tons of intricacies is full of vibrant colours and features a lot of vivid detail. This skull tattoo in a greenish-blue hue runs along the side of the leg and is rather large. The large, fractured skull is noticeable, but it is the blossoming flower that catches the viewer’s attention. Tattoos featuring petals and flowers give beauty to the design, though this tattoo is not meant for one who is weak-hearted.

This traditional skull tattoo design is so beautifully executed that it may be worn without the addition of floral elements. Those components, on the other hand, are what distinguish this tattoo as distinct and intriguing. The limb is nearly completely covered, and all that is left is a piece of art. These traditional skull tattoo design ideas are extremely intricate and with deeper meaning.

Skull Holding A Rose Between Its Teeth Tattoo Design

There’s no doubt that this is one of those skull tattoos that are better suited for someone who wants something unique and intriguing on their hands. The wrist is the starting point for these complex skull tattoos. It is possible that, despite the fact that it is a simple and not particularly detailed tattoo, it will draw notice from others. An elegant tribute to desire is provided by a rose placed between the skull’s jaws. Because of the excellent shading and contouring, the skull appears to be smiling and looking at you.

While the traditional skull tattoo design looks best on the back, just above the knuckles, and just below the wrist, it may also be done on the arm, shoulder, thigh, or chest with ease.

Although minimalist tattoos are currently very popular, stylish and simple skull tattoos never go out of style, regardless of the fashion. Many men prefer clean and simple lines that result in a simplified version of a skull rather than intricate detail, colour, and shading, among other elements of design. These tattoo design ideas of a skull with a rose are the perfect example of a minimalistic tattoo.

Without any extra artistic addition, the hollow skull and the rose that it is holding are given a 3D feel. Another noticeable thing in this particular design is that there are no corners or straight lines. This makes the design smooth. The small-sized elegant tattoo can be inked not just on your forearm but can also be done on your back, shoulder, bicep.

This tattoo is made up of human skulls and roses that cover the majority of the arm’s length. This starts from the shoulder and extends all the way to the wrist. This design, unlike the previous one, is rich in features and patterns. Both skulls are drawn to look like they’re made of wood. The patterns and carvings on the skulls are similar to those found on trees and wooden sculptures. The engravings on the skulls’ mouths and eye sockets are the most conspicuous. The skulls are adorned with full-blooming roses that appear to be a part of the skull. If colour is added to the tattoo design ideas, it will look much better! This skull represents beauty tattoo denotes that you live life on your terms even after being lost, loved, and evil.

If you do not wish to cover your entire arm with a tattoo, you can surely consider this option. This design shows off the creativity of the tattoo artist. The rose covers almost the entire shoulder and has a vintage vibe to it. The rose looks like it is wilting, and this can be seen in the folds of the petals. Even if the rose covers most of the tattoo design, it does not overshadow the grey-coloured skull.

The colouring and texturing of the realistic skull are done in a way similar to the craters on the moon. All of these things together make these unique skull and rose tattoo design ideas. A full sleeve is a great canvas for the Native American style tattoo, which can incorporate more detail and dedication from your own life.

The shin is also a good place to have a tattoo. This tattoo depicts the human skull with roses blooming on top as well as below the skull. The realistic skull has a few markings that are similar to sugar skulls. Sugar skulls are decorative skulls that are used for The day of the dead – A Mexican holiday. The roses complete the tattoo by adding a touch of life and beauty to the design. The artist has done a great job on the shadowing when making this particular tattoo, as that’s what makes it stand out.

If you are still wondering what does a rose and skull tattoo symbolize, then you can check some more skull tattoo designs here

10 Best Sketch Tattoo Ideas You Have To...

10 Best Sister Tattoo Ideas You Have To...

10 Best Simpsons Tattoo Ideas You Have To...

10 Best Silhouette Tattoo Ideas You Have To...

10 Best Side Tattoo Ideas You Have To...

10 Best Side Boob Tattoo Ideas You Have...

10 Best Sibling Tattoo Ideas You Have To...