10 Best Skull And Crown Tattoo Ideas That Will Blow Your Mind! 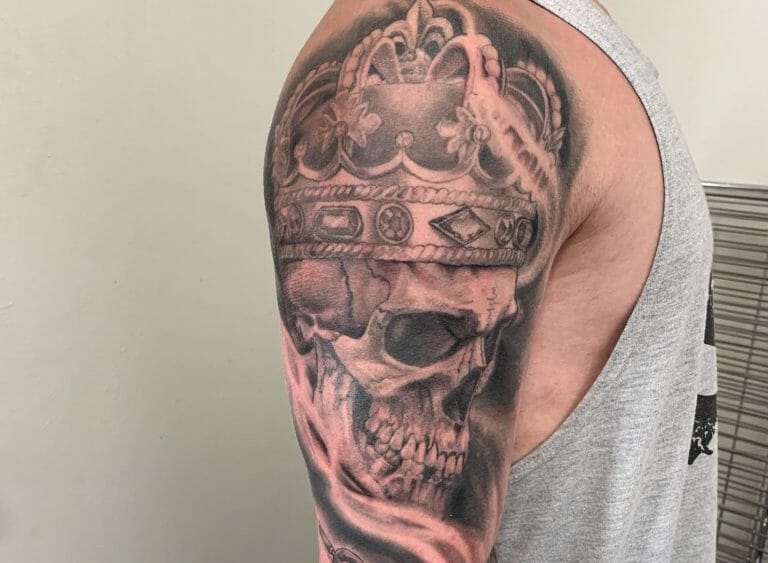 Are you planning to get a skull and crown tattoo? Keep reading this article to get a few super creative tattoo ideas that will blow your mind!

Skull and crown tattoos are becoming one of the many popular tattoos in tattoo art styles.

Crown tattoos generally symbolise the power and authority of the wearer, however, when combined with a skull tattoo, it takes on completely different meanings altogether. Skull and crown tattoos together represent the careful utilisation of power by the wearer and it also gives a gentle reminder that one should not become power-hungry to achieve their dreams and goals.

As we all know, crowns are worn by royalty, i.e kings, queens and nobles of the monarch families. That is why it oftentimes has a symbolic meaning of power and class, alongside beauty and dominance. This gives a new meaning to the tattoo that an individual is capable of reaching their goals in life and fulfilling their dreams.

On the other hand, a skull tattoo has meaningful symbolism of the concept of life and death in the tattooing world. By choosing to tattoo skulls and crowns together the wearer hopes to portray the dichotomy of the wish to follow your goals to become more powerful and the downside of this mad obsession if it goes unchecked. It basically showcases self-control through the tattoo body art designs.

skull tattoos have always been popular in the goth cultures, but now it is becoming more and more mainstream. This beautiful tattoo in the picture showcases a realistically drawn skull with a lot of attention-to-details put into it. This is the half sleeve tattoo, which you can also customise to your liking. There are some additional designs at the bottom of the tattoo, which really help in enhancing the beauty and perfection of the tattoo.

This tattoo is perfect for newbies who aren’t very sure about getting crowns and skulls tattoos on their bodies for the first time. This minimalist tattoo would be a great start for them to explore more in the future later.

It features a detailed drawing of a skull with a crown on its head. The design of the crown is very unique and beautiful. There is also a skeleton hand at the side of the tattoo which you can choose to ignore if you do not want it.

Small Skull Tattoo On The Hand

This is a small skull and crowns tattoo done with detailed shading and an overall awesome design. The dripping of the skull in the tattoo signifies that time is running out and it is now or never to seize the day and achieve your dreams.

Otherwise, it is a pretty simple and straightforward tattoo, with a minimalistic crown design and a carefully shaded skull. This skull has two special features in it, one is a single hair in its forehead area, which gives the skull a unique style and personality and the other feature is the crooked nose which may be suggesting that the wearer of the tattoo is a rebel and prone to get themselves into mischiefs.

As mentioned earlier, skull tattoos have the concept of time in their symbolism. In this particular tattoo, this concept is further stressed by the design of the watch. The tattoo showcases a skull with a clock on its forehead and a crown on its head. The tattoo also features a rose at the bottom of the tattoo.

The clock on the forehead of the skull symbolises the quick passing of time between life and death and urges the wearer to focus on achieving their goals, fulfilling their dreams and living their life happily, in general. The rose, however, means the quality of time spent and achieving happiness.

Skulls And Crown Tattoo With Flowers And Leaves

When on the one side, skulls represent the concept of good and bad, life and death and in black and white, the flowers describe beauty, hope and new beginnings. Together they symbolise the starting of a new life after defeating the past enemies and overcoming past obstacles. Flowers also signify love. The skulls and crown tattoos alongside tattoo designs of flowers feature the concept of good vs evil.

The tattoo in the picture has a 2d design style with careful shading done in places to give it a more natural 3d look. The design of the crown in the tattoo is very unique and elaborate. Rose stems with leaves attached to them are seen sprouting from the skull.

This skull tattoo design is very unique because it has the crown of the Queen of England on its head. It also has a beautiful design of a rose at the bottom of the skull.

Different cultures have different meanings put to skulls and crowns, nonetheless, on average it means strength, courageousness, and wisdom, alongside the usual meaning of time and death among many other things.

Skulls are increasingly popular among individuals who wish to appear brave and daring while making a statement. Skulls are both powerful and cheery, since they may assist us in extracting the positive from the negative. This is why skulls also convey the message that death is not something to be dreaded. It’s because death marks the start of a new life above the ground.

This full sleeve tattoo has a side view of a skull with the crown on its head and it also has a compass in the mix of the designs to signify the need to stay true to your values and ethics no matter what. You can go for this design if you’re thinking of doing your sleeves with some unique and interesting designs.

Did you know that gamblers prefer tattooing the combination of skull and crowns because they believe it indicates good luck and the coming of good times?

The tattoo in the image shows an amazing rendition of a skull with a crown tattoo with beautiful shading done to give it a more realistic and 3d look. It also showcases roses on the sides and bottoms of the tattoo which makes the tattoo nicer to look at.

Crown Chest Tattoo With A Laughing Skull In The Middle

This is a beautiful chest tattoo which will cover half of the upper chest area of the individual. The tattoo depicts a laughing skull with a crown on its head, which is also surrounded by leafy designs that are further enclosed in a thick border design. You can also tattoo your favourite quotes or names of loved ones or general words on the top of the tattoo.

Skull And Crowns Tattoo With A Stopwatch And Intricate Designs

The combination of skulls and crown tattoos is open to interpretation. It can have a variety of meanings. A crown connotes authority and strength, on the other hand, a human skull denotes power, death, and protection. This design can be seen as a symbol of several cultures. The skull with crown tattoos has a variety of connotations, including authority, immortality, leadership, power, good luck, self-control, legitimacy, control, and ownership, among several others.

Apart from the tattoos listed above, there are some more skull and crown tattoo designs ideas for you that you can check out –