10 Best Skull And Cross Tattoo Ideas That Will Blow Your Mind! 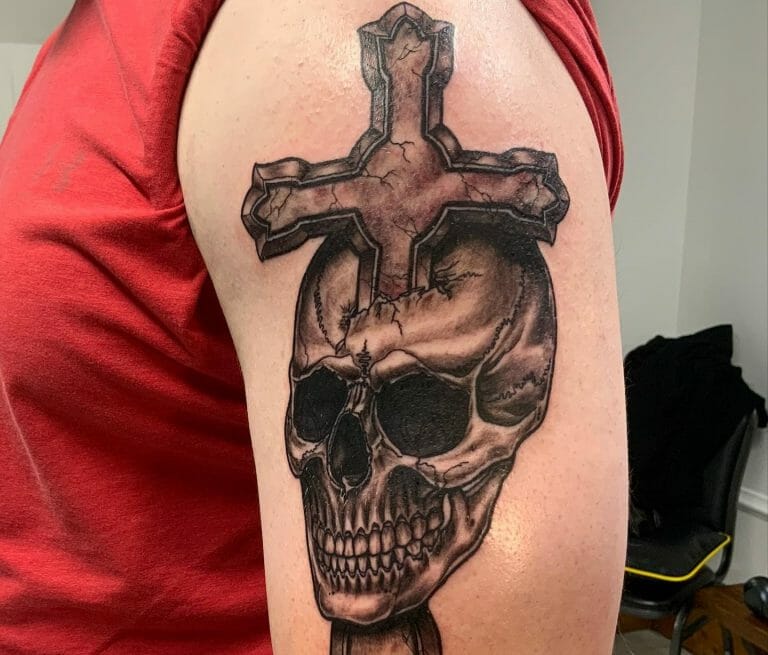 If you’re looking to get your first skull and cross tattoo, that will add a spooky charm to your style, then this list would be perfect for you.

Skull tattoos, despite having death associated with them, are some of the most popular tattoos people go for, ranging from sugar skull tattoo designs to colourful skull tattoos.

Skull and crossbones have been the symbol on pirate flags but they’re not associated with negativity; rather they are used as warnings to alert people of death or incoming danger. Before getting a tattoo for the first time, there are a lot of things one should think about-like getting coloured tattoos can be harmful and trigger allergies so it is always safe to go for a blackwork tattoo for the first time, and your tattoo artist can be of immense guidance in this.

A Skull Tattoo With An Impaled Cross

A Skull Tattoo Inside A Roman Cross

The inside of the human head is actually quite fascinating when the skull tattoo designs are drawn so artistically. The skull inside the Roman cross may pay tribute to the ones who lost their lives, but it also represents life and the power of God. The beautiful shading on the borders of the cross and the skull, the extremely elaborate details on the teeth, the deep black shading of the eye and the background, the gradient shading on the nose, and the two sideways skulls on each side make this a brilliant choice. You can also add your own touch and combine this with a crossbones tattoo.

A Colorful Cross And Skull Tattoo

Colourful skull tattoos are a great idea to go for, but pigmented tattoos aren’t recommended for first-timers. But if it is approved by your tattoo artist, then go for it! In this cool skull tattoo design, the splash of red on the skull, the flower and the dark green pigmented leaves, the ‘slow death’ banner, and the yellow eyes add a different charm to usual skull tattoo designs. You can also replace the flower and go for a skull and rose tattoo. The deep-lined black border, as well as the black gradient shading on the edges of the cross as well as the skeletal hands, nose, and teeth of the skull, add the necessary detail to make this one of the best colourful skull tattoos you can opt for.

A Black And White Skull Tattoo With A Cross

Any cool skull tattoo design is combined with a Roman cross most often. If you’re looking for chest tattoo designs or an arm skull tattoo, this realistic blackwork will be perfect. The graphic work on the scars and cracks on the skull here is done with black and grey gradients, combined with black gradient shading for the mouth, with deep outlines for the cross. The dark black of the body of the cross with the caricatures adds a beautiful contrast to the realistic depiction of the skull, with the blank skin used to highlight the features of the skull and makes for a great tattoo.

This simple skull tattoo design can be recommended to a first-timer if they want to go for other things than a small skull tattoo. This tattoo stands as an ode to lost lives and is a simple blackwork skull tattoo design that will look good anywhere on your body, like, on your left arm as well as your right arm. This skull tattoo design is done in simplistic line art with thick borders, with a skull at the bottom, a cross above it, and a ‘defeated’ banner below, with three Asterisk stars in the background. The gradient shading along the thick lines of the crack along the cross as well as the skull add life to this tattoo. You can also put your own rules and make your own skull tattoo designs by adding more skulls or even make this a skull and crossbones tattoo.

This cool skull tattoo style is a great colourful skull and crossbones tattoo design and one of the simplest yet best skull tattoo ideas you can go for. In this tattoo design, we have a green cross, with light yellow shading in the middle that fades into the centre to reveal the skin while the skull is done in a single line stroke adding one eye socket and the detailed teeth. The skull and crossbones mainly have yellow gradient shading with splashes of black as well as the black cracks on the top of the skull. The red in the background as well as on the edge of the cross adds a great contrast to the warm tones. You can also add multiple skulls and go for even spookier skull designs and other tattoo ideas.

A Skull Tattoo With Banner And Cross

A Beautiful Skull Half Sleeve Tattoo

This skull sleeve tattoo is quite charming and will surely add a different style to your look. With the entire skull tattoo design sort of mixed with strokes of smoke, the realism in this tattoo is still vivid. From the white highlights on the teeth, nose, and the architecture of the cross to the deep gradient shading of the sockets and the light gradient shading of the features of the skull and the body of the cross, and the realistic smoke makes this an alluring skull sleeve piece that will look good even as a half sleeve tattoo on your upper arm or lower.

A Skull Rose And Cross Tattoo

A skull and rose tattoo is usually depicted to honour and pay respect to a loved one and thus rose tattoos are often drawn together with skull tattoos. In this realistic tattoo, the roses tattoo design feels almost real and the red colour with white highlights adds a great contrast to the blackwork of the skull and cross. The gradient shading to bring out the features of the skull, and the elaborate work on the details of the cross attached to a rosary thread makes for a beautiful tattoo that represents love for a passed one. Thus a skull and rose tattoo will be perfect if you’re looking for a tattoo with a deep meaning.

A skull tattoo should neve necessarily mean a scary tattoo. Certain unique ideas associated with skull tattoos are a snake tattoo, and sometimes even a clock tattoo since time indicates the approach of death, along with the skull. A skeleton tattoo or a skull wearing something, like glasses or a hat also make for adorable ideas. These skull tattoo ideas will also look great: