10 Best Skull And Bones Tattoo Ideas That Will Blow Your Mind! 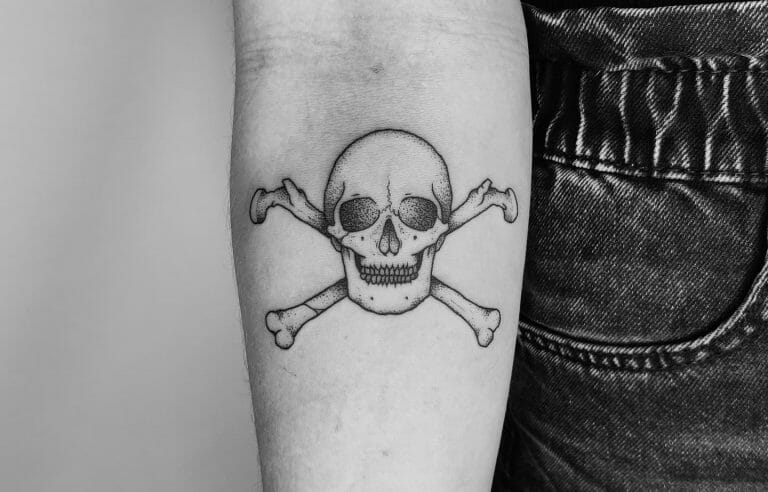 If you’re looking for a bunch of unique and beautiful skull and bones tattoo designs, then this list would be perfect for you!

Skull tattoos are some of the most common and unique designs people go for while looking for a meaningful tattoo.

Skull tattoos have a huge range of variety one can choose from, be it crossbones tattoos or skulls and rose tattoos, with each having a distinctive meaning attached to them. The rose tattoo along with the skull is representative of the honour and affection for your loved ones who have passed away.

With all these meaningful and creative tattoos and what to get as your first one, this list will help and your tattoo artist will be able to provide even more information. Skulls can also be animal skulls but more commonly people go for human skull tattoo designs. Minimalist and blackwork tattoos are also recommended for a first-timer as colour pigments can trigger allergies and a small tattoo will also help to get the hang of it.

A Graffiti Style Skull And Bones Back Tattoo

Skull tattoos have an array of styles to choose from and if you’re interested in something light and artistic this back tattoo would be a perfect choice. This cartoon-style skull is done entirely in blackwork, which your tattoo artist would prefer, with pointed edges for the teeth, a crack on top of the skull and broken crossbones. The gradient shading in the backdrop, bones and the edges of the skull, the small nose and big eyes add to the fun of the tattoo design making this a great option for the guys to go for.

If you’re looking for minimal skull and crossbones tattoos then this skull tattoo design is the one to opt for. The palm is usually a very unusual place to get a tattoo, unlike the forearm but it’s nothing you shouldn’t do. This skull tattoo design is done in simple blackwork line-art with no gradient shading or added objects. If you love pirates, then this simple design drawn in a comic style would be perfect for you as well as will be great as a first tattoo since it is minimal, doesn’t have pigments and is comparatively smaller in size; crossbones tattoos signify the famous Jolly Roger, the name given to the classic symbol of the pirate flag, and hence a pirate skull tattoo would signify a warning call against danger. You can even go for a one-lined minimal skull on the fingers if you want a small tattoo.

Skulls don’t always mean a bad omen, and your skull tattoo can be fun if you want to. This detailed cartoon skull displays a comic style skull, with a little angry undertone, with a broken hole at the top left of the skull, complete with clear crack lines, a small nose and big dark eye sockets, and pointed edges for the teeth set. There is gradient shading as well as striped lined shading on the curves and nooks of the skull as well as the crossbones, with even eyebrow lines to highlight the comic style of the skull tattoo. If you want similar kinds of tattoos in this style, you can even go for a sugar skull tattoo.

A Red And Black Skull And Crossbones Tattoo

This line-art blackwork skull tattoo design will be liked by any person, be it a girl or a guy. This simple design with a splash of red will look great anywhere on the body, probably a great chest tattoo. Generally, skull tattoos are fairly simple, like in this design, the skull has gradient black shading on top and gradient red shading on the bottom, with the crossbones being entirely red, all complete with a thick black outline. The broken teeth and the jet black eye sockets and jaw make the tattoo even brighter. One can also add multiple skulls or some object like a bird or flowers to make the classic design even more symbolic.

While drawing images of skulls, it seems that the artist prefers using red and black because the former is a sign of life and the latter of death. With a red backdrop, this blackwork skull tattoo is done in thick black outlines, with gradient shading on the curves of the skull and on the bones to accentuate their features. This tattoo design has three entwined bones at the bottom, with another bone at the bottom, adding a unique take on the classic crossbones. This tattoo will look great on the chest or on the hands.

A Realistic Skull And Crossbones Tattoo

This minimal yet realistic skull tattoo would be the best choice for a first tattoo. Portraying images of life and death, skulls are a great option to go for and in this design, the tattoo is done in blackwork with gradient shading around the edges and lines of the skull as well as the bones that highlight the realism of the tattoo. The fiery red backdrop of the fire creates a perfect contrast, with scattered dots on the skull and the yin yang as the eyes, making this a great choice for both men and women.

If you’re looking for the classic realistic skull tattoo, then search no more. This simple line-art blackwork skull tattoo is a clean work featuring a perfect set of teeth, clean nose and eye sockets, complete with dotted gradient shading on the sides around the skull, the sides of the bones and darker dotted gradient shading for the inside of the sockets, with clean crack lines on the bones. To touch up this classic tattoo, you can add multiple skulls or maybe go for a pair of wings behind the skull.

A Skull And Crossbones Tattoo With A Quote

This simple skull design is something both guys and girls can opt for. The foreign quote in the tattoo stands for “rather death, than defilement” and is significant to one’s pride. This skull tattoo design is done in bold black line art outlines with thinner lines used to depict the cracks on the head of the skull. The dotted gradient on the cross bones as well behind the skull goes geat with the gradient shading on the edges and eyes and nose sockets of the skull. You can add your own touch to replace the three Astreiks with flowers, crosses, wings of birds, or anything else from nature to make this skull tattoo design stand out even more.

A Realistic Skull And Crossbones With A Dagger And Snake Tattoo

If you’re looking for a dark tattoo, then this skull sleeve tattoo is the one you should opt for. A snake coiled around the skull represents the ultimate destruction and death of both body and soul and is a very intense but philosophical idea for a tattoo. This tattoo design shows a realistic caricature of a dagger piercing the skull, with realistic work on the broken part of the same, the dagger itself, and the scales of the snake. The entire tattoo design has gradient shading to make the design look more real, especially the shading on the bones, and the smoke from the two candles on each side. The red in the background makes the blackwork stand out even more.

A Skull And Crossbones Tattoo With A Crown

This realistic skull tattoo with a crown in a way is symbolic of the King of the Dead, like in the Greek myths. This blackwork tattoo is stunning, complete with all minute details like the crack in the middle and the clean set of teeth with gradient shading of the curves and edges of the skull as well as on the crown. The red pigment to mark the jewel on the crown adds a great touch to the monotone.

Judging from the variety of ideas, one will never fall short while going for a skull tattoo design. The skull and bones tattoo meaning is very distinctive which adds further charm to the tattoo. So no need to search for other sites or links for images that give you ideas on a skull design, just check out this list for more information.

Skulls can be a sign of the afterlife as well as poison – but the beauty of it lies in what you want it to mean. Getting a human skull and rose tattoo or skull and crossbones tattoos or even the tattoo of animal skulls, like the bull with horns, would be deeply significant. Women usually prefer a cute, quirky design so getting a sugar skull tattoo because, the most creative and artistic symbol attached to skulls is the sugar skull tattoo design, which represents the Day of the Dead festival in Mexico, celebrated to honour the dead. You can also go for these skull tattoo ideas: