10 Best Sketch Tattoo Sleeve Ideas That Will Blow Your Mind 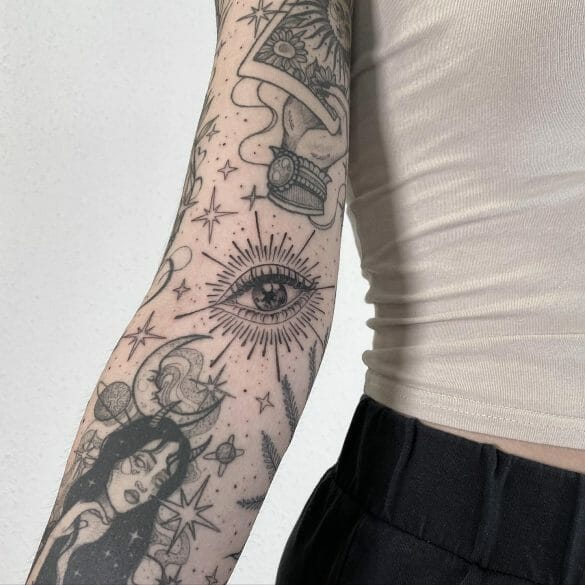 If you are looking for some sleeve tattoo designs then you have come to the right place. We have curated some amazing tattoo sleeve designs just for you.

Sketch tattoos generally appear to be simple black and white tattoos, however, each tattoo requires a lot of hard work and have a simple yet effective meaning hidden behind it.

In the recent years, sketch tattoos have gained a lot of popularity. However, not every tattoo artist can make small details in every sketch tattoo.

sketch. Tattoo designs are unique in their own way. They contain small details like musical symbols, lines, shapes and designs that involve a lot of detail. Most of these sketch tattoo designs are usually black and white. However, if the you want, then there can be colors added to them. Sketch tattoos give out a unique vibe. For the tattoo artist, your body seems like a canvas where they can sketch beautiful designs. Not only Audi’s tattoo designs different, but they also gave a sense of uniqueness and power. For many cultures, these sketch tattoo are a mode of self expression. These tattoos are versatile and trendy and have a wide range of designs that are inspired.

Anubis is featured in Egyptian mythology and is a symbol of the underworld or death. It is a representation of a persons role who is trying to fight bad energy and evil spirits. An anubis tattoo is generally a portrait of the God of death.

According to Egyptian mythology, Anubis was termed as the ‘Conductor Of Souls’ and used to care for the dead. Anubis was the one who invented embalming which he first tried on the dead body of Osiris.

This particular tattoo shows the face of the Anubis. It is made with thin and thick strokes of black ink. The details on this tattoo is very unique. This kind of an image is very versatile and can be featured on the entire arm. Y

Cherry blossoms are a very common tattoo design. Generally, these tattoos are made with colours like pink, white and green. However, this tattoo is made entirely with black ink. Cherry blossoms are small pink flowers that are found in Japan and are a symbol of femininity. It is also a reminder that the life is fleeting and we should live every moment in the present, because that is all we have. A cherry blossom tattoo generally represents beauty, love, and the passing of time.

This tattoo is made on the entire arm of the person, like a sleeve. This pattern is made with black ink, however colours can be added to this tattoo if required. The tattoo artist has made thin strokes of black ink which look very detailed and beautiful.

If you are a comic book fan, then this tattoo design is the perfect choice for you. This tattoo is of Joker, a supervillain character that is featured in DC Comics opposite Batman. A Joker tattoo is a general representation of the dark side of one’s life. It is also a representation of perseverance.

This beautiful piece is made with thick and thin strokes of black ink. It is made on the forearm of the person. This theme tattoo is inspiration from the Joker movie that features Joaquin Phoenix. Even though this is a black and white pattern, it looks like an effective piece. You can add colors to this tattoo if required.

A nature tattoo is a representation of quality of life, rebirth and cleansing. Every nature tattoo has a different meaning attached to it. For some, a flower can represent love, and for others the flower can represent beauty. The meaning of each tattoo differs from person to person. It could represent whatever is important for you. These nature theme tattoos are source of celebrations for creating us just like mother nature. These designs are an inspiration for each and every individual to learn and grow.

This tattoo is made on the entire arm of the person. It starts from the upper arm and goes down till the rest, covering the elbow as well. This tattoo features different types of flowers and animals that are staying together in harmony. It is made with different thin and thick strokes of black ink with no colour, so that it gives a sketchy look. However, if you want you can add colours to these tattoos.

Medusa is a goddess from Greek mythology. According to stories, some people portray her as a victim, while some people see her as a monster. Not everybody is comfortable in getting a Medusa tattoo. She is seen as a symbol of female power. In Greek mythology, it is said that she was cursed by Goddess Athena and she has snakes instead of hair. Everytime she would look at a person, they would turn into stone. She was released off this curse when she was beheaded by Perseus.

this It is made with thick and thin strokes of black color in some areas. The tattoo artist has done shading in black and grey color, which gives a sketch drawing effect. To create such a beautiful piece, tattoo artists may require more than one sitting.

Star Wars is not just a series of movies. It has now become a popular culture that has a huge fan following. The vast universe of Star Wars is filled with brilliant icons that can be represented as body art. Such tattoos are definitely more popular amongst guys.

This forearm sleeve tattoo is a sketch of Luke Skywalker and Darth Vader. This sketch style tattoo looked like an actual comic book sketch with pencil like lines. It is made with shades of black and grey colors and thin strokes. The work is very detailed. The process of this tattoo takes more than one sitting and can be a little painful. This could be a great tattoo choice if you are a star wars fan.

A lion tattoo is another most common tattoos that people like to get. It signifies courage and bravery of the weather of the tattoo. It shows that the individual is fearless and can take up any challenge coming their way. This tattoo is versatile and can be done by both men and women. In ancient times it was said that men get this tattoo to show masculinity and leadership, and women get this tattoo to show their devotion towards family. However, this is all changed in recent times.

This beautiful art piece has taken more than one sitting to complete. It is made with thick and thin strokes of black colour. It shows the face of the lion and its made and under the tattoo there are bunch of flowers that mean love and devotion. This piece of artwork is made on the upper arm of the person and comes till the elbow. One of the best arm tattoos that you can get!

A fan of duck tales? Then this tattoo design is just for you! This tattoo is of a character called Scrooge McDuck which was created by Carl Barks for Disney. He is the uncle of Donald Duck and has his own sense of style. He is named after the character Ebenezer Scrooge from ‘A Christmas Carol’. He is a rich businessman who is grumpy initially but still a lovable relatable character.

This tattoo is very similar to the cartoon picture of the character. It is made with strokes of black ink and shades of black and grey within the design. It is placed on the upper arm of the wearer and wrapped around like a sleeve. This tattoo is for every cartoon fan ever!

A mandala tattoo is a very famous design. The meaning of each mandala tattoo can vary from person to person. It is a symbol of perfection and balance, two things that are most needed in life. There are several cultures that see this design as a sign of their teachings and a way to understand balance in life. Generally, Mandala artwork consists of floral designs, however, there can be other designs with personal meanings.

This design is made on the back of the elbow of the individual’s hand. The design is floral and made with black ink. There could be color added if required.

If you’re a comic book fan and tired of the never ending battle between DC comics and Marvel, then this tattoo is your best choice. It shows two of the most popular characters of the comics, Batman and Ironman. They are self made heroes who fight crime to save the world. This tattoo is a representation of justice and your will to fight for it.

This design was made with strokes of black ink. It shows half face of Batman and the other of Ironman. It’s placed on the forearm of the person. It is a versatile design and can be gotten on any part of the body.

Sketch tattoos generally take a lot of time to complete. If you are a little sceptical about getting these tattoos, then you can ask your tattoo artist to make a temporary tattoo before getting a permanent one. If you liked these designs but want to explore further, you can also look at –