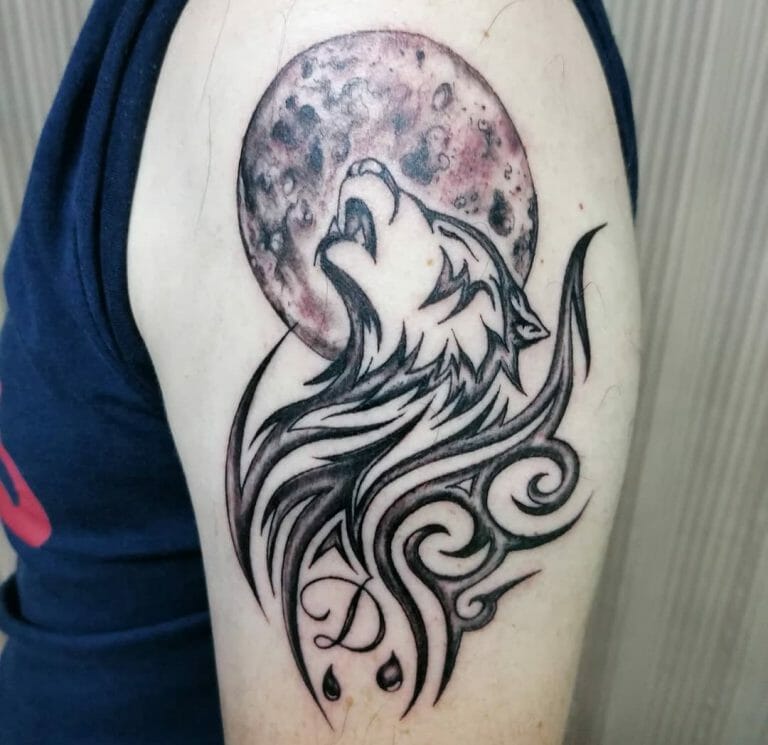 Cannot decide what to get between wolf or tribal tattoos? Why not get a simple tribal wolf tattoo instead? Listed below is the fuel for your creativity!

Wolf tattoos are a great way to show your dedication to loyalty.

The regal animal combined with the pattern of the tribal tattoo allows you to play with several symbolisms. In different tribes, wolves hold many different meanings.

In general, wolves are always seen in close family packs. Hence, if you Google, wolf tattoos broadly indicate your devotion toward the family, and also your will and determination to protect them in times of adversity.

One interesting observation about wolves would be, that they were treated with reverence and considered a good luck charm in many of the cultures spread across the world. For example, the Japanese, Mongolian and many Native American cultures regard wolves as spiritual guides, or in possession of spiritual energy who were benevolent to humanity when treated with respect, but should be feared as they possess the power to bring calamity if maltreated.

Are you a Ghibli fan? Then you are sure to know about this movie. You can express your love for wolves, tribal art, and anime all at the same time with this tattoo! In the tattoo, Princess Mononoke, a girl who was raised by a Japanese wolf stands with a blood-smeared mouth and her companion in a garb which seems like that of a fictional tribe. She holds a dagger and a unique looking mask. The touch of the red on the otherwise black outlining makes the tattoo stand out more.

Since Princess Mononoke was a symbol to protect nature, the tattoo shows your love for animals and the wild. Plus, both the mother wolf and Mononoke guarding each other with their lives represent a strong familial bond which stands tall against all the challenges thrown at them.

This tattoo with multiple wolves tells stories of many different tribes and cultures. In the centre, there is the Vegvisir symbol which is an Icelandic magical stave. At the bottom, A Valknut symbol can be noticed in the form of three intertwined triangles. Finally, there is the Viking Ragnarök symbol shown through the two wolves.

Each symbol has its interpretation. The Vegvisir for example helps to find the bearer way through rough seas, here the seas can be life. Valknut on the other hand is often thought to be worn by someone who will meet a violent end. Lastly, the Ragnarök calls for the war between gods and demons which leads to darkness. When taken together, all the pictures become a message which tells this person is unafraid of death and chooses to push through in the most difficult times. The simple wolf tattoo design, therefore, speaks a lot with very few brush strokes.

The tattoo paints a beautiful image from a bygone era. A Celtic woman is seen sitting on top of a wolf. She is wearing traditional clothing from that time. As the wolf runs, the hair of the woman is seen flowing in the air. She is playing the lyre. She is described as a wolf walker. What is worth noting is, that the tattoo artist has done the work in the style of Middle Age art, making the design even more fascinating with patterns on the body of the Celtic wolf. The sun is done like a bright star at the top of her head.

In Celtic mythology, wolves were considered sacred animals. Celts were so impressed with their hunting skills, that a deep connection was formed between the wolves and their mythology. Hence, a key value associated with wolves is that of a valiant warrior who is fierce and powerful. No doubt, being the wolf walker is the task of a valiant one.

For those desperately looking for a good cover-up tattoo design, we believe this will be a strong contender. The tattoo originally had a circular shape on the shoulder, which was skillfully filled in with imagination to create the new piece. Shackles and chains are tattooed around the central design. Two wolves can be seen with warrior garments looking into the distance. This piece is inspired by the North mythology, taken from the saga of Volsung.

Anybody interested in Viking sagas will be thrilled with this design. The two wolves are Sigmund and Sinfjötli. Together, they are avenging Völsung. Since this is a comparatively detailed piece, keep in mind, that you will need to book your appointment in advance, so your tattoo can come to life with all the details.

This is one of the specimens for simple tribal wolf tattoo designs. This design is great for beginners since this is one of the tiny designs which fits within a very compact space. The lone wolf tattoo is accentuated with the hues of the blue and purple present in the watercolour style. The wolf can be seen howling. One can almost watch the wolf calling for its pack under the moon.

The meaning behind a howling wolf is that of strong bonds with family and other loved ones. Moreover, the colour blue in wolves will represent understanding and loyalty, while the purple shade stands for royalty and mystery. So, this beautiful tattoo hints at a beautiful soul, and you can also show your family how much they mean to you through this gesture. The mastery of the artist is expressed through the shading which gives an added depth to the tattoo of the wolf.

The wolf head tattoo might look like one of the simple animal tattoos at first glance, but there is more to the unique design. The wolf head is formed with runes. The runes are not simply for show either, they have two names hidden within the apparent shape of a head of a wolf. For this tattoo, the names are Elie and Emma, and you can certainly customise the names to make space for your near and dear ones.

Since this is one of the howling wolf tattoos, as mentioned before, the point about loyalty to family is driven home. Those who prefer minimalism with meaningful actions will certainly love this piece as much as we do. This is done on the bicep, however, the tribal wolf tattoo design allows you much flexibility in terms of placement since the piece can easily fit anywhere else.

Geek alert! This is none other than Fenrir from Norse mythology. Although Fenrir met a fateful death, in the end, Fenrir was the one who was destined to kill Odin in Ragnarök. The snarling wolf is ready to pounce and hunt any moment in the tattoo. The sign in the middle is none other than the Nordic compass, or Vegvisir.

It does without saying, you will require assistance from a seasoned tattooist to get the details of the fur done perfectly. We love how, with one single colour, shading has given the tattoo more layers to bring the beast to life. However, great things call for great commitment. Be prepared for lengthy sessions as the forearm tattoo will take more than one sitting.

If you asked us, this is one of the most fun wolf tattoo designs we saw. The tattoo will be great if you are looking to get a matching tattoo with someone. While one half of the tattoo by itself makes complete sense, the other half when put side by side completes the picture.

The headgear on top of the wolf’s head is usually worn by the tribe head among the Native Americans. In Native American cultures, the wolf is an animal which denotes courage and strength. Under the wolf head tattoo, there is a quaint picture of the mountain in a circular frame reminding one of the importance of one’s roots.

One beautiful tribal girl is tattooed wearing the head of a wolf. The tattoo is further given an ornamental touch with the help of the mandala structures spreading like flowers on both ends of the tattoo. Finally, the touch of blue all over the otherwise monochrome tattoo makes the tattoo worth noticing. A glimpse of the bone necklace that the girl is wearing can also be seen.

The intricate design no doubt calls for the best people, so make sure to handpick your artist carefully. The colour blue in mandalas seeks inner peace and emotional healing. Making the girl the central figure, this tattoo is an interesting twice on the same tribal wolf tattoo ideas. The headdress of the wolf might look grotesque to some, but in many Native American cultures, it is taken as the symbol of a spiritual guide who protects souls in the afterlife.

This tattoo is done on the calf, but you can easily get it done on the forearm, your back or anywhere else on the body. Taking a sharp turn from Celtic or Nordic mythology, this one is done in the Polynesian style. Hence, the style of the wolf is different as well. For example, instead of realistic fur, we have a patterned face. The traditional Polynesian spearhead tattoo pattern can be spotted at the top of the tattoo.

In terms of meaning, the tattoo is in tune with other cultures. Themselves having various traditional tattooing styles, Polynesians regarded wolf tattoos as an expression of the combativeness and valour of the warrior present within every one of us.

So, are you a hunting type wolf or a protective type? Make no delay and express that with a cool and meaningful simple wolf tribal tattoo.

Since there are so many different types of wolf tattoo designs, we could not help but add a few more suggestions to be considered: