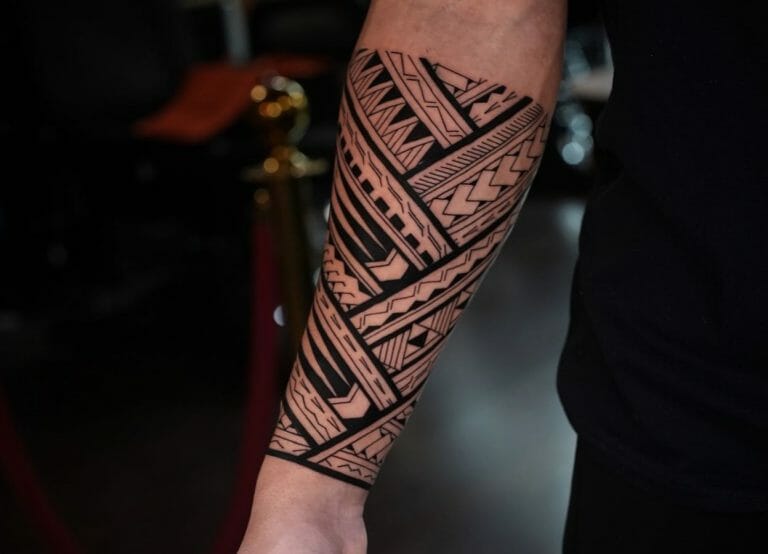 If you are looking for a tattoo for your arm, you have come to the right place. Here are some amazing simple tribal tattoo-arm ideas that will blow your mind!

There is a wide range of tribal tattoo designs that have become a part of the ongoing tattoo trend.

These tattoos are not only pleasing aesthetically, but they also have a deep meaning hidden behind them. Each tattoo has shared a story about heritage and culture and helps you express your thoughts easily.

Tribal tattoo designs were most popular among Native American and African tribes. Tattoos were a part of their culture and heritage for the longest time, so much so, that many men and women belonging to those tribes still get tribal tattoos. Tribal tattoo designs can be of any pattern and can symbolize different things. Each design is purposefully structured and full of sheer awesomeness. The most popular choice for tribal tattoo designs for men and women is the arm. Other locations on the body are the leg, chest, back, or even the neck. These tattoos are generally made with black ink or a thick dark color, however, people may add color according to their choice.

There is an effective yet simple way for a person to show off their culture, and that is with an armband tattoo. These tattoos can be very decorative and can look like you have been wearing jewelry. Such tattoo designs are also similar to sleeve tattoos as it wraps around the arm area. The meaning behind each pattern differs. Armband tattoos are generally made on the upper arm, however, they can also be made on the forearm or the wrist, like a watch or a bracelet. Many people associate arm tattoos with power and strength.

This tattoo is made with thick black ink and goes around the upper arm. The exact meaning of this tattoo cannot be deciphered, but it has deep meaning for the wearer. This tribal design would look great on the wrist, elbow, ankle, or any part of the leg.

Tribal designs can be extremely detailed, while there are other designs that are simple and minimalistic. The tattoo design’s meaning generally depends on different cultures which include patterns like animals and flowers. Some designs just contain some simple strokes or interwoven line work. If you are looking for a simple tattoo, you can choose to go for one without any color or big shapes, it will look elegant and will still have a purpose. The placement of the design is as important as the design itself. There were certain tribes of the ancient times that reserved some places on the body for a tattoo to get inked for high accomplishments.

This design is very simple and covers the forearm like sleeve tattoos. There are shapes that are made with thin black strokes and the inside is filled with lines and other f=de

Tribal art can be a way of conveying a message from the wearer which could mean different things like marital status, high achievements, or social status or hierarchy. This is a great way to give honor to their heritage and culture. There can be several different themes and designs to choose from. In most cases, guys who are tattoo lovers like to get big and bold designs on their arms so they can show them off. The most commonly sought-after design is sleeve tattoos which are creative and detailed and often tell a story. Sleeve tattoos generally cover up the entire arm, unless you go for half-sleeve tattoos. They may be painful depending on the area of the body, however, it is worth it!

This arm sleeve tattoo has several different shapes and designs that make up the entire sleeve. It is entirely made with black ink. The tattoo artist made the tattoo design with intricacy. This design is bold and beautiful and a top choice for tribal tattoos for men.

This is common among tribal tattoos for men and women. Tribal markings have been a part of many cultures from a very long time. They were used as symbolism for status in society and their rankings in the army. Mostly tattoos were made on the arm, however, ancient cultures considered some parts of the body to be sacred and those parts were reserved for tattoos by people of high rankings or status.

This design is made of different lines and symbols. It is made entirely with black ink. The designs by the tattoo artist are extremely well crafted creating a mindblowing pattern. Other places on the body where this design would look great are the rib cage, the chest, leg, or the neck. If you are considering getting a tribal tattoo, this could be your next choice!

Tattoo designs on the shoulder can be associated with power and strength. It is one of the most masculine parts of a man’s body. The area can also be considered flattering. It is also a versatile location where you can easily cover up the tattoo or easily flaunt it. The shoulder is also not a stretchable part, so it is possible that the tattoo will not fade away. This type of art is also used to cover different parts of the body with more details like the upper arm, chest, back, or chest.

This beautiful tattoo design starts from the chest, extends to the shoulder, and onto the arm and wrist of the person. It is entirely made of black ink. The designs are not intricate, but bold and decently spaced. This tribal arm tattoo can be your next choice of tattoo!

Tribal designs are a great way to feel closer to your ancestors. Many believe that tribal tattoo designs bring good luck to the person and their family. The designs are generally cool tribal art that is boldly defiant and has great quality. Such tattoo designs have style and look really cool. Designs can be inspired by their own ancient culture or any other culture they want to pay tribute to. These tribal tattoos are generally made in a sleeve pattern and are a great choice for tribal tattoos for men.

This design is a bold and flashy artwork. It is made with thick black ink. It starts on the shoulder and moves on to the upper arm. It has a singularly rugged display. If you look for such design ideas on the web, you may get similar designs, but this idea is just mindblowing.

Tattooing has been a very important part of Filipino culture for more than 500 years. They believed that tattoos can protect them from their enemies. Not only do they have a deep meaning behind them, they also look very pleasing on different parts of the body like the arm, leg, chest, and back. They compliment the body structure and are meant for both, men and women. The strokes of Filipino designs flow in a particular manner that makes them look unique compared to other ideas and designs.

This particular cool tribal design is made with black ink. This design is symmetrical and covers the forearm. It is wrapped around the arm like a sleeve tattoo design. There are other colors that you may add to the design to give it a different look. This tattoo is suitable for women and men alike.

This is another arm band tattoo designs for men. It can also be worn by women. A solid arm band generally means that it is made in an honor of a deceased loved one. However, adding symbols and different designs of the arm band tattoos makes it more meaningful and can be the representation of a culture.

This tattoo is made with thick black ink. It has a sun made in the center which could be a representation of life and brightness.

There are more than 1000 islands in Polynesia where tribal art is different and gives the people creative freedom. These tattoos are made with black ink traditionally and are very pleasing to look at. The placement of Polynesian tattoos is extremely important since it has a cultural reference to them. Before getting the tattoo, one must conduct thorough research on where to get it and what designs may be suitable for you.

This tribal tattoo covers the entire arm. It is made with black ink and has different symbols made on it.

This beautiful tattoo is of a Celtic knot placed on the upper arm. It is made with shades of green and a golden border that gives it an elegant look. There could be multiple knots or just one knot, it would still make an amazing tattoo!

If you liked these ides and are looking for some tribal designs, here are some other tattoo designs that you may like –