101 Best Simple Joker Tattoo Ideas That Will Blow Your Mind! 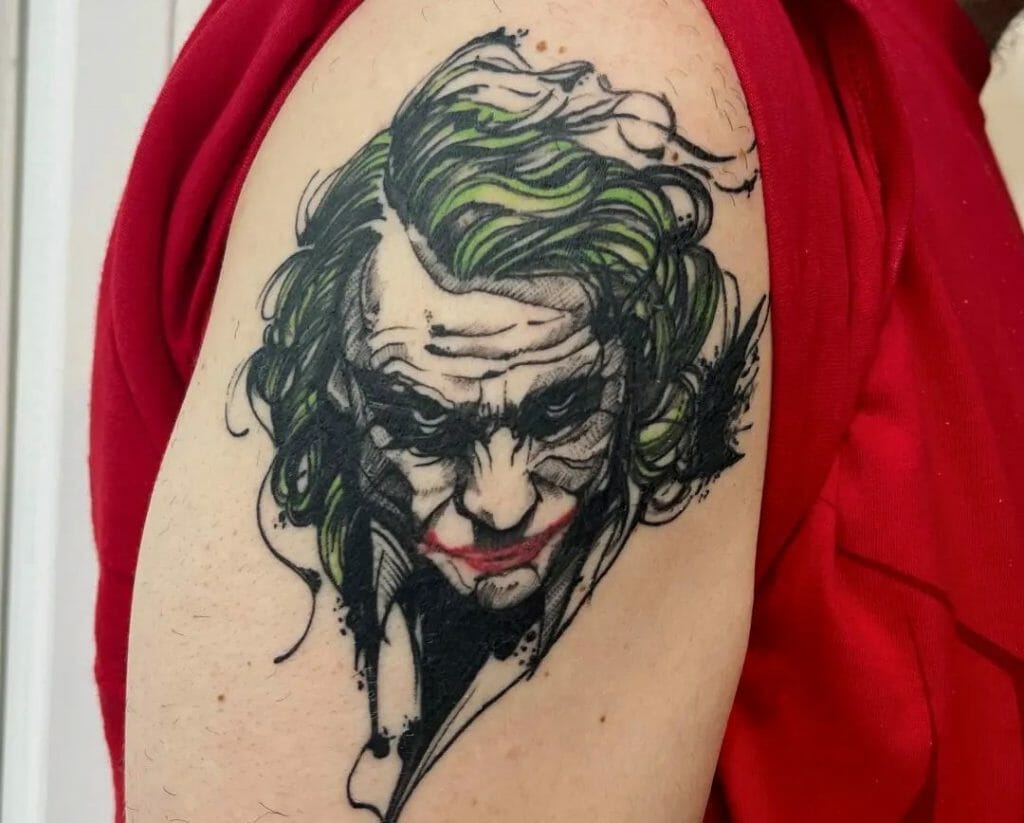 Do you want to get yourself inked with a ravishing yet simple joke tattoo? Then we’ve might help you as we’ve already enlisted the best designs!

A joker aka a clown is a very popular character that one can spot in various circuses all around the world.

This simple character gained immense popularity when DC comics in 1940 launched a character named Joker as one of the main villains from the Batman comic series. In no time Joker became the most loved and well-known villain and even after so many years that popularity continues.

In reality, Jokers are fun-loving beings who joke and cheer up people around them. But a Joker tattoo meaning is a lot darker. There are many meanings of a Joker tattoo. It is seen as a sign of the dark side or part of a human’s life. It is also a symbol of perseverance and the never-ending cycles of life. A Joker represents mystery, mischievous as well as playful nature.

If you are a big fan of Joker then you must get yourself tattooed with a gorgeous joke tattoo. And if you are confused and can not find a tattoo design that will suit you and your personality, then you do not have to worry. Here we have hand-picked the most eye-catching joke tattoo designs for you guys.

Joaquin Phoenix is a very famous American actor. He played the role of the famous villain in the 2019 movie known as Joker. This Joker is a movie adaptation of the famous DC comic character Joker. This was a brilliant movie and was loved by many critics. If you are a fan of Joaquin Phoenix’s Joker then here we have the best tattoo idea for you guys.

In this Joker tattoo, the tattoo artist had inked the iconic character with the same attire that he wore in the 2019 movie. He is wearing a dark green shirt along with a yellow waistcoat Over the yellow waist court he is wearing a red blazer. The face of this iconic character is painted with white color. He has drawn a big and long red smile around his mouth and has also colored his nose red. He has painted blue diamonds around his eyes and has dyed his hair with neon green dye. This was the exact look the Joker had chosen before the iconic interview scene later in which he would murder the T.V host on a live show.

Before Joaquin Phoenix played the role of the Joker in the 2019 movie it was the late Australian actor, Heath Ledger who was embraced and loved as Joker. Ledger was cast to play the character of the Joker in the 2008 movie, ‘The Dark Knight’. This movie is a part of the Dark Knight Trilogy which revolves around Bruce Wayne popularly known as Batman. Critics had immensely appreciated Ledger’s work. But sadly Ledger demised in January 2008 just before the movie was released.

The tattoo artist has inked a lower forearm tattoo and has made use of vibrant colors which is making the tattoo look very realistic. This is a very famous scene from the movie ‘The Dark Knight’. Here we can see that the Joker has leaned out half of his upper body from a motioned car. His hair is flying backward due to the immense sir velocity. His face is smeared in white color and has applied a red tone around his mouth. Behind his car is there is a black car that is chasing him. This scene took place at the night there the streetlight is shining brightly.

A joker’s face is mostly associated with mischief, evil motives, and pranks. Joker is considered to be the biggest trickster. If you love pranking people then here is a Joker face tattoo for you guys. In this tattoo, the tattooist has drawn a traditional black Joker tattoo on the lower forearm. The Joker here has a very mischievous smile and a cunning look on his face. And he is holding a joker card in his hand. This joker’s face is adapted from the animated Batman show.

A Joker card tattoo is often associated with a wild card and sometimes as a card that carries good luck. In the poker world, it is seen as good fortune whereas generally it is associated with deceit and bad fortune. If you are a poker over here is a Joker card tattoo. This tattoo has been inked on the arm. One straight Joker is wearing a clown cap and there is one inverted Joker in the same clown attire. They are juggling the symbols of the four French suits. At the correspondent corners, the word Joker is written in capital letters with the help of black ink.

This is a unique body art that has been inked by the tattooist. In this arm piece, the tattoo artist has drawn both the Jokers played by Joaquin Phoenix and Heath Ledger. And this is a famous drawing from medieval times. This picture consisted of Adam and his link to this tattoo, the tattooist has replaced Adam with Joaquin Phoenix’s Joker and the God with Heath Ledger’s Joker. In which Ledger’s Joke is trying to pass a card to Phoenix’s Joker. Heath Ledger Joker is surrounded by demonic creatures, symbolizing his death. Both the Jokers are wearing the most iconic costumes from their respective movies. On the top, there is a line quoted which says that “I just hope my death makes more cents than my life.” If you are a Joker fanboy or fangirl then this would be the best tattoo design you will ever find.

Harley Quinn is another popular DC comics character. She is considered to be the female version of the Joker. And she is also their love interest of Joker. Both males and females can get themselves inked with a Harley Quinn tattoo. In this tattoo, the tattooist has inked a Joker and Harley Quinn tattoo on the upper thigh. This tattoo is made with vibrant color. Where Harley is wearing pink and blue makeup with matching attire. On the neck, there is a small Joker face tattoo who has green hair and a white face.

Chest tattoos are now of the most famous and common tattoos. Here is a Joker face chest tattoo. The tattoo has drawn only the face of the joker with the help of black color ink. He has messy locks and has smeared black color around his face, which is quite visible as it is a traditional black tattoo. There are fine lines on his forehead and wrinkles at the corner of his eyes. If you are a big fan of this comical villain then you should get yourself inked with such a stunning tattoo design.

The tattooist has made a traditional black joker tattoo on the arm. There are two Joker-faced balloons. One that is on the left side is a happy and smiling joke face. And the other one that is on the right side is a melancholic Joker face. The string of both the balloons is tied together. This depicts that human life has both good and bad sides. The entire tattoo has been inked with the help of black ink. The clowns are wearing their Joker makeup and have caps on their bald heads.

Minimalist tattoos are loved by everyone. Therefore here is a minimalist Joker tattoo idea that might allure you guys to get yourself inked with one. This Joker tattoo has been on the upper arm region with the help of black ink. The Joker is standing with a balloon in his hand. There are black and white stripes on the balloon. And the Joker is wearing a dual-color jumpsuit that has big Polka dots on it. The left portion of the jumpsuit has white Polka dots on black color fabric, whereas the right side has black polka dots on the light color fabric. The cap that the Joker is wearing also has black Polka dots on it. The dual colors are a symbol of the duality one will face in life. That life will always have a good and a back side and one needs to adjust himself or herself accordingly.

Joker Smile is the most recognizable symbol that is associated with the Joker. Here is a classic Joker’s smile tattoo that would look ravishing on you guys. This tattoo has been inked right on the top of the palm. It had the smiling red mouth of the Joker. And this tattoo is surrounded by the word “ha-ha” in capital red ink.

What is a simple joker tattoo?

A simple joker tattoo is a design that features the iconic character of the joker from Batman. The joker has been portrayed in different ways over the years, but his most recognizable look is a white face with bright red lips, green hair, and black-and-white clothing. This classic version of the joker is often used in joker tattoos, either in black-and-white or with vibrant colors to create a unique look. A simple joker tattoo can include elements such as playing cards, dice, and the classic smile of the character. It is often done in large scale, allowing for plenty of detail and intricacy to bring out the character’s personality and express the wearer’s love for the classic villain.

How much does a simple joker tattoo cost?

The cost of a simple joker tattoo will depend on the size and detail of the design, as well as the artist’s rates. Generally speaking, custom tattoos can range anywhere from as little as $50 to several hundred dollars. The cost of a larger or more detailed design could be significantly higher than that. It is always best to consult with the artist prior to getting a tattoo in order to get an accurate cost estimate. In addition, certain factors such as location and experience of the artist can also affect the final price of the tattoo.