10 Best Side Face Tattoo Ideas That Will Blow Your Mind! 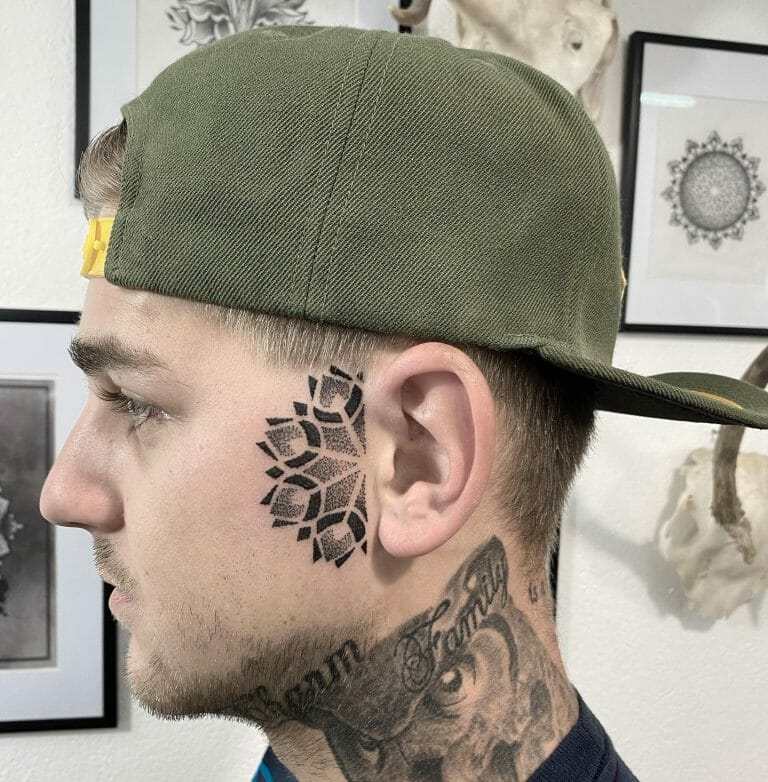 If you are a big fan of stars like Mike Tyson, Wiz Khalifa, or Post Malone, then a side face tattoo is the right choice for you to get inked.

It is true that getting a face tattoo on the side is quite unique and weird but there is no denying the fact that it is one of the coolest places to get inked on the body.

Face Tattoos became a symbol and gained popularity in the tribal culture who were also the inventors of tattoos. Now again in the twenty-first century, it is becoming extremely popular both among males and females through celebrities like Justin Bieber, Lil Wayne, Chris Brown, Adam Levine, and many more such people who have inked themselves on the side face, forehead, or cheek.

Before getting a face tattoo on the side you must make sure of the design and choose the size of the tattoo carefully as it is the portion of the body that has sensitive skin.

Before the invention of weapons like guns, missiles, and grenades used in modern warfare swords and shields were the major weapons used to conquer and protect globally. From that period onward sword became the symbol of power and strength. When done as a tattoo on the side face it looks both magnificent and terrifying and the colour of ink choice is mostly black.

Now sword has its unique designs in the earlier ages like the Romans and Greeks used a small kind of sword while the Arabs and Persians used the scimitar which was a curved steel sword design. In modern times, they have become museum artefacts but when they are done as tattoos the symbols they reflect are authority, courage, protection, power, and strength. In some gang culture, the sword done on the face represent an assassin. The sword tattoo is mostly done by men and also reflects a sexual meaning comparing it to the phallus.

Ranging from medium size mandala to a small single shape geometric facial tattoos can express multiple and varied meanings. They can be either inked on both sides of the face or on a single side, depending on the person getting it. Black ink is the preferred choice of colour and is done by both males and females.

The first and foremost features demonstrated by the geometric face tattoos are stability, order, and harmony. While getting inked with these designs one must choose an efficient tattoo artist as a small mistake would be very visible as the whole concept of these tattoos depends on precision and symmetry. Each and every shape has its own significance like the circle represents life’s cycle, the triangle represents Holy Trinity, and the square demonstrates balance and stability. They can be either done with a single pattern or in an overlapping manner using multiple geometric patterns to extract the desired meanings.

You are probably acquainted with the concept that a small effort can make a big impact, from life problems to the tattoo world this idea is applicable. These small face tattoos on the side are particularly popular among women for their subtle yet elegant nature. They can be flaunted easily and can also be kept hidden with hair locks and this gives this design an extra advantage.

The most popular design choices for these small face tattoos are stars, moon, flowers, numbers, hearts, and many more such ideas. Like multiple designs, these side face tattoos can have a range of meanings from honour, strength, and joy to love, family, and freedom. From traditional black ink to colourful inks anything can be used and depend on the tattooer.

Long considered to be used as a symbol of contentment to God, each flower represents different meanings. Like a daffodil represents faith and honesty, whereas a daisy is done by someone who is bold yet sentimental. Lotus has been long associated with spirituality while rose with love, desire, and grace. A classic tattoo design capable of providing a powerful message has now become a more popular tattoo choice after a rose tattoo has been inked by Adam Levine of Maroon 5 on his side face.

People who want to flaunt both meanings and masculinity mostly get inked with the tribal meaningful face tattoo. The tribal face tattoos demonstrate the rich history of the tribes and make the tattooer look like an ancient tribal warrior. Mostly done in black ink with some highlights made with white ink the tribal designs done in as face tattoos mostly belonged to the Bronze Age and were done by warriors to indicate from which tribes they were from.

Tattooed in an abstract manner with bold ink lines they can signify lineage for some people going back hundreds of years. They can also be done as a token of honour paying homage to the ancestors of the tattooer. The tribal face tattoo will vary from culture to culture not only in its design but also in its meaning and has always been considered a symbol of strength, protection, power, and achievements.

Recently in the tattoo industry quote tattoos are in great demand as told by the tattoo artists. Tattooing with quotes was specially done on the body portions of the chest, arm, and legs but doing it on the face is a bold move and a way of self-expression. They can be either done in simple fonts or with cursive fonts in an illustrated manner. The choice of ink colour is mostly black and the size can range from small to medium depending on the face size of the person.

A work of tattoo inspiration these face tattoos on the side makes a solid statement and are a great way of providing motivation to the tattooer and others. As this is not a temporary face tattoo the quote selection must be done carefully. The quotes can be about anything like strength and struggle, self-love, positive energy, something empowering, or heartwarming love. Choose a quote tactfully according to your trait and make an identity for yourself with these face tattoos. Sensational singer Justin Bieber even has a ‘grace’ tattoo written just above his eyebrows.

Also known as stippling in the dot work tattoos the artists use multiple dots to attain a striking image. From abstract patterns to conventional designs all can be done with this method where the dots can be either used for shading or the whole tattoo work can be done in dots. Black and grey ink is the preferred choices but some people also use the red ink for its effect.

The dot works can be either done with the conventional machines or with the hand-poked method. Whatever process is selected these face tattoos are not only time-consuming but also not for the people who are faint-hearted.

The star tattoos are one of the most versatile face tattoos whose meaning can vary from universal to personal. The number of stars can vary from single to multiple and the size of the stars totally depends on the tattooer. The choice of ink can range from basic black to multiple colours and these face tattoos are both popular among males and females.

Now different shapes and numbers of stars demonstrate different meanings. The star with five pointy ends mostly represents nationalism as it can be found in flags of many nations while again when done with lines coming from the centre represent the nautical star or the sailor symbol. Stars with six pointy ends demonstrate the star of David while that with eight pointy ends are known as the star of Laksmi. Many celebrities have done this face tattoo and one of them is Kat Von D.

Side Face Tattoo By Ear

One of the most delicate places to get inked these face tattoos are quite painful to get but really look magnificent. From traditional designs to unique ones can be inked in this area and the size depends on the amount of pain one can bear. The choice of the colour for getting inked is mostly black and they are done both by males and females.

As it is a very delicate place most tattoo artists take quite a long period of time to get these designs done. The popular designs for these face tattoos on the side are sea waves, spiders, leaves, simple lines, flames, roses and many more. They can be done in and around the lobe, tragus, and helix area of the ear.

The heart is one of the most common designs that is found around the world which can represent different meanings. For a long time, it has been the symbol that demonstrates not only passion and love but also companionship and compassion. Mostly done in different parts of the body like the wrist, ankle, and forearm they are now even being done as side face tattoos. The choice of face ink is mostly black but red is also preferred by a few people.

It can be either done as a simple heart symbol, a broken heart or an illustrated one with intricate designs. Now the intricate design is not for everyone as these face tattoos hurt if done with many details.

Face tattoos on the side are not for everyone as it is quite a painful process and people with diseases like high blood sugar are heavily discouraged from getting these tattoos as they can even lead to infection.

Other tattoos which can be done on the side face are: