101 Best Shisa Dogs Tattoo Ideas That Will Blow Your Mind! 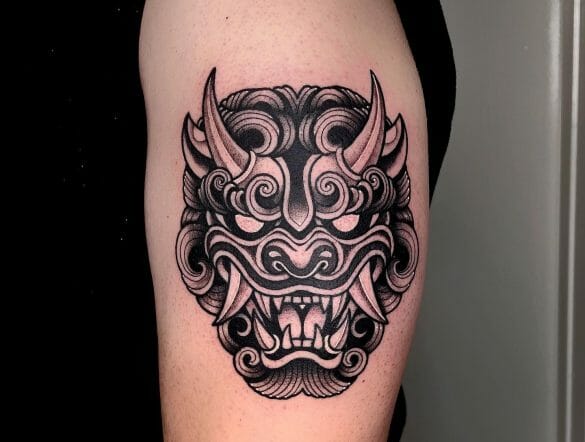 Foo dogs are a very common element in traditional Chinese tattoos. If you love them as well, then these amazing Shisa dogs tattoo ideas are just for you.

Foo dogs are basically Chinese guardian lions which are used as ornamental statues.

In the traditional Chinese culture, these guardian lion statues are usually made out of stone. They are used as architectural ornaments in temples and other places.

These statues were very famous in China and Japan. The idea of a guardian lion originated from Chinese Buddhism. That is why these statues are very common in Buddhist temples. When Westerners visited Japan and saw these statues, they mistook them for dogs instead of lions and that is why they named them Foo dogs. Now the term is widely popularized and widely used. There are different types of Foo dogs as well. The foo dog with its mouth open was called Shishi or Shisa. While the one with its mouth closed resembled a dog and was named as Kumainu. The male foo dogs were shown with a ball in their palm while the females were depicted with a cub. This male and female dichotomy also represented Yin and Yang. These lion tattoos are a very common theme in traditional Chinese and Japanese tattoos as well. If you are also a fan of foo dogs and want a tattoo related to them, then we have the perfect tattoo ideas for you.

Foo dogs can be fierce, but depending on the design they can also look really cute. If you are looking adorable but detailed foo dog tattoo, then this tattoo idea is perfect for you. It captures the symbol of the foo dog perfectly in a small but adorable tattoo. These guardian lions are supposed to protect you from evil spirits. This tattoo not only looks amazing but are also supposed to bring you peace and happiness. If you are a fan of foo dogs but do not want a traditionally large tattoo of them, then this tattoo idea is just what you need.

Foo dogs are guardians who are believed to protect you against evil. They also represent peace. These statues are used in many important buildings for the same purpose. These amazingly detailed forearm sleeve tattoo is a perfect example of a foo dog tattoo being modernized and made into a more contemporary tattoo. There are elements of both traditional and modern art in this tattoo and that is what makes it so unique and stunning. The design is perfect for anyone who is a fan of the oriental tattoo style, but also want a bit of modern touch in their tattoo. This tattoo is made in black and grey, but if you want a colourful tattoo instead, you can ask your tattoo artist to make the perfect design just for you.

The colour red is often widely used across Asian tattoos. It is an auspicious colour, and it also looks really great against black. This tattoo is a perfect example of that. The tattoo features a detailed full-bodied foo dog done in black ink with red highlights to bring out the tattoo art to the foreground. It looks really amazing and unique because of that. If you are more specifically looking for a male or female foo dog, then you can do that too. Ask your tattoo artist to design the foo dog tattoo with a ball under its paw and it will be a male, and ask them to add a cub to the tattoo to make it female. You can even get both done and it will then represent Yin and Yang. This tattoo will look good on any part of your body like the arm, chest, and thigh.

Hand tattoos are really popular but they can also be pretty painful to get. If you are not afraid of a little bit of pain and want a really badass tattoo on your hand, then this idea is just what you need. It is a vibrant and colourful tattoo of a Chinese lion hand tattoo. The tattoo features the face of the foo dog and it looks really amazing because of the art style and the colours. This tattoo features yellow and purple but you can also opt for red and green as they are also very popular colours in this type of tattoos. You can also get these tattoos in pairs on both your palms to complete the look.

This particular tattoo starts on one side of the chest and covers half of the arm. It is a really stunning tattoo design. It is a big tattoo that is going to hurt a lot to get. But in the end, the tattoo will end up looking amazing. So if you are not fazed by pain or are used to getting tattoos, then this tattoo is perfect for you. It depicts the face of a stone statue of a foo dog. It also has some other elements like the lotus flower and other floral designs. If you want a full sleeve and chest piece, then you can talk to your tattoo artist and ask them to add more traditional designs into the tattoo. You can also get a foo dog and dragon tattoo as they are very famous as well.

Some people prefer smaller tattoo designs over large ones. This tattoo depicts the face of a foo dog in amazing details. It also has red accents that make it come to life. Foo dogs are the symbol of protection against evil and they are believed to be our guardians. The details on the tattoo make it even more stunning to look at. In the Japan, China and even Korea, these foo dogs are really famous. Many commercial structures also have their statues in them to gain protection from evil. This tattoo will look good on anyone’s arm or forearm.

If you are a fan of more colourful oriental tattoos, then you need to see this tattoo. The tattoo depicts a full bodied foo dog on the forearm of a person. It is done in red, yellow and green. Foo dogs are believed to be our guardians and the fierceness of the tattoo really brings out their symbolism. The foo dog in the tattoo has a ball under its paw, which means this is a male foo dog. But if you want a female foo dog instead, you can ask your tattoo artist to replace the ball with a foo dog cub. You can also get these tattoos in pairs to truly capture the symbol of Yin and Yang with their duality. Many people also get Shishi and Komainu tattoos together in a pair to complete the set.

Foo dog tattoos are really famous in Asia, as well as the rest of the world. These guardian lions have a deep symbolism of protection against the evil and that is why they are really famous in Asian feng shui. If the foo dog in the tattoo has an open mouth, then it is a Shisa dog , and if it has a closed mouth, it is called a kumainu. These tattoos will bring positive energy into your life. This particular black ink tattoo is depicted with a ball, which means its a male foo dog. You can also get a similar tattoo of a female foo dog on your other arm to complete the pair.

Back tattoos done in the traditional Chinese and Japanese styles look really stunning and badass. And this tattoo is no different. This tattoo of a foo dog’s face captures a lot of details an covers the entire upper back in a beautiful design. The Chinese art style looks amazing on the wide back. You can also ask your tattoo artist to incorporate some colour into the tattoo to make it even more eye-catching. If you want a full back piece, you can also incorporate more Asian mythological elements into your tattoo and make it into a large art piece that covers your entire back.

Tattoo sleeves are really popular amongst tattoo lovers all around the world. And Foo dogs are supposed to bring good fortune to you. This arm sleeve features a foo dog’s front side in really bright colours. The tattoo does not only have a foo dog though. It also has a lot of other traditional Chinese elements that complete the tattoo. It covers the whole arm in bright colours and amazing designs that will make you stand out in a crowd. You can also get a similar design as a leg sleeve tattoo if that is something you want.

If you did not find your perfect tattoo designs in this article then you do not have to worry. We have some more amazing tattoo ideas just for you.

What is a shisa dog tattoo?

A shisa dog tattoo is a type of Japanese body art that originated in Okinawa. It typically depicts a pair of guardian lion-dogs, one with an open mouth and the other with its mouth closed. The symbols are used to ward off evil and bring good luck to their wearer. The design has become increasingly popular around the world as interest in Japanese culture grows. Shisa dog tattoos are usually brightly colored and feature intricate details such as eyes, wings, and other flourishes. They are often placed on the back or arms of the wearer and can be combined with other design elements to create a unique tattoo that reflects their own personal style. The shisa dog symbol is also believed to bring good luck and protection to its bearer, making it a popular choice for those seeking spiritual guidance or protection. Whether you’re looking for a unique tattoo with personal meaning or simply want to follow the trend, a shisa dog tattoo is an excellent option.

How do I choose a design for my shisa dog tattoo?

Choosing the right design for your shisa dog tattoo is an important decision that should not be taken lightly. First, consider what you want to express with the tattoo and how this relates to the symbolism of the shisa dog. You can choose from a variety of designs, including traditional Japanese-style shisa dogs or more modern interpretations. Consider adding other elements to the design, such as flowers, waves, or stars. You can also create a unique design by combining several different images and motifs into one cohesive piece. Once you’ve decided on a design that speaks to you, it’s important to find an experienced tattoo artist who can bring your vision to life.