101 Best Serotonin Tattoo Ideas You Have To See To Believe! 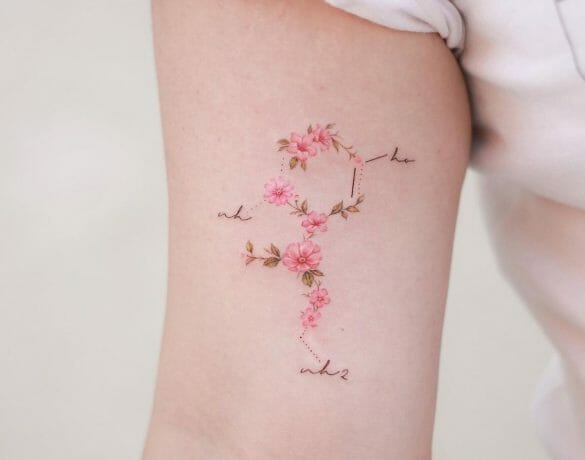 Looking to get inked with a serotonin molecule tattoo? Check out these amazing serotonin tattoo ideas and pick your favourite!

The human body is comprised of the delicate interplay of several chemicals and serotonin is one of them.

So, a serotonin chemical structure tattoo has become a mental health tattoo. For those going through depression or mood swings, their serotonin tattoo design can remind them to try and be calm and happy through huge changes, tough situations, and challenging days. A serotonin symbol tattoo can be a way to motivate yourself and pull yourself through the darkest days. Interestingly, getting inked releases serotonin in the body, so that can be a boost of happiness for you, as well.

Flowers are known to incite a happy reaction from most people. So, a floral serotonin design may be all that you need to keep your chemical imbalances and serotonin levels in check. Here, the chemical structure of a serotonin molecule has been inked, with delicate purple flowers adorning the piece. Such a tattoo would look great on the arm, as pictured.

The aesthetics of linework tattoos are a matter of immense beauty. Check out this serotonin tattoo, which is combining the elements of intricate linework and natural elements. Even though the tattoo has a lot of symbols inked together, each symbol is standing out due to the precise way in which the artist has inked it. In other words, such a tattoo would be perfect for those who like attention to detail.

For artists, the easiest way to get past feeling low is through creating art. So, a permanent serotonin art on your skin can be the best way to express the complex relationship you share with your mental illness. Here, the serotonin molecule seems to be coming out of a pill, with a beautifully vibrant background made to mimic a painting. Such serotonin designs are rare to come by.

Out of the different ways to create tattoos for mental health, this design is unlike any other. The two halves of the woman’s face depicted in this image are portraying two different emotions. Such a tattoo is a way to mark the severity of mental health issues and the tough life of those who have to live with imbalanced serotonin levels, which leads to mood swings and bipolar disorder.

For many people, the moon is a reminder to stay strong and keep on shining despite hardships. So, a serotonin and moon tattoo can be the perfect way to depict that meaning. Here, the moon is looking quite animated due to its facial features. The serotonin has flowers all around it, which are further elevating the appearance of the tattoo.

Whale tattoo meaning is associated with positivity. So, it definitely makes sense to get a cool whale serotonin tattoo, as pictured above. Here, half the whale has been inked realistically, while the other half is a blue geometric structure. The shading of the whale has further brought it to life.

The space is a source of endless fascination for many people. That is a common reason for getting inked with space tattoos. So, if the majestic elements of the universe bring you joy and help you stay strong, you can opt for a serotonin space tattoo like this one. The planets on both sides, with the moon and stars, are framing the serotonin perfectly.

This vibrant honeycomb tattoo is a fun take on serotonin tattoo designs. The honeycombs here have been arranged in a way to mimic the chemical structure of serotonin. The tiny bees and bright blue flowers are the ideal addition to such a tattoo. Designs of this kind are the ideal reminder to prioritise your own mental health.

For a lot of people, nature can fill the gaps left in their souls because of depression or any other mental health issue. Hence, you can ask your tattoo artist to recreate this tattoo on you, as a mark of hope and strength. The serotonin here has mountains on top with pine trees in front of them. Even though the tattoo is monochromatic, the light and dark shading is creating an attractive visual appeal. Such tattoos convey more than words ever could.

With traditional tattoos becoming a thing of the past, 3D tattoos are all the rage these days. Check out this 3D serotonin tattoo, portraying the serotonin neurotransmitter in a jar, along with its molecular structure. The precise use of grey and black ink, along with white detailing is underlining the realism of this design. The shape of the chemical jars is also a perfect depiction of the serotonin molecules.

Now that you have the answer to, “What does a serotonin tattoo mean?” and have checked out the various designs used to depict this neurotransmitter, you can easily pick a design of your own. Serotonin tattoos can be made really profound, to hold meanings that cannot be conveyed through a sentence. A quick compilation of serotonin tattoo ideas are-