10 Best Semper Fi Tattoo Ideas You Have To See To Believe! 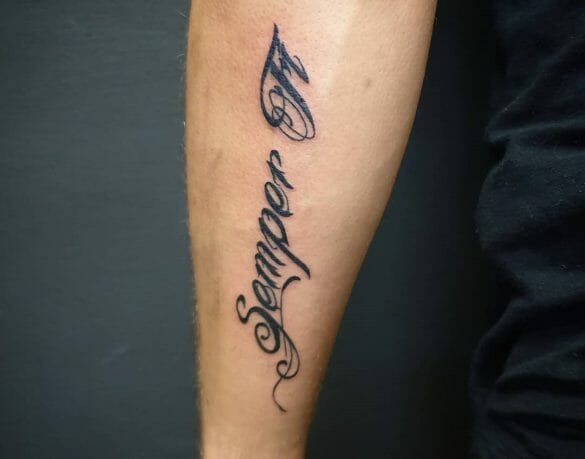 Semper Fi tattoos are one of the most popular Marine Corps tattoos.

The United States Marine Corps are a part of the American marines services. These USMC tattoos are most popular among people who protect the country serving in the Marine Corps.

These people pay respect to the armies through this marine tattoo. If you wish to know the Semper Fi tattoo meaning, then you should know the literal meaning of the words, Semper Fi or Semper Fidelis, which means ‘always loyal’ or ‘always faithful’. Now if you’re wondering about what is a Semper Fi tattoo idea, then you can wear them as simple word tattoos, or form the tattoo in a different way by including their logo, which includes an eagle, an anchor, and the globe or the world, or by including the design of sea in the tattoo. Choose a quality design from the list below.

Word tattoos are quite popular. People ink word tattoos as names, messages, and even as motivation for themselves. Semper Fi is one such word that many people would choose to get inked, like the picture above. It is a large word tattoo idea done in a beautiful font. The word tattoo reads ‘Semper Fidelis’ and it’s tattooed across the chest of the wearer. The location of this tattoo idea clearly dictates that the words and its power mean a great deal to the wearer. They pride themselves for serving in the army and protecting the security of their nation and they want to carry it close to their heart.

The logo or official emblem of the military services unit, United States Marine Corps include the symbols – an eagle, a globe, and an anchor. The eagle symbol represents the United States, while the globe symbol means that the commitment of the Marine Corps extends around the world, and the anchor symbol represents their duties and their close association with the US Navy. The picture above is of an old school style black and grey USMC tattoo idea of the logo of the military services unit, US Marine Corps. The gorgeous sleeve tattoo has the words ‘Semper Fidelis’ written above the globe, eagle, and anchor symbols.

Native American tattoos not only have beautiful designs, every style and design also has a rich history behind it. Every tribe has its own story, own heritage, and rituals that they tell through their tattoos. These tattoos usually have some common elements, like feathers, animals, dreamcatchers, and more. These elements hold great significance to Native Americans. The picture above is of a beautifully designed native American tomahawk with a wooden handle. The handle is adorned with intricate designs and a few feathers. The word ‘Semper Fi’ is written above the tattoo.

Skull tattoos are quite infamous for the negative meanings they bear. They are largely associated with death, but they have some positive symbols to them as well. Like, rebirth or new beginnings and incorporated with ‘Semper Fi’, they might mean that the wearer doesn’t fear death and will lay down their life for their country. The picture above is of a tattoo idea of a large skull with a design of a shield that has the words, ‘Semper Fidelis’ written on it. The details of the black and grey tattoo are done so beautifully that it’s looking like a realistic tattoo idea.

Semper Fi Marine tattoos are most popular among veterans or the soldiers that are still serving in the army and protecting in the military services unit, US Marine Corps. However, other people with a lot of love for their country and respect for the soldiers can also get these marine tattoos. Like, the picture above is holding a beautiful tattoo idea of many soldiers probably at the battlefield, yet they are working together to post a waving United States of America national flag. The words ‘Semper Fi’ is written below in a large font and the shading work with a modern touch is looking extremely gorgeous.

Sleeve tattoos are very common and the artists get plenty of freedom and space to design creative tattoos. You also get many options, like – half-sleeve, 3/4 sleeve, or full sleeve. The picture above is of a beautiful sleeve tattoo drawn in black and grey ink. The tattoo idea is of the United States Marine Corps emblem with eagle, globe, and anchor. Abbreviation of US Marine Corps ‘USMC’ is written above, and their motto ‘Semper Fidelis’ is written below. The number 0311 of this USMC tattoo idea is the code for the branch of the military services, ‘infantry rifleman’ while 3/1 stands for someone enlisted as a Commanding Officer of 3rd Battalion, 1st Marine Regiment.

Black and grey tattoos are one of the oldest styles of tattoos to exist. The root of these tattoos lies in Chicano style of tattoos. Chicano tattoos have a history steeped in the Native-American culture and movement. This Chicano movement inspired the Chicano Art Movement which happened in order to create their own identity in art. From there on Chicano tattoos started, which gave birth to black and grey tattoos and realistic tattoos. The picture above shows a word USMC tattoo idea of the Marine Corps motto, ‘Semper Fi’. The Semper Fi forearm tattoo is drawn with bold lines drawn in a beautiful font in black and grey ink.

‘Semper Fi’ or ‘Semper Fidelis’ is the motto of the US Marine Corps. Hence, it’s pretty easy to understand that the national flag of their country is one of the things the soldiers are fighting for, so the flag means a great deal to them. The picture above shows a beautiful word tattoo of ‘Semper Fidelis’ written across two forearms of the wearer. The large fonts of the word seem to be filled with parts of United States flag colours. The Semper Fi tattoo on his left arm and right arm, when two arms are put together, the tattoo idea is giving the impression of the full flag.

‘Semper Fidelis’ is a word that not only soldiers, but many people who also love their country hold dear to their hearts. They take pride in this Marine Corps motto. It’s mainly popular as the motto of the United States Marine Corps, but many other military units or armed forces, a family here and there, towns, and schools also use this motto as their own. The picture above is a charming word USMC tattoo of ‘Semper Fidelis’ written in an intricate font. The sleeve tattoo not only looks beautiful, but its position also entails that the wearer wants to show their love for the US Marine Corps.

If you have found the design that is the suitable quality tattoo for you, then kudos to you. However, if you’re still looking for one, then we advise that you read on.

There are many t-shirt designs that you might like. Take that to the tattoo artist to get the design inked.

Unlike the Navy, the US Marine Corps word both on land and sea. Hence, you can accentuate that in your tattoo by including some additional designs.

If you have friends from the army, then you can choose a design and get inked together to strengthen your bond. The matter of the design can be related to Semper Fi to express your love for your country.