10 Best Semicolon Butterfly Tattoo Ideas You Have to See to Believe! 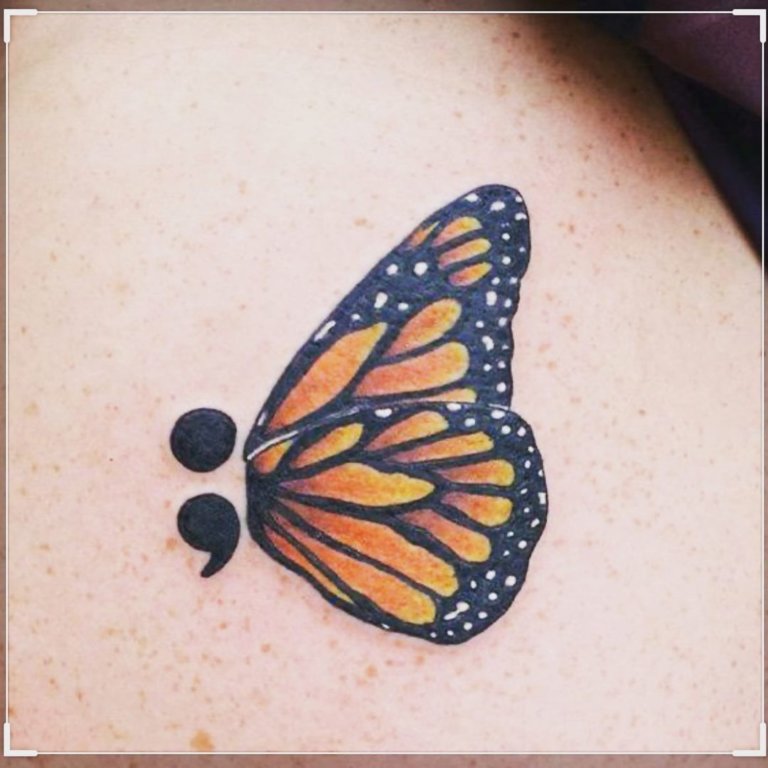 The semicolon is a widely used punctuation mark to join two related clauses with each other.

In the world of literature, the semicolon symbol is used by authors to show that they choose to continue a sentence instead of ending it. In this way, the semicolon represents a new beginning and a person’s ability to overcome struggle.

Semicolon tattoos are used as a method to show solidarity towards mental health issues like depression, self-injury, and suicide or suicidal thoughts. When combined with the butterfly, semicolon tattoo designs take a new twist as the butterfly is used as a symbolism of freedom and independence. A semicolon butterfly tattoo can be a great empowering symbol to your body if you wish to represent your mental health and show how you have found peace and are looking to continue your story despite all the problems that you have faced in your life as you stay strong and face the world with new hope.

In recent years, the approach towards depression and other mental health issues has changed and there have been programs and events that aim towards educating people about the stigma attached to finding help to deal with depression, self-harm, addiction, and other mental illnesses. Project Semicolon, more commonly known as “Project ;”, an American Non-Profit Organization, is one such organization that contributes to education about mental illness, as it aims to provide hope and love to remind most people that there is no shame in asking for help if one is disturbed by the thought of suicide or self-harm.

You can get a semicolon butterfly tattoo inked on yourself if you are someone who has had suicidal thoughts and is looking to portray a new beginning as you have left behind the struggles of mental health. You can also get a semicolon tattoo if you are hoping to raise awareness about tough topics like suicide and depression and such tattoo designs can also be a great way to show support to friends or family members who have had such experiences or have lost hope in God and are not expecting a whole lot from life itself.

Minimalistic tattoo designs are perfect for people who want to ink a tattoo on their body but don’t want it to be too flashy or attention-grabbing without losing the meanings behind the tattoos as you keep the symbolism intact.

Tattoo designs like this are low-key and can be inked in a discreet place to easily hide them. However, a semicolon butterfly tattoo on wrist is one such tattoo that is best when it is visible as it symbolizes freedom and a new beginning in life after going through an immense struggle.

A tattoo design like this might be simple and minimalistic, but it does the job of portraying hope in people and can remind them that the world has much to give.

The world of tattoos is often used to portray various meanings and symbols that people associate with themselves. Semicolon tattoos are one such design that makes the best use of the art form as it raises awareness towards mental health.

Tattoos done with only black ink are popular, but adding colours to such tattoos can take them on a whole new level. This colourful semicolon butterfly tattoo takes on a different approach by making the tattoo design pop by adding the rainbow colour palette to it as it interprets a way to make life more colourful as it ditches the bland black and white design.

The placement of this semicolon tattoo on your body is up to your preference as you can add various elements to the art to add your own meanings to the design or create a symbol that tells your story to the people around you.

This is another watercolour wrist tattoo that can work great as a mental health tattoo because of its simple design that is a symbol of mental health along with its usage of bright colours like blue and purple.

As usual, if you don’t like the placement of this wrist tattoo, you can get it inked on parts of your body.

Tiny or small tattoo designs are a great way to pass on your message without the tattoo idea taking up a huge chunk of your skin. Small tattoos too can tell the story behind tattoos if they are properly placed on the body.

This tiny tattoo takes up a small part of the skin and its placement can be altered the way you want it to be, as it can work on any finger or the wrist.

If you are not sold on the base design on this tattoo, you can ask your tattoo artist to add their own designs or add an encouraging sentence to the tattoo that can be used as a symbol of education towards the awareness of suicide or depression in a person showing signs of losing hope in life.

3D tattoo ideas have gained popularity over the years as tattoo artists all around the world have made efforts to get the best out of the tattoo art form.

This semicolon tattoo idea incorporates the 3D or greatly detailed design as it makes an effort to add a certain amount of depth to bring the butterfly closer to a life-like portrait. The minimal usage of colour in this semicolon design makes it pretty to look at and the neat portrait maintains the aspect so that nothing gets lost in translation.

This tattoo idea is perfect for the wrist, but if you want to change the location, you can do so easily and make it a symbol of your positive approach towards the struggles of mental illness.

Geometric tattoo ideas have gained massive popularity over the years and can serve as a great symbol for whatever meaning that you want your tattoo to portray. These tattoos can be tough to get inked on your body as they require precision and need to be absolutely symmetrical to get the best result possible.

In most cultures and designs, a geometric tattoo symbolizes harmony and stability, but since tattoos are based on the interest of a person, they can be altered as much as possible as seen in this tattoo with the addition of the sentence “the story isn’t over”.

You can use your tattoo to remind yourself of the tough times that you’ve had experience going through depression or when you’ve had thoughts about suicide. Hopefully, this tattoo will provide you with some solace and help you in opening a new chapter in life.

The shoulder has been one of the most popular for both men and women to get inked on as it is often associated with strength and power. As a result of this popularity, shoulder tattoos have become widespread and have spawned countless tattoo ideas that make the best use of the location.

The semicolon butterfly tattoo too can be inked on this popular spot, as this place is commonly visible most of the time. This tattoo idea uses a minimalistic approach as it presents the portrait of the butterfly sideways and gives it a unique look.

This semicolon butterfly tattoo outline can be altered by increasing or decreasing the size to give you your very own rendition of the tattoo.

If you want to show your fearless nature, you can check out Fearless Tattoo!

Colourful tattoo designs are by far and large and are considered to be the most popular form as they bring out the best of tattoo designs by using various colours to bring life to the tattoo.

This design is neat and beautifully crafted and can act as a head-turner when you want to flaunt it. The yellow and green ink is perfectly filled in the portrait as the tattoo is topped off with an equally stunning black border which acts as a frame to hold the colours inside the design.

Tattoo ideas like this can be used in many ways as you can incorporate your own ideas into them in an effort to create a butterfly semicolon tattoo meaning that resonates with you.

This tattoo is cool to look at as it takes the concept of portraying the butterfly in all its nature and incorporates the semicolon discreetly.

If you are not a fan of the all-black ink work, you can add colours to the design or add text to it and make it a symbol that will represent luck or a favourable aspect of life.

Tattoos on the forearm are quite a common appearance these days as this location is clearly visible most of the time. This visibility makes the placement of this tattoo a great sight as it represents the honesty and confidence of the wearer as they have no intention of hiding the tattoo.

The prominence of such a design helps you in taking pride in the art and flaunting it as much as possible. Since the idea here is to raise awareness, visibility of the tattoos is of utmost importance, making this placement a great spot.

The design is simple and gets the message across without providing any source of complication. If you like simple tattoos, then this design will be perfectly suited to you.

Line tattoo designs have become a mainstay in the world of tattoos due to their amazingly intricate design elements. These tattoos are basically made up of lines and are often left unfilled without any colour or shading.

As is the case with such tattoos, they are used to represent minimalism and their potential is unending as they can be used in various ways to bring out the best of the design and the meaning behind the idea that you want to portray.

This tattoo idea is not only stunning to look at, but it is always well-drawn as the minimal shading gives this design a glass-like feel that is aesthetically pleasing.

The basic concept of the tattoo is up to your choice as the semicolon butterfly tattoo meaning is yours to decide!

Find some more inspiration with these Faith tattoo ideas.

Here are some recommendations for similar tattoo ideas: