10 best script tattoo ideas you have to see to believe! 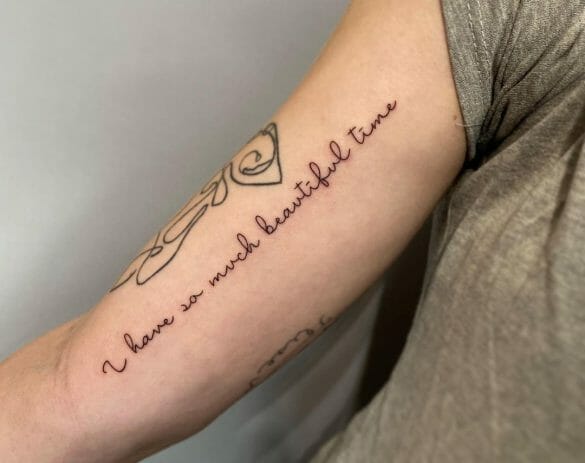 Looking for some majestic script tattoos with a purpose? Here are some of your best options to check out and get inked with one of them already!

Many times, when things do not work out in life, a few words are exactly what is needed.

As per a tattoo artist, the art of lettering words as tattoos has been one of the popular forms to be inscribed on one’s body. And that is primarily because of the different options and styles that emerge from the very idea of script tattoos.

The art form of script tattoos, if thought carefully, is a very direct tattoo. There are no meanings or symbols hidden inside but in the tattoo itself on the skin, in suitable script fonts and tattoo designs. But what is a script tattoo precisely? It is the lettering of slogans or quotes of lyrics or any words or a short phrase in any language that leave a mark in your life and is precious enough to get inked with.

Another reason for the popularity of lettering tattoos is that owing to their vast characteristic and no stringent specifications; it has room for different kinds of words and letters – either one word or lines long. All we need is a talented tattoo artist and the patience to sit through the journey of tattooing.

The process of tattooing and the tattoo, fonts, script usually depends on the personal preference, the style one wishes to adopt for the lettering tattoos and of course, the tattoo artist. For simple and one-word lettering tattoos, it might take half an hour at the very least. But if it includes lining paired with a personalised detail, colours, the time might exceed up to two hours. Medium-sized lettering tattoos can require up to a painstaking five hours, but with succinct and less complicated ideas, it can take lesser time, perhaps two or three hours. And in the case of large, wide script tattoos, the tattoo artist usually takes more than two sessions because it is difficult to sit for a long stretch of duration for the tattoo. Hence it can be fairly concluded that the key to getting inked with a beautiful lettering tattoo is faith in your tattoo artist and immense patience. Of course, you will not regret it a bit, especially if it is one of these.

Every time we come across some marvellous literature piece or movies or sometimes even through conversations, we often pick on some quotes or pieces from them which stay etched in our hearts forever. For lettering tattoos, one of the most popular tattoo form design amongst many is a tattoo with song lyrics. Winsome writing of some soulful lyrics perhaps from the legendary songs of Amy Winehouse or Linkin Park or Leonard Cohen or Madonna, the list is endless and the spectrum, wide, for a tattoo laced with music. These tattoos are best suited on the arm with dark ink yet with a simple tattoo script font.

Having used MS Word almost every day, we are all aware of font style, cursive writing and calligraphy. It is thereby often seen that phrases are often inked on the arm in one or two words using various font style designs like Fearless Script, Inked Script, Mardian Pro, Fette Fraktur, Angilla Tattoo etc., as it is aesthetic in appearance, eye-catching, and arouses one’s interest easily. A great example of such an idea is lettering tattoos with a font style, which are considered to be a classic. In many cases, these words in various fonts represent specific meanings to the customer – sometimes an inspiration, sometimes as a memorial tattoo in remembrance of something close to one’s heart.

Tattooing on fingers? Not the most popular suggestion, but think about it. Someone asks you where your tattoo is, and voila, it is lingering on the fingers with an air of mystery and maybe a tad bit of mischief in it but in cursive. Every time we use our fingers, as we do at all times for our daily chores, one of those cool tattoos in cursive keep meeting your eyes and you are reminded of something that is as precious as a loved one or maybe something as fun as one of those Roman jokes.

Name Script Tattoos on the Waist

The sensuality of having an inscription on your waist is unparalleled. You can triple check with your tattoo artist, but a waist script tattoo is everyone’s secret dream because why not? It is like one of those bold secrets you keep in yourself, protected from the rest of the world, but once anyone gets a peek of it, it is hard to move their eyes away from it. It is advisable to create your own quotes or quotes which define the meaning of your innermost being, to be used as your waist lettering to enhance the fine, arcane and mystic vibe of it. You can add certain geometric designs around the quote.

Script Tattoos In An Image

Going back to our history lessons, remember those handwritten messages we read about in the royal household? Or ink any script or letters in a portrait format with a majestic cursive font style or tattoos in a square image with a simple script or a sign in a painless font but with meaning, the possibilities are more than we can think of. And when the script tattoo is in an image, it is easily noticeable, has a realness to the portrait, and the writing can be written in a better lettering craft. A good example of it is the reference mentioned up there, or one can ask their artist to provide some more references to get more phrases into consideration.

Lettering tattoos but in the eerie, gothic portraits and Mediaeval font style. Sounds fun? Imagine other people asking you to flaunt your tattoo, and you show them the shoulder blades or the tattoo on your chest glaring at them in a horror laden, gothic font style. It will not only leave a bold impression, but a script tattoo like this will also establish your inner goth, and to ink a scary lettering design on your skin indeed proves how fearless you can be. To add a quirk to the style, you can match the blackletter spelling with a Bible quote or phrase. Now that will surely get people around you to talk about your tattoo.

In the hunt for gutsy, intrepid tattooing and lettering? Change the part of the body where the tattoo will be tattoed and shift it to the face. It will be a fine twist to the taste and will glare at everyone. If it is just a word, then one can ask their artist to make the font not cursive but some other font ink lettering like Sailor’s Tattoo Pro or Fette Fraktur or as per the choice and let the word slide down till the neck. It is a confident tattoo with the whiff of the Rock genre and will leave a little mystery if it goes down the neck slowly from being absolutely visible to being under the wraps.

Ink that one-word phrase with a symbol perhaps on the neck or the upper arm and see how automatically you feel like a special person not meant to be just a human. Everyone in the world likes symbols and deep meanings, and that is because we like to unearth things that are not known. Hence when you get a phrase tattoo or just a word with an animal face above it, it leaves something unknown, waiting to be discovered. And it gives a sense of power to yourself too. Tattooing this tattoo might be a little tricky, so, alongside the reference mentioned, another popular example is the Harry Potter house symbols. Or, for a more practical approach, maybe ink an everyday essential and write the most important word that is linked to it.

Here is some punk, street style lettering tattoo idea. As we have all seen graffiti walls and pictures in public view, how about lettering a tattoo with Graffiti art infused in it? As it is a controversial subject and often used by the urban youth to voice opinions during times of conflict and unrest, the tattoo can be for a revolutionary or political reason too. One can also opt for a stencil graffiti design for more elaborative and sophisticated imagery with some scripting on it or phrases that provide meaning to it. A large, elaborate graffiti picture or a punk phrase perhaps on your chest or back with a funky colour scheme to it is just the right script tattoo for the people to stare at it more than once and even feel awed at the flamboyancy of it.

Knee tattoos or above knee script tattoo is a painful business, yes, but then why are they still in demand? Because they look absolutely gorgeous when completed and gives a sense of raw adventure and bravery to them. Some people get both their knees tattoed, too, because of all the rush, lettering a knee script tattoo can give. It also gives wholeness to the phrase or lettering. To portray an illusion of the moment, a lettering tattoo with a graphic font to it makes it seem like it stands out and above the knees and somewhat even looks too real not to be deemed unreal. Overall, it looks edgy, funky and makes you want to put on your shorts all year round.

Getting a script tattoo means getting inscribed with something on your body that will come into view every day or even every waking hour. Therefore it can play a massive role in regulating one’s mood and psychology daily. Hence it is advised that you choose the quote or phrase or sentence to be tattoed, very wisely and with the acceptance that you have to come across it every now and then. In many cases, a tattoo in script format has pushed people to grow further in their time of survival, to develop a better state of mental health and to carry a remembrance of something or someone loved too. Be it a casual script or an inspirational quote; a lettering tattoo has a great impact on not just the person getting the tattoo but also on the person who sees it often.

For more, here are some reference designs of Script tattoos in case one finds their inspiration from these: