10 Best Scarab Tattoo Ideas You Have To See To Believe! 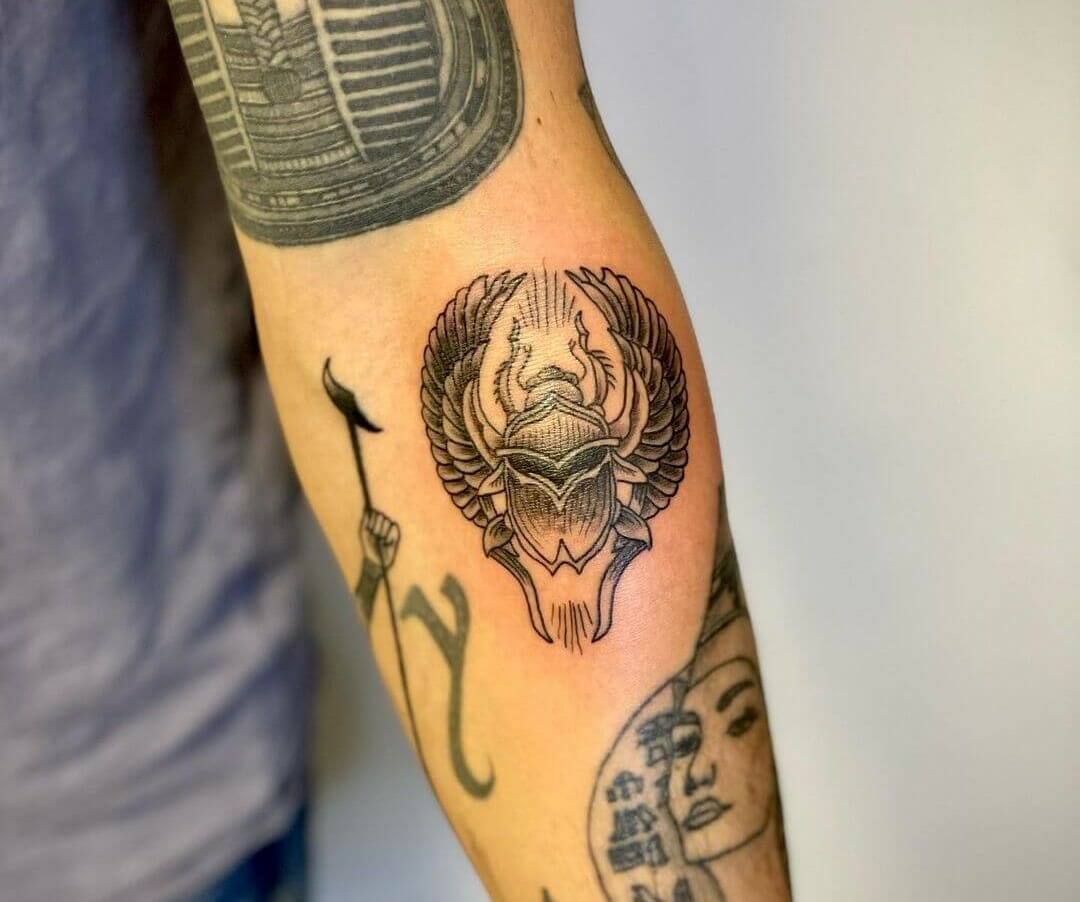 If you have been looking for some elite tattoos that have a history attached to it, you are right where you are meant to be.

Scarab tattoos have earned millions of hearts with its aesthetics and deep meanings.

At one glance, one might wonder, who even tattoos an insect on their body? Well, we would say, give this tiny beetle a chance to prove you wrong.

What Does A Scarab Tattoo Mean?

A popular Egyptian symbol, the scarab beetle has been a popular inspiration for artists since ancient Egypt. But what is a scarab? It is nothing but a dung beetle Scarabaeus Sacer. A scarab would roll dung in the Earth and deposit them to be used as an egg incubator in their mound and when a baby beetle was born out of the mound unexpectedly, it would be a reminder of how civilisations have always been sudden and unexplainable. However, it was not until the Egyptian sun god, Khepri, was depicted as a man with a beetle head when the scarab would be seen as sacred. According to ancient Egyptians, Khepri rolls the sun across the sky every day just like a dung beetle would roll dung. As the sun symbolises life and energy, the relationship between Khepri and the scarab was soon associated with the sun god and signifies rebirth and the cycle of life. The scarab, due to its sacredness, was also used as amulets and impression seals as well as accessories by ancient Egyptians and were believed to act as a guide for every soul through the afterlife. When a person dies in ancient Egypt, it was necessary for a soul to pass through Ammit’s hands when it finally reached the Hall of Judgement; only if it weighed less than a feather of Ma’at, it would not be allowed to pass through. The heart scarabs were used as a substitute for the heart, in case it was not light enough. Furthermore, the scarab protected the dead by holding the answers to questions posed by the underworld gods. Consequently, we can conclude that the scarab symbol has an important significance from the very beginning of life until death which makes a scarab tattoo very meaningful and versatile according to the tattoo bearer and viewers perception.

The story and historical association of these beetles has inspired many artists and tattoo enthusiasts to ink the little insect on their body as a mythological godly figure. There is a great deal of history and symbolism entailed in these scarab tattoos. In addition to traditional Egyptian depictions, scarab tattoos may also take on contemporary and stylized forms which makes the scarab tattoo incredibly versatile. In case you are wondering if this tattoo might not look as modern because of them being a symbol from the past, we promise if you take a look at them you will know that these tattoos do not just have a historical relationship with ancient Egypt but also look very cool and involve intricate designs that will never go out of style. So, now that we are ready and prepped up with all the necessary understanding of the history of this gorgeous beetle, let us take a look at these beautiful scarab tattoo inspirations that will have you mesmerised with their magnificence.

The scarab beetle is so beautiful that even if you decide to leave them colourless and simply use black ink, you still will not go wrong and the tattoo will look just as pretty. All that a scarab demands is pure dedication from the artist and all you as the bearer have to do is worship this symbol just like the Egyptians did. You can place this tattoo anywhere of your choice on yourself and you will for sure rock it regardless. However, if you choose to colour it with just black ink, choose a stark black colour to make it stand out.

One can never go wrong with a minimal tattoo. If you are fascinated by the mythology and symbolism of the scarab and really want to tattoo it on yourself whilst not wanting to commit a lifetime to a tattoo with too many details, this tattoo design is sent by the sun god just for you. Simple black outlines with beige sun and wing details, this tattoo, defines artistic minimalism. So, what are you even waiting for when you should be booking an appointment at the tattoo parlour right now?

Confused between the various scarab design ideas? Go original! Ink the realistic metallic skin of a dung beetle and you are ready to take on a journey blessed by the sun god. Let your creative juices flow and add a few wing details like the Egyptian scarab and you have yourself an original Egyptian scarab tattoo that no one would be able to keep their eyes off. You can tattoo this on your forearm like the bearer in the picture or anywhere of your choice and go rule your life with the symbol of life and rebirth on yourself.

A traditional tattoo, especially when it comes to Egyptian tattoos, will never let you down. This Anubis along with a blue scarab tattoo is one of our favorite scarab tattoos and we can get over how vibrant and perfect the tattoo is. Anubis, as an embalmer, accompanied dead kings into the afterlife and presided over the embalming process. During the life-judgment of kings by Osiris, Anubis placed their hearts on one side of a scale and Ma’at on the other. The results recorded thereafter by Thoth will determine whether or not the king will be allowed into the Egyptian afterworld. Show off your Egyptian mythical knowledge with this traditional tattoo featuring Anubis and the scarab beetle.

The Egyptian goddess of the home, domesticity, cats, fertility, and childbirth combined with an Egyptian scarab beetle tattoo design in the most artistic way possible. Now can this tattoo be any better? We bet not. The artist has outdone himself with his incredible line-work for the creation of this tattoo. Bastet would protect homes against evil spirits and diseases, especially women and children. Bastet, apart from being the Goddess of birth and fertility, too played a role in the afterlife guiding the souls in the afterworld. This relation of their roles in afterlife makes this tattoo a great option to ink but if the antiquity does not convince you to ink the tattoo, we bet the impeccable design will.

Scarab tattoos provide ample space for creativity and colour coordination. You can go wild with your choices of colours and flaunt your tattoo in the most artistic way possible. This tattoo with its vibrant colours is one of the best inspirations you are going to find when it comes to a scarab tattoo. If you have been looking for a coloured tattoo that features Egyptian history but also do not want to make it boring, this is a sign from the Egyptian gods that your soul has been allowed to imprint this coloured scarab tattoo with its beautiful green colours and realistic metallic effect which is coming from the tiny white detail. You see, every tiny detail matters when it comes to creating art and this artist has proved it by this tattoo design.

A tattoo on the back generally represents the foundation of life, and it is usually very personal, as it is only visible by others in certain situations. If scarab symbolism is something very personal to you, these back scarab tattoos are meant for you. Nevertheless, a back tattoo is also a great idea because of the space it provides. You can go as wild as humanly possible and a back tattoo will still not let you down and will always turn out to be a stunning art piece. The artist who created this tattoo has used a bold black ink that follows every tiny and intricate detail of the scarab beetle and we can not get over the precision. However, if you are interested in a more colourful and vibrant ink, back scarab tattoos also will never disappoint you.

Tattoos on the chest symbolise strength and power, and where a scarab appears as an ink art is the most masculine of all and a scarab motif will never be a wrong decision because of its godly associations. It symbolises that the bearer is brave and takes challenges head-on. The artist of this tattoo has displayed immense skills by creating and projecting a new creative concept of his own. The intricate details and incorporation of a skull at the back of the scarab has us swooning over the design. If you have been looking for a chest tattoo that features Egyptian details, this is it for you. If you wish, you can also incorporate a few colours into it and go rule your life as the brave bearer would.

Hieroglyphs (literally meaning ‘scared carvings’) are inscriptions used by Egyptians that were carved or painted on temple walls. These were some of the earliest used writing forms and are an important part of the Egyptian civilisation. Get the Egyptian symbol associated with their mythology with a touch of Egyptian history with a tattoo like this. This tattoo features a scarab on a hieroglyphs background inked with striking black ink. Ask your tattoo artist for a tattoo like this the next time you are at the studio and show off your Egyptian knowledge.

If you have watched The Mummy (1999) movie and absolutely love it and are super into Egyptian history, this tattoo is exactly what you are missing out on life. This tattoo is inspired from the sacrificial dagger as featured on the movie along with a scarab motif on it. If you are not a fan of simple black tattoos and in search for a coloured tattoo, you can also let your creativity unwind and ask the tattoo artist to colour it for you.

We are sure by now that you have one of your favorites among these gorgeous scarab tattoos and are ready to go out in the streets and make them all turn their heads while you walk past them. However, since these tattoos involve a lot of intricate detailing, we would highly recommend you find yourself a tattoo artist who is experienced in such designs and has a good track record. Once you decide on the design, talk it through with your artist and convey all the details and ways that you want your ink to be like and let the Egyptian sun god bless you and your body art with prosperity.

10 Best Seal Tattoo Ideas You Have To...

10 Best Prince Tattoo Ideas You Have To...

10 Best Planet Tattoo Ideas You Have To...

10 Best Undertale Tattoo Ideas You Have To...

10 Best Umbrella Tattoo Ideas You Have To...