10 Best Sasuke Tattoo Ideas You Have To See To Believe! 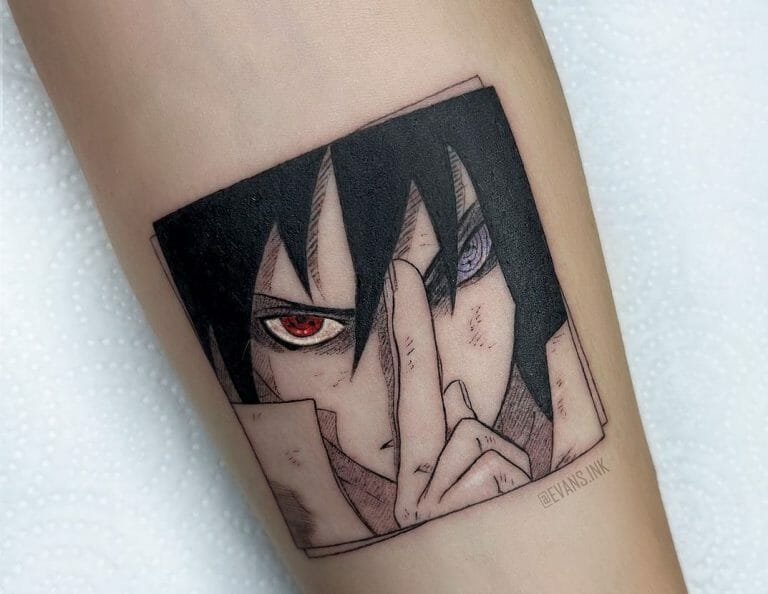 There’s no need to leave Konoha in search of a good Sasuke Tattoo for we have the best ‘Naruto’ tattoo compilation of Sasuke here!

If the first person who comes to your mind when you hear, tall, dark, and brooding is Sasuke Uchiha from the Naruto series then welcome to the club of fans who have secretly dated him in your mind.

Fans have gone head over heels for Sasuke and have even gone far enough to have his face forever inked into their skin which brings us to the entire topic of some of the greatest Sasuke tattoo ideas as the best Naruto tattoos that fans have gone for.

Amongst a plethora of ideas to choose from, most fans have gone for the curse mark Sasuke tattoo which is the trademark of Sasuke’s character. The classic Sasuke moon tattoo which is a half-moon on the palm and the Sharingan tattoo is also a familiar tattoo amongst fans. As one of the main characters in one of the most successful and longest-running anime and manga series, a classic Sasuke tattoo on your arms serves as a great idea that can be a nice reminder of a childhood well spent. Elaborate Naruto tattoos like Naruto’s one-tailed form along with Sasuke during the Chunin exams can also act as good covers for previous tattoo choices which were nothing but regretful.

Additionally, if your entire family is a Naruto fan, you can get the symbol of the Uchiha clan which is a red and white fan tattooed on your backs or minimalist ones on your necks.

If you are looking for some of the best Naruto tattoos of Sasuke to boost your chakra levels for jutsu to wow your peers, you can check out this awesome article in which we have curated the best list of Naruto tattoos to meet your tattoo needs.

If you’re looking for a Naruto tattoo that will jerk the tears out of you even if your emotional level is akin to that of Sai’s, this is the one you should go for. This classic scene from the manga and the anime was one hell of a plot twist not only for Sasuke but also for the loyal fans of this series as well. This episode has not only shown Itachi’s abilities and skill as a prodigy in the ninja world as well as his subtle genius that enables him to purge the curse of heaven from Sasuke’s body which would erode his mind just as Orochimaru intended in the first place. Akin to the manga panels drawn by Masashi Kishimoto, this black and white tattoo on you will surely speak volumes about loyalty, courage, bravery, and unconditional love being your ninja way.

If Naruto is considered as the sunshine of the ninja world with his boisterously loud, obnoxiously goofy, and bright blinding orange-colored personality, then Sasuke would be the night; dark, brooding, calm, and cool, bringing balance to the world. Sasuke and Naruto’s bond transcends that of a familial one and this iconic tattoo of Sasuke’s Keke Genkai, Sharingan, and Naruto’s Sage mode eyes from the anime scream brotherhood and loyalty. Naruto and Sasuke’s relationship is the symbol of strength and courage and if by heart, you are a ninja from the Village hidden within the leaves, this tattoo is a must-have.

This black and white tattoo is another example of an exemplary Naruto-themed tattoo designed from Itachi’s death scene. Designed within triangular boxes instead of the classic square or rectangular manga panels, this scene captures the horror-stricken face of Sasuke during the scene when an incapacitated Itachi pretends to take Sasuke’s Sharingan eyes. It is the last moment before the actual motive behind the Uchiha clan massacre in Itachi’s hands is revealed to Sasuke and paves another reason behind revenge for Sasuke. If you, like most other fans, find this scene unforgettable, then this artsy yet heart-wrenching tattoo is worth getting inked on your skin.

Madara Uchiha is one of the most memorable power-hungry villains in the ninjaverse of the Naruto series. Both Madara and Sasuke are the reincarnations of Indra Otsusuki and possess great power with Sasuke proving to be the strongest by defeating Madara in the Fourth Great Ninja War. This astounding tattoo is fitting for your skin and will make any person stare at it in wonder with how detailed it is.

Sasuke’s cursed seal is considered to be one of the most common tattoos that fans have gotten on their bodies because not only does it look cool, but is a great element for cosplay as well. Sasuke’s curse mark on the left side of his neck was given to him by Orochimaru during the Chunin exams because he had intended to take over his body. It can be a deadly cursed seal if it is ever placed on a user’s body and bears the resemblance to a three tomoe or three identical marks with a circular pattern surrounding it on the left side of his shoulder close to his neck. Once it is activated, black marks extend towards his face and hand and are the sign of the user losing himself to the cursed seal. To look like a cool real-life Sasuke, you can get a tattoo similar to the appearance of the effects that it has on Sasuke or anybody with this cursed seal.

Other than most of the fights in Naruto, the iconic battle between Naruto and Sasuke is one of the most anticipated ones in the fifth season of the series. From being members of team members to enemies and then finally back to being brothers, this fight between them has been a cult favorite of all Naruto fans. Getting this detailed and artsy tattoo of their fighting posture and their special powers is a great way to scream out to the world that you are a member of team 7 and everyone should just “Believe it!”

Partial colored tattoos are the best tattoos for highlighting a particular element in a tattoo. This is not just a tattoo of Sasuke, but also that of the most important and powerful characters in the series. However, you can just get Sasuke tattooed in this style if you want.

You can never go wrong with a Mangekyo Sharingan tattoo if you’re a fan of the Uchihas as well as the Keke Genkai. It is the most advanced Sharingans amongst the Uchihas and one has to pay a hefty price to acquire it. However, with it comes great power as well. If you want a cult classic tattoo related to Naruto and most importantly Sasuke, who also happens to acquire the Mangeko after Itachi’s death, this tattoo is perfect for you.

Susanoo is a high-level jutsu that wielders of the Mangekyo Sharingan can perform and is the last major jutsu that we see Itachi using in his last battle with Sasuke in Naruto. This tattoo shows Sasuke’s Shippuden form and the form that his Susanoo takes. It can be a classic addition if you are planning to get a Naruto-themed sleeve tattoo.

Sasuke’s revenge on Itachi is one of the major plotlines of the story of Naruto and this tattoo is of the scene when Itachi gets killed in Sasuke’s hands. This manga panel from the death scene of Itachi where he confesses his undying love for his brother and pokes his forehead like he lovingly did when they were kids is bound to bring any fan to tears.

In quite a few conservative families, tattoos are looked down upon. However, if your family loves Naruto, go ahead and bring pride to your family name by getting a nice tattoo of Sasuke which can also act as a trump card to enter many closed Anime nerd groups online.