10 Best Saint Michael Tattoo Ideas You Have To See To Believe! 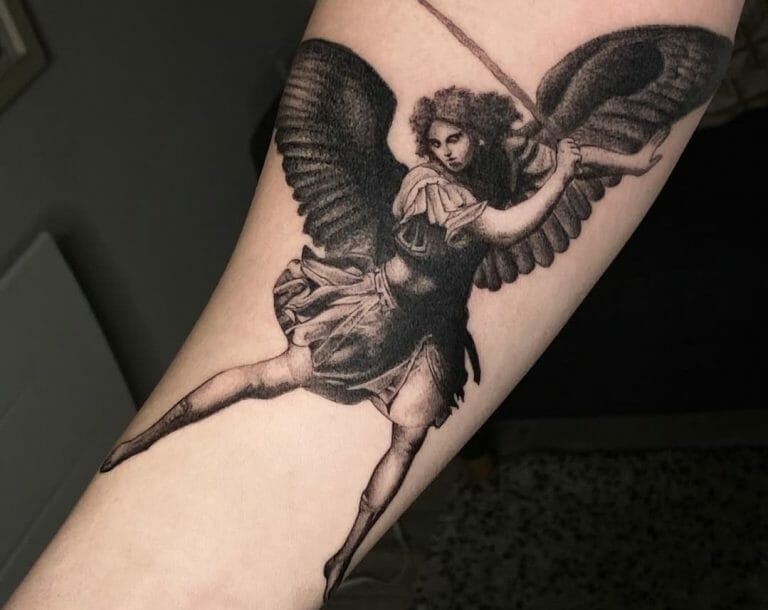 Have you recently interacted with your spiritual self? This specially curated list of Saint Michael tattoos is a sign to get that tattoo appointment!

Archangel Saint Michael is the ultimate protector and finds mention in all the Abrahamic religious scriptures in their present forms!

According to Christian religious scriptures, Lucifer, the seraphim who belonged to the highest rank amongst all angels rose up in rebellion against God. The angel Michael who was an archangel belonging to a lesser powerful rank of angels was sent by God to challenge Lucifer. The historic falling of the angel Lucifer and his subsequent transformation into satan was due to the courage and righteousness displayed by the valiant Saint Michael!

Following this archangel, Michael climbed the celestial hierarchy and became the divine symbol for protection, courage and leader of the other angels. Some Christian religious scriptures indicate that Lord Jesus was an embodiment of the archangel and his glory on earth!

Saint Michael tattoos are popular amongst men who are looking for elaborate tattoo ideas that depict an entire scene. Most of the archangel Michael tattoos are therefore images from religious art found in places like the Vatican and can only be recreated by a tattoo artist who has mastered the art of realism and the ability to reproduce elaborate scenes that are actually art pieces in themselves!

Sone religious scriptures also refer to st Michael as the mighty angel who is the angel of death. He carries the souls of the virtuous to their heavenly abode in their final journey. Therefore a lot of the saint Michael tattoo inspirations come from images of the archangel holding a person under his mighty wings and carrying them to heaven!

An archangel tattoo is also symbolic of final judgment amongst the Abrahamic religions. It is perfect for people from different religions with different moral values. Therefore you will always find images of archangel tattoos in which he is pictured carrying the scales of justice to evaluate a person’s good deeds against their evil deeds. The archangel ultimately decides if they will have a place in heaven with the angels or will perish in hellfire. This is another possible interpretation of Saint Michael tattoo meaning.

Archangel Michael tattoos are symbolic of divine righteousness and protection from evil. it also signifies the victory of good over evil. Therefore, a Saint Michael tattoo design is the perfect choice for men who are looking for a tattoo to portray their religious side.

There are two things you must keep in mind before you decide to get inked with an archangel tattoo. The first one is to make note of the fact that these tattoos will always be elaborate and will take up significant space. So think chest, back or sleeves and centrepiece! The second and most important thing is to ensure that your tattoo artist knows what they are doing and has extensive knowledge on the techniques that achieve the perfect look on this type of angel tattoo!

This majestic St Michael back tattoo is a depiction of this great angel as the true guardian angel! This is a very thought-provoking tattoo owing to the pensive expression on the archangel’s face. The striking rays of the sun in the background form a kind of a halo around St Michael the archangel and adds a divine touch to this ethereal Michael the archangel tattoo. The long flowing hair of the archangel adds a dramatic effect to this piece. The shading is intense in parts and soft in other places. The clouds gathering around the central figure reveal the celestial identity of the angel. The long sword is drawn towards the sky as a symbol of the victory of good over evil.

This type of tattoo is perfect to get as a sleeve because of its elaborate nature. All the many details that are a must for the archangel Michael tattoo can be covered prudently in the sleeve that runs all along the arm. The archangel is shown as a roman warrior in this particular tattoo drawing his sword high in preparation for slaying satan as mentioned in the Bible. This Biblical scene is the most common amongst archangel tattoos. The sleeve provides enough space for the tattoo design to be created by experienced tattoo artists. The face of a fallen Lucifer or satan is quite dramatic although with fewer details in its body as compared to the prince amongst the angels!

This tattoo is another piece of art with blackwork styles all over. The archangel Michael is depicted as a warrior stepping on the head of a defeated satan and drawing his sword to inflict that final blow. This upper arm tattooed area is not as big as the other images of St. Michael but the artist has still managed to squeeze in the entire biblical scene making full use of the limited space. Notice the genius behind using different styles of shading to depict the wings of the archangel in a glorious manner and adding a sinister effect to the wings of the devil!

This is one of the popular styles of archangel Michael tattoos that shows the archangel emerging victorious after satan’s defeat. The wings of the angel are the focus of this tattoo spread majestically on the region right below the neck. This courageous angel who is constantly fighting evil spirits in order to protect us has a deeper meaning. It symbolises not just the archangel’s victory over the devil but is also symbolic of the warrior inside every one of us who is constantly fighting their own demons.

This is one of those large tattoos that take up the entirety of your back. The tattoo has black ink work but gets a dark shade of purple on the cloak area. The black ink will look even more intense and prominent once the healing process of the tattoo is over. This tattoo is different from the other scenes depicting the archangel’s iconic defeat of the evil forces in subtle ways. The scales of justice held by the archangel is an added element of this tattoo and so is the divine eye that is omnipresent and sees all!

If you share a special bond with the lord and saviour Jesus Christ you would know that some schools of Christianity believe that Jesus Christ was an embodiment of the archangel himself. This archangel tattoo is the perfect choice for you to honour your love for Jesus Christ. While the rest of the tattoo depicts a typical Biblical scene with St Michael standing in all his glory, sword raised, what sets this apart from many tattoos is the addition of the face of Jesus Christ. The artist has done a wonderful job of making the two distinct images blend into one. St Michael the archangel has a divine look in his eyes that are gleaming while Jesus’s eyes are closed as though in deep meditation.

Mary and St. Michael stand for ten same core beliefs of social justice, courage and protection. This saint Michael tattoo again combines the biblical scene of the saint fighting satan and a glorious image of mother Mary on top. The scene represents exactly what the Bible says about the great archangel. since some schools of Christianity preach that Jesus was himself the archangel, this St Michael tattoo shows the leader of all the angels, St Michael being watched over by the Virgin Mary. This is one of the rare tattoo designs that combine these two elements of Christianity and is a great pick for those who are looking for tattoo ideas to honour their religious beliefs in style!

This roman art inspired saint Michael tattoo is exceptionally neat. It isn’t as elaborate as the more traditional archangel tattoos shown in the previous article but is an artistic piece nevertheless. St Michael is depicted as a roman warrior stepping on the body of a fallen Lucifer. The heavy background accompanying most saint Michael tattoos is missing from this tattoo but the bold outlines of the angel and the artist’s experiment with the internal sketching of the tattoo are praiseworthy indeed! The halo around the angel’s head is symbolic of divinity and inner strength!

This dramatic back tattoo is a movie scene in itself! This is one of the new tattoos wherein the depiction of this biblical scene comes with a few twists here and there. Instead of tattooing the devil’s entire body, the archangel is shown to be demolishing the evil eye with his gallantry. The wings of the archangel are majestic but represented by leaf patterns which give this brilliant tattoo idea a modern twist! This new tattoo is meant to be created as a back tattoo for the simple reason that it will take up all the space on your body and ink at the tattoo studio to be properly reproduced!

You can also go for a chest St Michael tattoo. This powerful chest tattoo is sure to leave everyone spellbound. The placement of this tattoo is everything! The intensely shaded wings spread out across the chest dramatically. The archangel in this tattoo has a very different look from the other images seen so far. Raising his sword high up in the sky, this tattoo seeks to represent the archangel’s rage and fury at Lucifer for disobeying god’s orders. This tattoo appears to be a battle cry in itself!

This St Michael tattoo is simply unconventional! The saintly face of the archangel is replaced by the blazing red sun that makes for good colour contrast in this usually black and grey tattoo design. The sun is a celestial object shown as the archangel’s face to depict his power over anything that is evil. The gold tone of the warrior’s belt and arm pads give off princely royal vibes in keeping with the overall noble theme of this tattoo. The orange detailing on the gladiators worn by the archangel in this uncommon tattoo also adds a nice colour pop to the tattoo design.

If you are still looking for the perfect saint Michael tattoo to get inked, check out the following list more tattoo inspirations!