10 Best Sailboat Tattoo Ideas You Have To See To Believe! 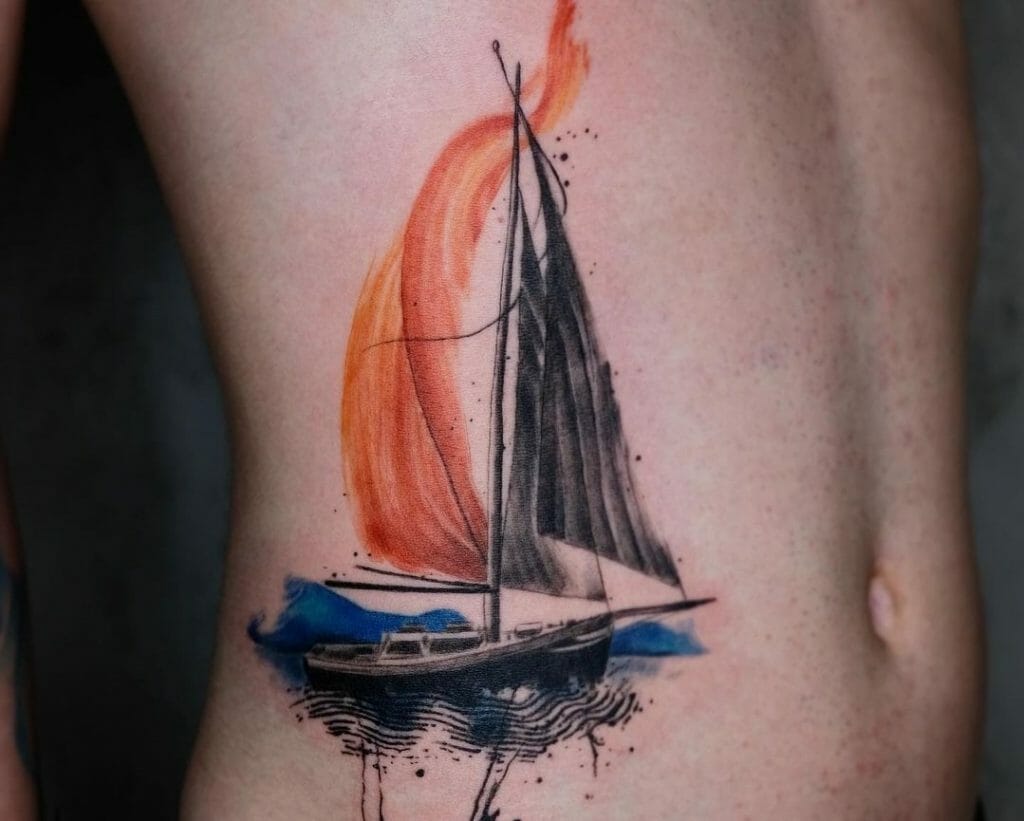 Life is never about reaching the destination. It’s all about the journey – an endless, adventurous journey. Sail through it with some spectacular sailboat tattoo designs.

Tattoos are often a physical representation of the wearer’s spiritual journey, and so, a sailboat tattoo can symbolise one’s exploration of life through adventures and new beginnings.

When you’re going to start a new chapter of life – embark on a new journey, nothing can be more motivational than a sailboat tattoo – something that will encourage you to keep moving forward, no matter how bad the wind gets or the sea-storms come to engulf you. Because a new beginning always awaits after the storm passes.

The ship has been a symbol of travel and exploration since long before the first trips to unknown lands were attempted by Columbus, Magellan, and others. From the first boats to sail the Nile River to the Viking ships that circled the globe, from Columbus to Cook, it’s been a universal symbol. Sailboat tattoos are tied closely to this history.

When we think of sailboats, the first thing to pop up in our minds is air. It can be compared with the ‘flow’ of life. And since a sailboat is primarily carried by the wind. So, it can be metaphorical of ‘the journey of life going with the flow’. Sailing is symbolic of a spiritual voyage, and the sea storms symbolise the challenges that come without prior warning. But do you just give up when the course is full of jolts and jerks? No. You keep sailing – you keep holding on till your last bit of strength. A sailboat embodies life on the ocean, the spirit of adventure, freedom of movement, an immense desire to wander, and a constant reminder of one’s purpose in life.

Hopefully, this snippet consisting of some startling boat tattoo designs help you get started on your journey.

Want to highlight your blooming, unquenchable desire for maritime traveling and adventure? This sailboat tattoo with a full-bloomed rose at the end is replete with symbolism. Your love for voyages out on the distant seas can be perfectly manifested in this one. This sailing ship inked in black on the prancing waves symbolises a boat that is already in the middle of the sea – it’s on its way to some adventure. Although the chances of a storm creating an obstacle and causing some damage are always there, the braveheart wearing this boat tattoo is intensely determined to walk on the road that leads to new adventures and wanders. The rose here is symbolic of the adventure of life in its full bloom.

Sailboats indicate a search for undiscovered land – a desire to explore the mysteries of life.

The list of ship tattoo designs is sort of incomplete without a minimalist sailboat tattoo. A sailboat afloat on the waves, with the curves of the waves making a full circle around the anklet, is a beautiful ship tattoo design for the admirers of minimalist art and for people who love to go on explorations. It’s subtly ornamental, without being too flashy or congested. The linework is finely done. It can also be tattooed on the wrist.

Sailboat tattoos often tell a story of an escape to a distant and isolated place or a return home after a long and arduous journey. The Greek epic hero Odysseus, also known as Ulysses in Latin set sail for his home in Ithaca after the Trojan War was over. But he had to face dangerous hindrances one after another, and it took him ten long years to finally reach his home. A sailboat tattoo representing the journey of Ulysses has quite a crucial symbolism in it. The dark crescent moon bears a bad omen. It represents the threat of all the dark supernatural beings that hinder Ulysses’s journey. It tells you that no matter whatever obstacle you encounter, you may never give up trying to reach your goal. Ulysses did not give in to all the threats he had to face during his voyages. Instead, he undertook each of his battle as an experience and learned some valuable lessons from it. So, even if life is giving you a hard time, you must always remember that life is trying to give an important message to you, and you must go on!

This traditional boat tattoo symbolises the undaunted spirit of the sailors – their courage, independence, and their challenging attitude towards life. Ships and the sea often represent the hidden and mysterious depths within our consciousness. The ocean captivates even hardened urban individuals, drawing them in with its hypnotic rhythms and vastness. Sailboat Tattoos will help you appreciate the excitement, fear, and romance of the sea, but they may also remind you of the darker side of the ocean.

Colourful Sailboat Tattoo At The Backdrop Of A Sunset

Drift away with the current and let the breeze embrace you as you drown yourself into the oblivion of mesmerizing beauty with this soothing sailboat tattoo with a crimson sunset in the background. This is exactly the kind of sunset you would want to witness and experience when you’re out vacationing in the open water to disentangle yourself from the banality of life. Filled with a strange serenity, you will allow the wind to run through your hair and the sun to bask your skin in its golden lustre. This sailboat tattoo is perfect for you if you prefer to look up to the calmer and soothing side of the sea.

While the lighthouse stands for several different things, its most common symbolism is guidance and strength. For years, sailors have relied on lighthouses to find their way around in the dark. A lighthouse has an intrinsic relationship with the ocean. Coupled with a lighthouse, a sailboat tattoo can pose as a unique symbol that indicates the voyager’s journey through life towards a destination. The lighthouse is the destination – it stands for individuality. It is that ideal state of life man wants to attain. It represents something you want to become.

This one has quite a unique design to it. An anchor is a symbol of stability, determination, and passion. If you’ve set your goals in life, if you’re passionate about them and if you’re determined to reach those goals, then this anchor and ship tattoo would be an emblem of encouragement for you.

This aesthetically pleasing sailboat tattoo may seem serene and blissful, and it may represent the calmer version of nature – but also underlies the looming threat of a sudden storm that can destroy everything at any moment. So, this tattoo is not just there to remind you of the positive adventures of life but also to prepare you for future battles. So that, when something bad happens, you don’t lose your spirit in it but have the strength to fight it.

This boat tattoo means more than an ordinary sailboat. The fragile paper boat embodies life. A paper boat will not float forever – it will sink eventually. Similarly, life is also fragile, and it can end at any moment. A paper boat can also symbolise childhood dreams that are harder to achieve but still possible. Some get lost, but the ones that are lucky enough get to sail to their destination.

Palm trees are symbolic of peace, victory, triumph, and eternal life; paired with a sailboat – the entire tattoo could mean that the voyager has reached his destination through a triumphant journey. It can also indicate that the wearer is at a phase in his life, where there is peace.

The sea is the sailor’s final destination. It is both a seductive siren and a destructive force. Sailors have long been transfixed by this dual nature of the sea. From the beginning of time, our ancestors looked to the oceans and created art that depicted sailing ships. Whether on cave walls or canvas, these savants of the past did not just fabricate ordinary crafts; they rendered celestial visions, visions of adventure, and heroism. Today, that spirit of exploration still courses through our collective veins. Sailboat Tattoos is here to serve as your guide to colourful destinations both near and far, inviting you to dream about distant horizons while still keeping you grounded in the present.

These intricately designed nautical tattoos -rich with centuries-old iconography are inspired by the elements of the ship and sea. These tattoos are a way to capture one’s connection to these timeless themes. Apart from these designs, there are plenty of other boat tattoos for you to discover: