10 Best Sacred Geometry Tattoo Ideas You Have To See To Believe! 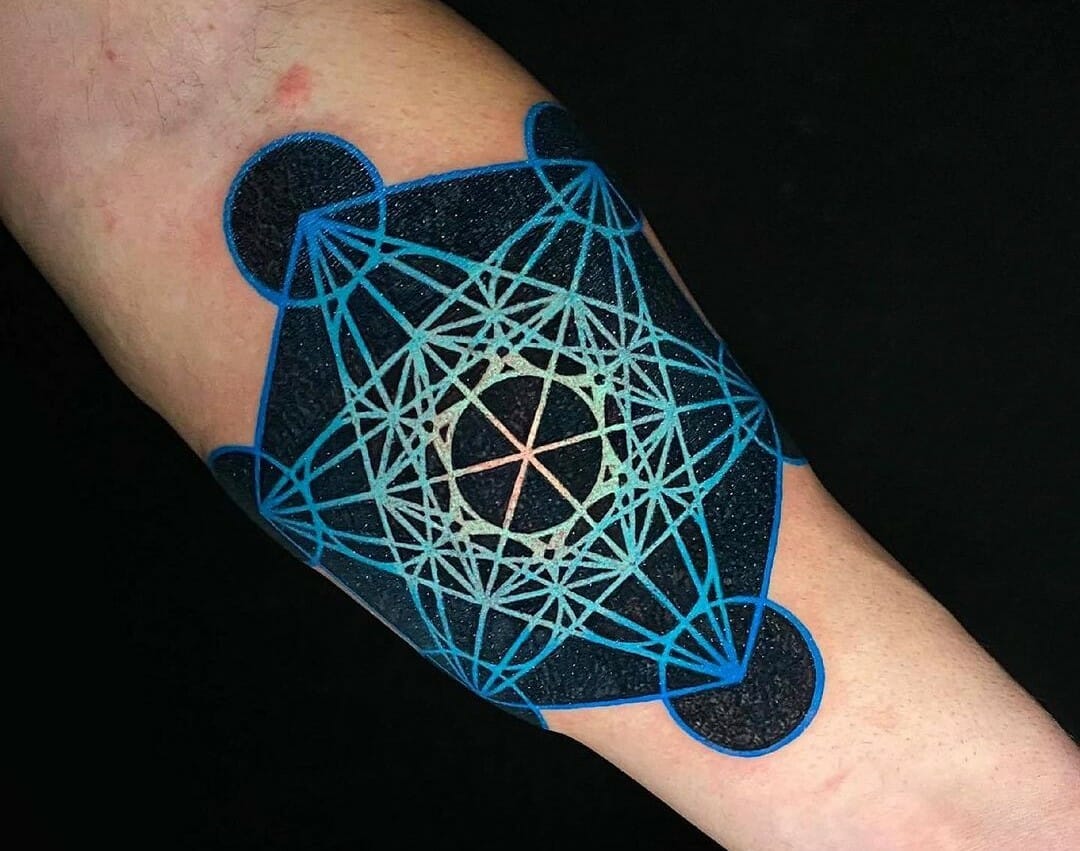 If shapes and patterns combined with religious or spiritual symbols are your things, then immerse yourself in the divinity of sacred geometry tattoo designs.

Sacred geometry attribute sacred and emblematic significance to certain geometrical configurations and God is believed to be the geometer of this world.

The language of symbols is found all over the world, where each symbol represents something different but connects us to our deepest selves. They are deeply rooted in our identity and our beliefs.

Sacred geometry is a means by which the underlying foundations of life may be understood. It is based on the idea that everything in nature is created from basic shapes or patterns. The combination of these patterns forms an underlying mathematical system that is considered to be intrinsic to the human psyche. It is archetypically transmitted through time by variation in culture in all human endeavours, including art, architecture, music, and spirituality. It flows through nature, the human body, the human mind, and even supernatural phenomena like ghosts and spirits. Sacred geometry can be found throughout the Torah (the first five books of the Old Testament), the Bible, the Quran, ancient mythology, native cultures around the world, the art of various civilizations, religious symbolism, graphic design, architecture, fine art, music theory, universal symbols across cultures – everywhere you look. These symbols are thought to carry deep meaning. Representing some of life’s greatest mysteries, their origin can be found in virtually all cultures. By connecting with the symbolism inherent in these symbols through tattoo placement and design, one can grasp a greater sense of self and one’s relationship with the world around them.

Geometric tattoos are often symmetrical and contain shapes such as triangles, squares, and hexagons. Common tattoo designs include grids of squares and circles, as well as shapes such as wings and bows to evoke ancient Egyptian art. Sacred geometry is also linked to the ancient practice of cosmography – the name given to the study of the Earth’s surface – and sacred spaces.

Sacred geometry tattoos may be one of the most creative and artistic styles for tattoo enthusiasts. It is the connection between the natural and unnatural worlds, summoning positive energy and creating beauty through design. These tattoos are intricate, ornate, and visually stunning. There are many representations of sacred geometry tattoos. These geometric tattoos can be used to represent many things depending on the sacred geometry symbols. A triangle could be used to represent one thing, while a square can represent another, and vice versa. They’re meant to represent different things, but they all work in harmony to create one-of-a-kind body art.

Open up to the intricacies of sacred geometry with these unique tattoos inspired by nature.

This hand-picked art deco geometric tattoo embodies the style and aesthetic of the 1920s and ’30s while staying true to the geometric nature of sacred geometry. The upside-down church adds a dark gothic vibe to it. It’s a pretty unique design for a head tattoo.

When you cannot decide which particular geometric shape to choose for your body art, you should incorporate multiple shapes and symbols together to give your tattoo a compact look. Sacred geometry tattoos are all about the details, and tattoo sleeves allow you to put smith together several pieces into one single cohesive design. The overall tattoo will tell a story, while the components of it will hint at symbols or characters that make up that story.

Dotwork tattoos were generated from the post-impressionist pointillism movement. Tattoo artists use multiple dots to create symbols, patterns, or visual effects for this kind of tattoo. This method helps to create illusory depths and shadows in a tattoo.

The Nautilus shell tattoo has come to symbolise many things including, nature’s order and grace and the idea of growth and expansion. From ancient times, the nautilus was seen as a symbol of transformation, with each previous chamber representing its past. The nautilus is seen as a symbol of resurgence and renewal. The spiral also symbolises organization in chaos, which reflects the nautilus’s mode of growth — it creates new chambers in direct proportion to its size and then branches off with geometric precision. This infinite aspect of nature offers us a reminder that with self-awareness and acceptance we can grow into our full potential.

Inked in the Dotwork method of tattooing using tiny dots this particular tattoo combines two different geometric patterns to give the tattoo a heightened meaning. With the hexagons representing universal coherence and the nautilus shell signifying individual growth, this sacred geometry tattoo demonstrates its wearer to have achieved self-awareness through coherence.

The Hamsa is a popular symbol around the Middle East. It is thought to have originated in Ancient Egypt. Hamsa brings prosperity and good fortune, but it is most significant for protecting its wearer from the ‘evil eye’. Yin and Yang are complementary forces according to Chinese Philosophy. The Hamsa and the Yin-Yang symbols together could denote that – good and evil will coexist in nature, but evil can always be defeated by good. This sacred geometry tattoo brings out a realistic yet very powerful meaning.

Sri Yantra is a sacred geometric figure in Hinduism and esoteric Buddhism. It’s believed to represent Tripura Sundari, a manifestation of Parvati: the goddess of female grace and beauty. The triangles facing upwards in this yantra represent masculine energy embodied by Lord Shiva. The downward-facing triangles signify feminine energy represented by the goddess Shakti. The Sri Yantra symbol – as a whole, symbolises the marriage between the masculine and the feminine forces of nature. This yantra is known as a meditation aid and is said to be able to bring harmony between heaven and earth – and between the feminine and masculine worlds.

See the Sri Yantra come to life on your skin with this detailed tattoo design constituted of interlocking triangles. Each element of the Sri Yantra is intricately rendered, and the outer lines are filled in to create the appearance of a tessellation. As you peer at the tangle of lines, notice how no part of it conflicts with any other, leading you to a sense of balance and belonging in a chaotic world.

Sacred geometry tattoos carry the universal pattern of creation. Archangel Metatron supervises the stream of energy in a cube, which is called the Metatron’s Cube. It contains all of the geometric shapes found in nature and symbolises the pattern that makes up everything that God has created. The patterns found within the cube represent the five Platonic solids, which symbolises those shapes present at the beginning of creation and those necessary for life to exist. Like how a human is born and grows by following this Cube, we too can gain understanding and clarity by looking at the symbolism behind every design we encounter – including our very own bodies – and understanding what we see as we progress throughout our lives. There are circles connected by lines or strings in this symbol. It is indicative of all the aspects and elements of nature being in harmony. If you pull one string, it will affect the entire configuration, thus breaking the harmony. This sacred geometry symbol is also associated with healing and protection. If you love dot work tattoos, the flower of life is a perfect symbol to get inked using the dot work method.

The flower of life is a sacred pattern among the most significant geometric symbols this universe has. It’s the emblem of creation. It is believed to carry the secrets of all the elements of this universe – galaxies, planets, atoms, and molecules. A number of concentric, overlapping circles constitute this sacred geometric shape. The flower of life tattoo signifies that the wearer is on a path of enlightenment. If you customize it with some colors, especially the seven colors of the rainbow instead of the usual black ink, it would undoubtedly make a stunning tattoo, enriching its overall meaning even more. It could mean all the different elements of the natural world, coming together in a harmony to lead to greater enlightenment.

The Mandala represents the highest ideals of sacred geometry, symbolising the universe and the balance between opposite forces. It is a visual harmony that can be used as a balancing, focusing, and centering tool, as well as a reminder of the interconnectedness of all things. Mandalas, in Buddhism, represent the balance between body and mind. The blooming appearance of Mandalas resembles that of a flower. Thus, these patterns could be thought of as nature being translated to geometry. When applied as a tattoo, it can bring focus to the mind and peace to the heart. Some people see the mandala as a bridge between the higher and the lower realms. Mandala tattoos are extremely meaningful art forms, each representing some aspect of the wearer’s life. They are meant to be a constant reminder of what they stand for and serve as a wide-open window into the wearer’s mind.

For some, sleeve tattoos might be a little congested, but these sacred geometry tattoo sleeves are not just tattoos – they are classic art replete with elegance. The detailed structure of these tattoos enhances their clarity, making them excellent pieces of artistic illustrations. By using saturated black ink and negative space, this blackwork tattoo has created a beautiful contrast to make the entire design look like a bewitching ornamental artwork.

For minimalist wearers, this sacred geometry design is perfect. It includes the planets, the globe, the evil eye, the triangle, etc. in the linework method.

Regardless of what your tattoo artist says, there is no denying the popularity of sacred geometry tattoos that are currently in style. Sacred geometry is a system used by artists and architects that has been in existence since the dawn of man. It is a collection of numbers and shapes created by mathematicians and philosophers in order to reveal the universe’s hidden beauty and order through spiritual and religious iconography. A sacred geometry tattoo meaning is based on a metaphysical cosmology which sees the underlying patterns in the universe as naturally occuring.

No matter what your spiritual beliefs are, sacred geometry tattoos possess an alluring sense of mystery. The use of geometric patterns in tattoos has been prevalent since ancient times. Now, tattoo artists and enthusiasts all over the world enjoy the elegant and bold lines that these tattoos use. And sacred geometry tattoos are most certainly not a fad that just goes away after some time.

There are a few more sacred geometry tattoo variations that you can explore:

10 Best Ryuk Tattoo Ideas You Have To...

10 Best Rune Tattoo Ideas You Have To...

10 Best Rosary Tattoo Ideas You Have To...