10 Best Ryuk Tattoo Ideas You Have To See To Believe! 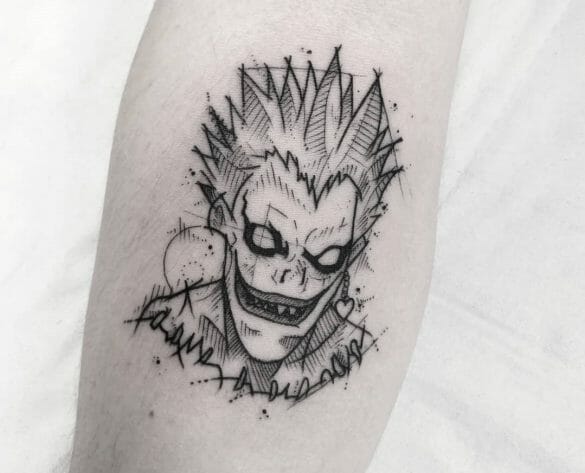 Love Ryuk from Death Note? You’ve come to the right place. Check out this amazing list of Ryuk tattoos curated especially for you.

Tsugumi Ohba and Takeshi Obata’s Death Note, today, is a well-known name for people who are into anime or manga.

Death Note, the renowned manga that inspired many adaptations and several kinds of productions, originated in 2003. Be it an anime television series, a musical, live-action films or novels, Death Note has it all covered.

According to the Japanese culture and religion, Shinigami (death gods or death spirits) are known for inviting humans towards death or inducing death wishes in them. And in the history of anime, or even manga, Shinigami Ryuk from Death Note, despite being a side character, is probably the most remarkable one. Even though Ryuk has a humanoid appearance, his features can be pretty unsettling at times. Ryuk is quite different from most Shinigami. At one point, he gets so bored in the Shinigami Realm, that he decides to drop a Death Note (a mysterious notebook that enables its user to kill anyone whose real name is written on its pages) into the human world, for the sake of some entertainment. His Death Note falls in the hands of a teen genius, Light Yagami who uses the notebook to carry out a worldwide massacre, wanting a crime-free, criminal-free Earth. Although he is easier to understand than any other character in the story, he has a complex personality. He was never a friend of Light, nor his enemy, but he kept Light company. He was Light’s sidekick who enjoyed assisting Light only when he had something to gain from it and hence, was not be trusted. Ryuk, a Shinigami invisible to the people who hadn’t touched the book, had many qualities that made him stand out among the other Death Note characters. In spite of coming from a desolate Shinigami Realm, Ryuk was a happy, humourous, grinning and giggling spirit. Even though Shinigami are supposed to push humans towards death, Ryuk was fond of humans and shy around girls. And his fondness for apples from the human world is also something worth mentioning. Now, if you are looking for a suitable Ryuk tattoo, let us help you make up your mind with these amazing Ryuk tattoo ideas:

Shinigami Ryuk from Death Note was supposed to look like an “attractive rock star”. But his grayish skin colour, spiky hair, yellow-red eyes, blue-grey lips, pointy teeth, abnormally long set of limbs and retractable wings make him one creepy creature. And this tattoo represents his alien-like appearance pretty well. From his bodily features to his clothes and accessories, everything is pretty precise. But the emphasis of this tattoo is on his spiky feather-like wings that he can pull back and extend in order to fly. As Ryuk’s body covers the middle part of the upper back, his wings cover the shoulder blades like angel wing tattoos. If you love and want a large, intricate tattoo at the cost of a bit of pain, then this shoulder blade tattoo is exactly what you should go for.

As Ryuk has mentioned in Death Note, in their world, Shinigami have their lifespan extended by taking the lives of humans. But as we have seen, he was clearly bored in the desolate and barren land of the Shinigami Realm, and so instead of staying where he belongs, he decided to come to the human world for some entertainment. And in the manga, anime, and live-action movies, the audience has been able to recognise his love and fondness for humans. And to watch the humans, Ryuk has often been spotted on top of things from where he could get a clear view of the human world. And this tattoo depicts a scene where he sits on a light pole to observe humans as the night watcher. This calf tattoo requires good hands as it involves a lot of detailing within a small space. So, choose an artist with some experience and you’ll be all set.

As we have already mentioned, Ryuk from Death Note has an eternal love for apples. And in the history of all Death Note productions, that has been a constant. And he has mentioned that he twists his body like a pretzel and does handstands when he needs an apple. And this tattoo is a rendition of Ryuk twisting his body in a disturbing manner as a withdrawal symptom and that of the fact that the set of limbs he has are long enough to allow him to do so. This black ink tattoo would look good on any part of the body of any skin complexion. So don’t waste your time waiting and get this tattoo done today.

In Death Note, Ryuk was a bored God who decided to turn a human’s life into chaos for his own amusement. And just like Ryuk turned Light’s life into his personal drama series, Light used to manipulate Ryuk into doing things that would benefit himself. Even though Death Note has no villain, it has two amazing anti-heroes. Ryuk and Light are both evil in their own, individual ways. And this tattoo captures this essence perfectly. The emptiness in their eyes and the evil grins bring out their wickedness really well. If your love for Death Note is real, you might wanna get this grey-scale tattoo inked on your sleeve. We promise you the experience, despite being painful, will be worth it.

Ryuk Going In For The Kill Tattoo

One might believe that Ryuk plays the villain at the end of Death Note when he writes Light’s name in the book. But, Light, for a fact, was severely wounded after being shot by Matsuda and was very feeble and close to death. And even if he had survived the shooting, he would have had to spend the rest of his life in prison. Hence, Ryuk and his book actually saved Light. And this tattoo is a huge shout out to Ryuk for using his Death Note for a good purpose. And if you believe in Ryuk’s righteousness, this reddish-black tattoo will be a perfect fit for you.

Ryuk On The Rocks Tattoo

Sorry about that pathetic use of pun. Ryuk’s bizarre, abnormally long limbs are one of the biggest factors behind his alien-like appearance. And the tattoo we are looking at apprehends his peculiar body structure efficiently. Even though it is a medium-sized forearm tattoo, the intricate detailing still requires expertise for many reasons. If you really love Ryuk from Death Note as well as his ridiculous postures, you would not regret going for this one.

Although the pointiness of Ryuk’s teeth is extremely unsettling, this tattoo of a grinning Ryuk holding up a V sign is really adorable. Among many things, Ryuk has always had some good in him. Him being a Shinigami never affected his humour and cheerfulness. This tattoo absolutely and undoubtedly stands for the happy soul Ryuk had. If you have loved Ryuk from Death Note, don’t waste a moment and get this inked. You will definitely thank us later.

Like other Shinigami, Ryuk also had retractable and extendable wings he used for flight. But the postures he had during flying were utterly baffling. And one of those awkwardly strange postures has been flawlessly upheld by this tattoo. Despite the tattoo site being broad and the tattoo appearing to be large, this one needs very minute detailing. So, if you know a trustworthy tattoo artist with expertise, you must not wait for too long to get this one done. Be it on your calf, arm or forearm, we can assure you that this tattoo would fit in any part of your body. Getting inked with this one wouldn’t be a regrettable choice, we promise.

The real villain in Death Note is probably greed. Greed is what pushed Light towards the point where he called himself God, whereas he is, in fact, none other than ‘Kira'(‘killer’ in Japanese). Light had a mind full of complexities. His greed for the power of serving justice by killing is what caused his downfall. Ryuk might have used Light for his amusement, but we have witnessed Light taking advantage of Ryuk as well. For example, in one episode of Death Note, Light bribed Ryuk with an apple for finding hidden cameras in his room. This tattoo might look simple, but it interprets and portrays Light’s hunger for power which eventually turns him into the ultimate Death God. The use of shading and colours in this tattoo is stunningly amazing as well.

Apples from the human world are Ryuk’s favourite food and the only thing he is seen eating in Death Note. He loves human-world apples because they are ‘juicy’, whereas apples from the Shinigami Realm taste like sand. Eating red apples is an addiction for him, just like consuming cigarettes and alcohol is for humans. He has also mentioned that he exhibits withdrawal symptoms just like addicted humans do. He was also easily bribed by Light with apples. Hence, the significance of apples in Death Note is really unquestionable. But this vibrant tattoo is too intricate for inexperienced artists, so you might wanna consider all the best options before you get this inked.

We hope you enjoyed checking these tattoos out and now that you have gone through the list of Ryuk / Death Note Tattoo ideas, you should be able to choose or customise one for yourself. But getting a particular design inked is something you might wanna rethink as it will stay with you for the rest of your life. So be careful with your choices and with the help of a good artist with experience, you will be good to go. For your convenience, let us offer you some more Death Note / Ryuk tattoo designs you might wanna look up: