10 Best Rune Tattoo Ideas You Have To See To Believe! 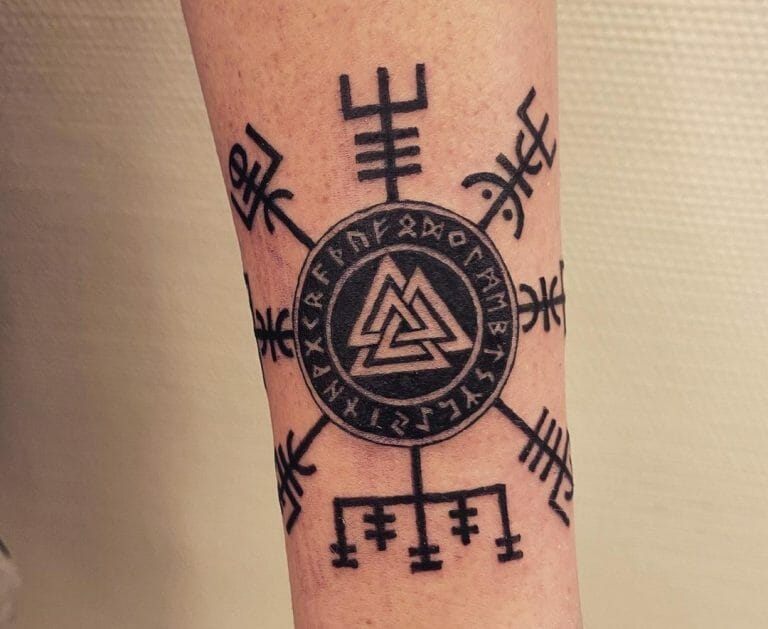 Looking for alphabetic tattoos that will make you stand out? We’ve got you covered with these striking ancient rune tattoos that can be honed by everyone.

Simple and striking, yet so bold and meaningful, Rune tattoos have been a popular go-to for tattoo lovers since the umpteenth time.

We all have come across those geometrical alphabets from series and movies related to ancient warriors or witches. But why and how are these Rune tattoos so popular?

Runes are letters of the runic alphabet which were used even before the adoption of Latin for writing various Germanic languages. As early as 150 AD, runes were in use, and since then, until 1100 AD, runes underwent continuous changes. A rune originally represented a phoneme, but eventually became powerful enough to be known as an ideograph, which would represent even a concept. The three most widely popular runic alphabets are the Elder Futhark (around 150–800 AD), Anglo-Saxon Futhorc (400–1100 AD), Younger Futhark (800–1100 AD) of which, the Scandinavian variants are known as futhark or fuþark. Runes were used in many countries and have been found being used in numerous legendary poems, stories, playwrights, and novels. The countries that are famous for using runes are mostly Denmark and Norway. These countries will forever continue to remind us of the famous warriors called the Vikings.

Why Are Runes Associated With Vikings?

Vikings were mighty warriors, skilled mercenaries, and dangerous pirates. You must be familiar with the Vikings and who they were if you have already watched the series named ‘The Vikings’. Since Vikings were from Denmark and Norway which by default made them use Runes as their language and although there is very little evidence, the Vikings were known to have tattoos all over their bodies that mostly consisted of trees and symbols. Runes soon became to also be known as Viking symbols and thereafter have continued to be a popular tattoo art. Runes, apart from being pretty and minimalistic, its symbolism goes way beyond that. According to occult practitioners, the runes have their own distinct meaning and are associated with witchcraft from the Viking age. Runes hold deep meaning and just like any other ideographs like Kanji, Runes are a popular choice for many when it comes to tattooing them into themselves. Nevertheless, since it is also associated with black magic, these symbols could also be related to curses, and therefore inking them on demands a lot of caution and research. According to historians, several distinct sets of runes were used in different Germanic mythologies and each language was associated with a particular set of runes. Runic symbols are a part of history and most importantly, they usually hold exceptionally positive meanings. This is what makes Runic tattoos one of the best tattoos that will never go out of style. These symbols are for anyone who wants to write a personal and powerful message but in a limited space. Celebrities like Kiefer Sutherland and Avril Lavigne have inked Rune tattoos on themselves. With all this information you are now ready to move on to create tattoos that tell your own reality in your words. Here are 10 of the most striking tattoos that you need to check out before deciding which Rune tattoo you want to commit for:

Rune tattoos are incredibly versatile and can be styled in every creative way possible. If you are more of a minimal tattoo kind of a person, a simple rune tattoo like this one would make a great option for you. What makes a simple Rune tattoo so great and eye-catching is how they can convey so much in just a few strokes. One great way to achieve an even more striking tattoo is by making the symbol big to make it a head turner statement.

Okay, firstly, what is a negative space tattoo? These kinds of tattoos are a modern form of tattoo art that brings out the central design but filling in the sparse areas and making them contrast with skin to bring out the design. These tattoos are mostly created using fully saturated black ink or coloured ink, depending on the skin tone. These tattoos are basically the reverse of traditional tattoo designing techniques wherein the design is directly inked on the skin. If you want a tattoo that stands out in every way possible, a rune tattoo like this one is the best option for you.

Found in most Norse mythology, Valknut is a Rune symbol that was used by the Vikings to honour their deceased comrades. In simple terms, the Valknut rune is known to be the ‘knot for those fallen in battle’. This tattoo consists of three interlocking triangles and symbolises the afterlife. The first triangle stands for the father, the second the son, and the last one signifies a spirit. If you want to honour a deceased friend or loved one, or might just want to show your brave side and are not scared of death, a Valknut tattoo is a great idea for you.

According to the Viking Sagas, the Viking Compass or the Helm of Awe is an ancient Norse symbol that was used as a protective charm by Viking warriors. These compasses were made up of eight staves, each representing a cardinal or intermediate direction, along with a unique rune symbol which was believed to be protective Rune. Aside from being fierce warriors and adventurous, the Vikings also had a deep sense of loyalty towards their communities. Ink this tattoo on yourself to bring out the inner Viking in you who is brave and does not run away from troubles.

Although one might think a normal black tattoo is mundane. But let’s be honest, black is classy and evergreen and no other colour can ever replace it. A simple black tattoo to create a contrast against your blank canvas. Black tattoos go exceptionally well when it comes to inking Runes. If you want to make your tattoo to stand out and give it a Viking tattoos feel, try to get your hands on a stark black ink to make your tattoo really pop out. This tattoo here by @vijin_varghese__ is a great example how a black Rune tattoo can be classy and creative.

If you’re confused about which Runic tattoo to choose to ink, go traditional. These traditional Tattoos use bold black lines that stand out in the most unique way. These Rune tattoos can be inked using different techniques like stipple shading and is definitely going to make your tattoo art stand out. Traditional Rune tattoos incorporate different symbols and patterns to create intricate details and are one of its kind. Norse Runes are simple and powerful and can create an eye-catching design for anyone who wants to ink a Runic tattoo.

If you want your Rune tattoo to remind people instantly of the Viking era, this tattoo is the best option. Incorporate a fierce Viking warrior into your Runic Viking symbol and you’ll have a brand new creative Rune tattoo that will never fail to make people ask you about it. These Viking tattoos demonstrate bravery, courage, and the aggressive nature of the warrior culture, and if you want a tattoo that brings out your brave self in the boldest way, we promise this tattoo is it for you. However, these tattoos demand intricately detailed works so please do make sure to look for a tattoo artist who has a great deal of experience when it comes to creating realistic tattoos.

A negative space tattoo variant, these hand-poked or dotted tattoos are one of the most creative tattoo art that also gives these Rune tattoos their ancient touch with dots. What an artist here does is uses specifically stipple shading to create these stunning tattoos. Most of these tattoos are inked in a black colour to bring out the design in a bold and clean way. The intricate designs and mysterious symbolism that are attached to these tattoos required a skilled hand because of one wrong dot, and you might end up regretting this tattoo for the rest of your life while you could have actually achieved a classic and aesthetic art.

Last but not least are these really pretty and cool tiny Rune tattoos. These simple tattoos are a great option for anyone who is not ready for a large-scale tattoo commitment and seeking a simple, minimalistic Rune tattoo. Like any other Rune tattoo, you can also ink this one in a classic black colour, but if you wish to make it a little different, you can use any vibrant color ink like red to make your tiny Rune tattoo popo out and say a completely personalised story of your own. Apart from the use of different colour, you can also look for tiny yet simple additive designs like in this image where the woman decided to put a line through her Rune text and gave it a unique touch of her own.

Runic tattoos are unique, creative and tell a story of a long-lost history. Each Rune has a deep meaning that can convey a greater story. Runes also depict Viking symbolism and have a lot of untold Viking stories in those pretty little strokes. Most of the Runes that we know today are only because of their preservation through stone tablets and other inscriptions, which also gives us another tattoo idea to ink it with a stone effect. Having a skilled tattoo artist, any of these complex designs can be achieved. These artists will use different colour shades to give your tattoo a 3D effect to make your skin look like a stone with Runic inscriptions and just like that, you can find numerous inspirations anywhere you look for a Runic or a Viking tattoo. With a rich history and super cool patterns, we bet our collection of best Runic tattoos has already made you decide on one (or more) tattoo design. If you want to study more about Runic and Viking tattoos,