10 Best Roman Numerals Tattoo Ideas You Have To See To Believe! 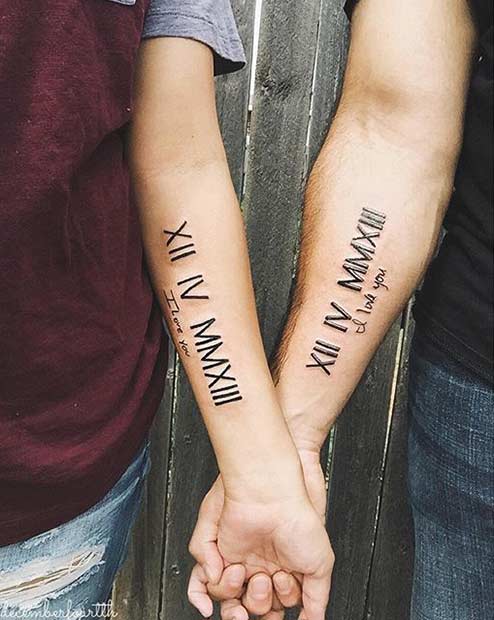 If you’re looking for a good Roman numerals tattoo, then here we have brought the best list of Roman numeral tattoo ideas for you. Many people find meaningful symbolism in number tattoos. Feature image @aleks_tat2 via Instagram

Number tattoos can be considered one of the best ideas for tattoos. When it’s done in Roman numerals, its value increases more in meaning and fashion at the same time.

One of the most popular and stylish Roman numbers tattoo designs is when people get birthdays of people tattooed on them. It can be their own birthday, of their children, of their partners, or someone else who is close to them in their life. Birthdays hold great significance in a person’s life, so these tattoo ideas can be a great choice to honour them.

You can include a similar design of Roman numeral tattoo ideas along with other elements that are close to the person whose birthday you’re inking to give your tattoo idea more symbolism.

Many people ink the name of the people they are honouring through their tattoo ideas along with the significant dates of their loved one’s birthday, death, or a lucky number. These important dates usually signify something of extreme importance to the wearer whereas adding a name, enhances the symbolism and beauty. Like, adding the name of your child in the tattoo idea along with the day they were born.

The birth date tattoos visible in the picture above and the picture below both are written in Roman numbers with a name written across the dates on the collar bones of the wearers.

You can change the font of the name or include a message for the person you’re honouring with the dates or names and come up with a similar design to the pictures above. It can be any message, like ‘my beloved’ or ‘my lifeline’, or something long.

You can include some other outline designs of elements related to the person to make the tattoo idea more personal, like if it’s your child, then you can add their first word or a design of their favourite toy to increase the beauty and meaning of the tattoo design.

There are many different ways you can get a sleeve tattoo – full sleeve tattoo, half sleeve tattoo, 3/4 sleeve tattoo, and more. The best Roman numeral tattoo design you could opt for your tattoo are ones with a slight antique yet stylish feel, like the pictures above and below.

You can experiment a lot with Roman numeral tattoo designs in a sleeve tattoo idea as you get a whole lot of space, thus freedom to come up with a similar tattoo to the pictures above or any other kind of design you want.

Clock tattoos where the times are in Roman numeral tattoos is an extremely popular tattoo choice. It gives the clocks a stylish and antique look. Additionally, clock tattoos represent mortality, endless love, stability, and more. A clock tattoo with its hands at a specific time means that time holds some significance to the wearer.

The beautiful tattoo on the picture above shows an eye on a black ink solid background. Two hands of the clock are sticking out and spinning. The tattoo on the picture below shows a vintage clock design with a few ornamental leaves surrounding it and an eye in the middle of the clock. The times for both tattoos are written on Roman numeral tattoos.

You can choose any type of clock you want, like stopwatch, wall clock, grandfather clock, or more according to your choice.

Black and grey tattoo designs are one of the most popular and older styles of tattoos among many people around the world. While tattoo artists are coming up with many colourful tattoo styles every day, black and grey remain evergreen. The borders, shading, everything in these tattoos is done in black ink and they can be created larger or in smaller designs.

The picture above shows a Roman numerals chest tattoo or closer to the collar bone of the wearer. The tattoo is of the date 03-25-2010 with a bird on the side and the words ‘daddy’s girl always and forever’ written below the date. The picture below shows a unique tattoo sleeve of a clock and rose with the date 11-09-2012 written on the side in Roman numerals.

Roman numeral tattoo design can be incorporated in various tattoos in many different ways, like in clocks, movies, series, and more. We can assure you that they will look good and stylish in black and grey style.

Religious Roman numerals tattoos are pretty common. There are many elements, like doves, lotus, praying hands, angels, or some art pieces, like the ‘Creation of Adam’, ‘The Last Supper’, and more. The date or number in the Roman numerals on the tattoo might represent the date or age the wearer found their faith.

You can get a cross tattoo, a Bible verse tattoo, or a tattoo of Jesus, Mother Mary, or any God from your culture. Include the date or the number in your religious Roman numeral tattoo design.

Many people choose to get tarot card tattoos not only because they believe in these cards, but also because the cards have different meanings that they resonate with. Like, the star tarot card represents renewal, faith, spirituality, purpose, and hope. The symbolic meanings of the sun tarot card are positivity, joy, and celebration. The Major Arcana cards have serial numbers written on the top of the cards in Roman numerals.

Get a tattoo of the tarot card which has a meaning that you feel connected to or means something that you want to express through your tattoo.

The amazing old school Roman numerals tattoo forearm on the picture above is of the lover’s tarot card with its serial number 6 written on top in Roman numerals and some designs of flowers and leaves surrounding the card. The stunning tattoo on the picture below is of a couple holding hands with the date 09.10.13 written below the design.

You can incorporate elements that you and your partner both have a deep connection with or lines of your song to your Roman numerals couple tattoo.

Roman numerals with eye tattoos are mainly of eye clock tattoos with times written in Roman numerals. If you’re wondering what does an eye with Roman numerals tattoo mean, they generally represent mortality and the importance of living life to the fullest. Eye clock tattoos might symbolize protecting the little time we have left and guiding and focusing your time keeping that in mind.

You may have found the tattoo you like the best. Even if you haven’t, we still have some suggestions for you –