10 Best Rock Of Ages Tattoo Ideas You Have To See To Believe! 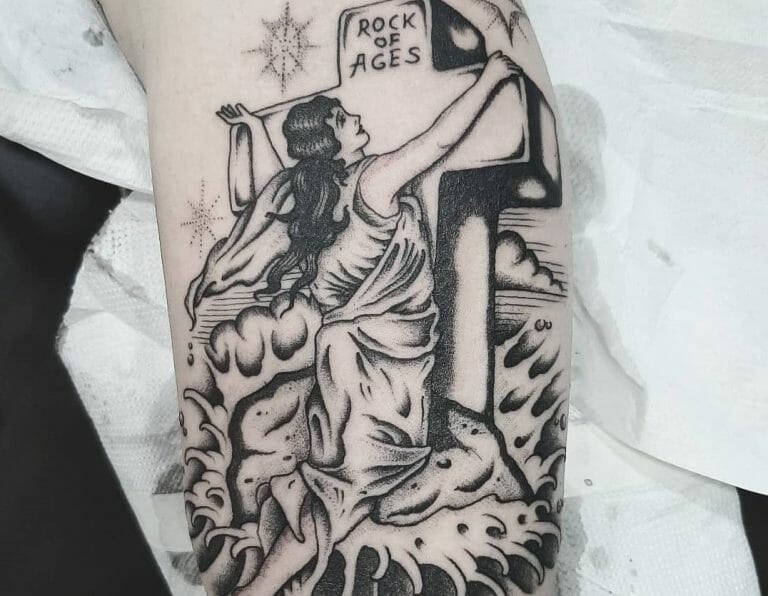 Looking for a classic religious image to be tattooed on you? These 10 unbelievable rock of ages tattoos are just the inspiration you need.

Have you been connecting with your spiritual side lately?

Many people choose to get religious tattoo imagery on their bodies to feel more connected to their spirituality. Rock of ages tattoo design is the best choice for anyone interested in getting a traditional religious tattoo.

Read on to find our take on the 10 most amazing rock of ages tattoos that are sure to take your breath away!

This rock of ages traditional tattoo is a classic representation of the general idea of rock of ages.

The rock of ages renown originates from a hymn written by Engish Reverend Augustus Toplady around the late 1700s. The hymn reads “Rock of Ages, cleft for me; let me hide in thee” and is a homage to an experience where he sheltered from a storm in a cleft in a rock face.

Of course, the original rock of ages was based on a general rock. Unlike its depiction in tattoos which portray it as the cross. The stone crucifix is one of the most common motifs incorporated in such rock of ages tattoos. It is inspired by the biblical portrayal of Christ as the spiritual rock and represents Christ as the only guiding light to the lost soul.

This old-fashioned colourful tattoo is firmly rooted in the belief that our faith always guards us. Moreover, this tattoo is a representation of hope, religious beliefs, and love. This is one of the most popular tattoo designs that you must get if the aforementioned values resonate with you.

In the 1860s, a hundred years after the hymn, the Rock of Ages was turned into a painting by Johannes Oertel. Originally, this painting was called “Saved or an Emblematic Representation of Christ’s Faith”. But because of its wide association with the hymn, it was later renamed Rock of Ages.

The painting showed a woman praying at the stone crucifix. This classic religious image has become an emblematic representation among rock of ages tattoos of the world. Several tattoos incorporate the image of a woman or two women mourning the husband who died at sea. The cross represents the tomb.

If you are looking for an emotional tattoo to commemorate a loved one or simply pay homage to love, then visit your nearest tattoo shops with this design now!

For lovers of clean script work, this calligraphy-based lettering tattoo will definitely shape well. This tattoo combines a classic religious image with the philosophical belief that what doesn’t kill you makes you stronger.

For people in search of a tattoo perfect for a smaller canvas like the arm, this is it. The message from the hymn written on top of the symbolic cross makes for a perfect tribute to a person’s inner strength. It is a reminder to keep fighting against hardship and to keep moving forward. If this strong message is your thing, then we have you covered.

Tattoo shops and artists across the world have taken the traditional rock of ages design and given it a fair share of imaginative upliftment. This bright and bold tattoo makes for a rad makeover of the original.

Making for a colourful sketch in the flat art style, this is a modern and contemporary rendition of the traditional Rock of Ages tattoo. The design incorporates all the motifs including the stone cross, beautiful woman, a depiction of the storm at sea and the bible. A perfect religious memento to have tattooed on your body.

One of the strongest elements of the rock of ages designs is the dramatic naval theme. Sailors in history shared a common belief that wearing a rock of ages tattoo design was a kind of a lucky charm. It was said to protect the individual wearing it and draw the blessings of Christ. Even today, many people hold on to this belief.

This image is perfect for tattooing because of its colourfulness, a ship caught in a storm, beautiful woman, and religious symbolism. Moreover, because of its unique pairing feature, this would make for a rad look on anyone wearing it!

Religion and spirituality are always unique to the believer. Who says you can’t borrow the best from different religions?

Here we have one of a kind rock of ages design where the rock is replaced with the Fudo Myo letter. In Buddhist philosophy, Fudo Myo is one of the five lords of light. His threatening appearance guards the Law of Buddhism. Fudo Myo is revered as one who guides the spiritual traveller past temptation on a path to enlightenment.

This tattoo design is ripe in religious symbolism with a wide appeal. If you are a believer in the best of Buddhist and Christian spirituality, then this is the perfect tattoo for you!

For people who like to be heavily tattooed with massive and intricate tattoos, we have the perfect rock of ages tattoo design for you!

This rock of ages design captures every element of the classic tattoo in a complex and intricate design full of colours, details and incredible symbolism. We have the woman praying at the Holy Cross, the dramatic naval theme, and several other traces from history.

Due to the massive shape and detailed design, this tattoo is perfect for a larger canvas such as your back or torso. Make sure to get the best artist working on this, for this will be a long ride!

Another intricate rock of ages design done in an imaginative pop-art style!

This design is perfect for people who are looking for a creative and funky tattoo with a traditionally religious theme. This tattoo essentially retains all the significance of love, faith and belief as in the original one but takes it a notch higher with the funky, pop art style.

Contrasting colours and hues bring this one alive as a visually stunning tattoo that strikes the perfect balance between old school and modern.

Our favourite is this uniquely incredible reimagination of the rock of ages design. This smart design incorporates the woman’s face upon the cross. Several other elements such as the bible, the clouds and the bird add several layers of meaning to it.

Because of the compact shape and design, this tattoo works in quite a few places of your body including the arms, legs or back. If you are simply looking for an eye-catching design, then this is your stop!

Rock of ages tattoos are some of the most demanded designs in the world among tattoo enthusiasts despite being rooted in history and religiosity. They work perfectly for both men and women.

If you liked our recommendations for the rock of ages tattoos, then try out these tattoo ideas too: