10 Best Ring Finger Tattoo Ideas You Have To See To Believe! 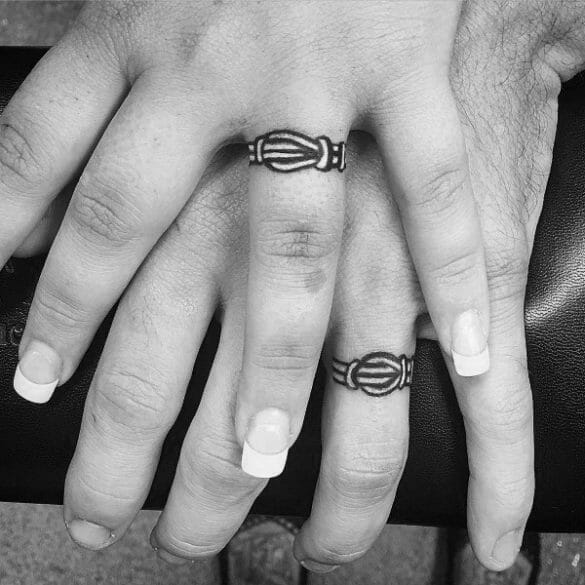 When it calls for something minimalist and eye-catching, nothing beats a ring finger tattoo! Check out the list here and have your pick.

Cultures across the world have picked up the Western trend of associating the fourth finger on the left hand to notions of loyalty, the eternal bond of trust and enduring love.

Mainstream media and popular culture in tandem with capitalism have propagandized the importance of diamonds for wedding rings. Be it about displaying the social status of the married couple or representing the woman’s right to financial security, diamond wedding rings is so many different things besides a universal trope for a ‘forever fairytale romance’ sort of love story.

While some people choose to get themselves inked with a wedding ring tattoo as a substitution for the ring itself, others bug their tattoo artists to curate an ensemble of ring tattoos and finger tattoos for them which will never go out of style. In case you are a bride or groom to be, the wedding ring tattoo designs are just what you need to pull off your engagement ring with a panache! And for those in search of some cool ring finger tattoo ideas to get themselves inked, to quote Beyoncé, without further ado let’s “put a ring on it”.

Wedding ring tattoos can be worn by a couple either to accessorize their wedding rings or as a substitution for that thing. The couples can opt for unique as well as matching tattoos to adorn their respective ring fingers. As shown in the picture above, the couples are flaunting the initials of their beloved’s name on the ring finger. You can choose the font and style based on your preference.

Ring tattoos take the notion about diamonds lasting forever to an epiphanic dimension, because everybody knows that the one thing which can beat a diamond ring in the race of time, is a tattoo!

Once customized, the wedding ring tattoo becomes a reflection of the unique bond you share with your partner. Unlike diamonds, both of you can decide either on full names or the initials of the name of that special person and get it inked to stand the test of time.

Just as the name suggests this one is a sparingly beautiful design. A single black line circling the ring finger is at once chic and profound. This is a gender-neutral design and can be experimented with in terms of width and texture.

The beauty of a simple ring finger tattoo lies in its minimalism. Unlike, bold and extensively intricate designs these finger tattoos strike a balance between elegance and finesse.

The design can range from a simple band tattoo resembling a wedding band or alphabet or the wedding date inscribed on the band to commemorate the beginning of a beautiful journey together.

This is a subtle variation on the theme of wedding ring tattoos which as we are about to discuss further can be of many types. The band style by virtue of representing the wedding ring itself becomes an experimental take on the concepts of ownership and status symbol which are generally associated with diamond rings.

Knotted ropes symbolize a bond that stands the test of time. These are identical tattoo designs meant to be worn by both the partners on their ring fingers to express their commitment towards each other and in the relationship.

Like most wedding tattoos, this one too is can be worn alongside the ring. The rope metaphor blends in the taut tension between bodies that are ephemeral and a love that is eternal. The rope being the symbol for materiality and the knots as signifiers of eternity.

The 21st century has witnessed a rise in the popularity of the infinity symbol. There is hardly any tattoo artist who has never done an infinity design for their customers. As is self-evident, this sign stands for eternity and beyond. The permanence of this sign has rendered it a quality that is intimately and inextricably linked to the notions of eternal love, traditional vows and fidelity.

Of all wedding ring tattoos, this one allows maximum scope for experimentation. The tattoo design can be made ornamental with flower motifs or distinguished ring detail to replace the actual wedding ring. Or as is shown here, can be kept pretty neat with just a couple of arrow designs on either side. The best thing about this one is, you can wear it as a wedding ring replacement or just a simple ring tattoo.

The cool conglomeration of rings ranging in width from bold to sleek, the stack ring finger tattoo is every tattoo artist’s dream design and every tattoo lover’s consideration. The ring tattoo redefines elegance with a dash of cosmopolitan chic and a pinch of creativity! One can choose to wear this stack of ring tattoos with a quotation or his name inscribed alongside it. As shown in the picture, the tattoo artist has incorporated symbols alluding to various pop culture discourses ranging from Harry Potter to Cyberpunk.

One of modernity’s tendencies is to cultivate the nostalgia of a bygone era within the contemporary discourse. In sync with this practice here we have a tattoo that resurrects the ‘The King in love with the Queen’ trope through a beautiful pair of matching crown tattoos. The crowns signify royalty, grandeur, and the larger-than-life concept of romance.

Tattoos featuring an actual wedding ring design or initials of the couple or the engagement date can become a tad kitschy over time. Here we have a design that blends in the extra drama to a level of sublime subtlety.

Unlike most wedding ring tattoo designs, this can be worn simply as a ring tattoo that draws inspiration from the mandala art form and can or cannot be coupled with a ring. Exactly what makes this particular body art so attractive is hard to pin down. But the densely packed black ink gives it a psychedelic touch and render it the quality of wedding bands.

This wedding ring tattoo is for those who love to scribble outside the margins! Replacing the wedding ring with a motif that seems like a cross between barbed wires and a nosegay made of twigs, this ring finger tattoo not only manages to earn a critique of the bourgeois label put on diamond rings but also offers fresh perspectives on what we understand as ‘love’.

Again, this is a sparing design that drives home the point: “less is more”. The charm of this design is heavily centered around its essentially deconstructive appeal which exposes the void lurking underneath the surface of bourgeoise materialistic values and conventional attitudes.

A chic ring finger tattoo for those who swear by music. This is a neat design that can vary in size and colour based on the tattoo lover’s preference. The minimalist design draws attention due to its clever application of the spacing technique.

The ring finger also stands for honour. Many people choose to inscribe the names of their lost ones on this particular finger to immortalize their memories. Different kinds of symbols and signs can be ensconced in words like “love”, “life”, “dreams” etc.

If we look back to the tradition of ancient Rome, the betrothal ring on the fourth finger on a woman’s left hand symbolized the man’s legal ownership over his wife, this concept found its way into Christian tradition in the Middle Ages since when engagement rings have started to play an important role in determining a woman’s financial and social status. During the depression era in the 1930s, the diamond engagement ring as promoted by the United States became a tangible symbol of financial commitment on part of the man and a financial security backup for the woman. Today, the traditional wedding rings have become an aspirational norm for millennial couples without which their wedding photoshoots seem to remain ‘incomplete’. Like most viral trends, this too has been burgeoned by capitalism in collaboration with mass media which for its most part is anti-feminist and deeply conventional. The corporate market campaigns lured the world into believing that diamonds are rare, precious and signs of an everlasting love. By 1965, 80% of American brides were opting for diamond engagement rings.

Once we have reflected on the traditional and patriarchal baggage that diamond ring carries, it is on us to decide whether we will choose a ring finger tattoo over a diamond ring which often is a product of marketing manipulation that has massively prompted the craze of diamonds when supplying these diamonds was oppressive and unethical.

Apart from this exclusively curated list, you can also check out more variations on the theme such as-