10 Best Rhino Tattoo Ideas You Have To See To Believe! 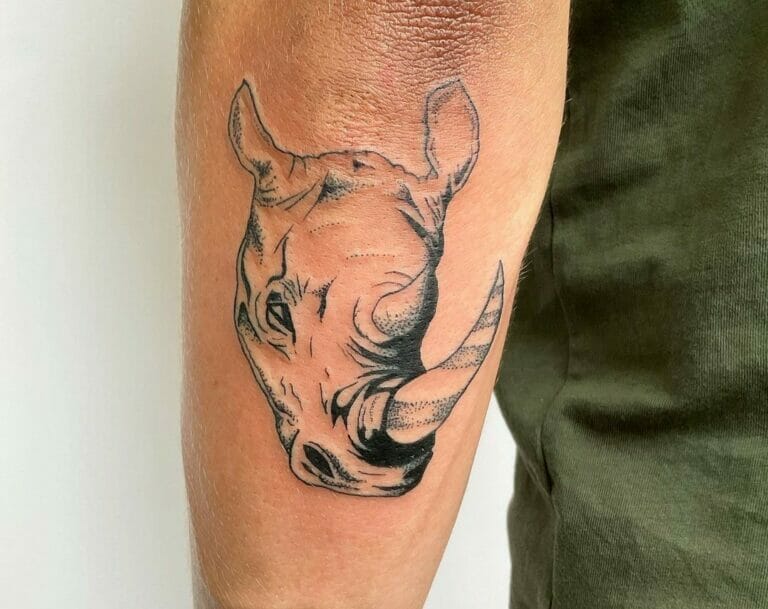 Time’s up for being a slothful bear, scooping on all the honey. Make it spicy, charge the beast in you with these amazingly exuberant rhino tattoo designs.

Who wants a unicorn when you have the haughtier rhino?

Just don’t wait to turn on your beast mode if you may. Seek inspiration from these tenacious rhino tattoo designs, grow relentlessly and snatch the style game.

Guess by what means rhino tattoo designs have been in vogue? Most of the time, the significance of the animal tattoo meanings depend on the nature and unique traits of that animal. Consequently, the rhino tattoo meaning depends on a basic question- what does rhino mean in a rhino tattoo design? According to history, the word rhinoceros came from the Greek word “rhino” meaning “nose” and “ceros” meaning “horn”; for centuries these beasts are believed to pose the symbolism of agility, power, confidence and wilderness. This resilient animal is generally passive, not so dangerous but can be threatening when messed up with; just as cool as one might wanna be. Aren’t these amazing traits cool enough to consider a rhino body art just the appropriate one for you? Right before you rush to make one made for you, check out the latest and the popular categories of rhino tattoos that are waiting beneath to win your heart.

This tribal rhino tattoo is impressively flamboyant. It is absolutely fascinating to observe the colourful patterns all over the body of the animal that makes this tattoo so unique. The colourful pentagons making a floral pattern of six evokes an aesthetic vibe. Tribal rhino tattoos reflect the artwork from the different regions of the world; this particular rhino tattoo is Mexican. “Te guesta?”, the tattoo exhibit a wide variety of colours including white, indigo, blue, green, yellow, red with a black outline. Get this fascinating tattoo inked for it would appease all the colours that you wish to paint your vogue with.

The Iron Rhino Tattoo For The Resilient Souls

This rhino tattoo has been inked in greyscale and as its name suggests- the iron built of the tattoo picture adds a sturdy and valiant essence to the body art. The iron rhino is also the representation of the black coloured rhinos of Africa. However, the 2oth century has witnessed a threatening decrease in the population of these rhinos, but the rhino tattoo idea is still so much in style. This rhino tattoo presents the symbolism of power, strong will and agility. Get one inked for you and spread more awareness that would help in preserving these wonderful creatures.

These types of rhino tattoos express the skin of the animal as being made of iron. Rhinos generally have tough skin that confirms their ability of endurance and protects them from their enemies. These bold tattoos rightly weigh the rhino’s ability to endure. This tattoo is the one for you if you believe in the fruitfulness of patience and endurance.

Rhinos are generally compared with beasts due to their tremendous size, however, this tattoo (drawn on the forearm) is quite different, it depicts the rhino flying high while being tied to five balloons; the stars, the crescent moon and the little bird altogether evoke a gentleness or harmlessness, a harmonious scenario in which a rhino is left undisturbed. The rhino, being a heavy animal with tough and agile qualities has been lifted high up in the sky; this concept hints about the weightlessness of letting go of the stubborn attitudes. Lighten up your mood with this cheerful and benign rhino tattoo.

The African Dawn And The Rhino Tattoo

This rhino tattoo is very popular due to the spiritual realm in its illustrations. The vibrant colour of the sky, the egg yolk-like sun and the rhino’s silhouette present this tattoo as divine as it is seeming. The dawn in this rhino tattoo symbolises the rebirth and rejuvenation of life; the rhino and the floral ground match up to strike a balance between the aggressive nature of the rhino and the gentleness of the floral ground, filled with all the blessings of the ancestors, evoking the essences of the spiritual realm. If you are a person of equipoise and seek stability in life, this rhino tattoo is purely the appropriate one for you.

This tattoo enhances the significance of the gift of mother nature. This rhino tattoo brings together a bird, a koala, a panda and a rhino. These types of rhino tattoos exhibit the true balance in nature that mother nature confers us. The animals as the koala or the panda are peace-loving, lazy and meek; however, the bird is rowdy and the rhino is both calm and aggressive at different moments. Hence the balance in the natural world as well as in the characteristics of an individual is the prime factor of this rhino tattoo. Steal the inspiration and get one inked for your poise vogue.

The meaning that this tattoo conveys through the animal in the blue shade is again the balance that nature maintains. The connection between the strong and the meek is well balanced for the harmony that prevails in nature. In this tattoo, the little bird, the fresh flowers set a contrast to the giant animal, the rhinoceros. Own this beautiful and vibrant rhino tattoo ’cause it would make you feel close to nature.

Rhino tattoos of this kind would impress your philosophical acumen, the rhino tattoo in this post portrays a rhino balancing on a ball with the cityscapes resting on its back. The meaning of this kind of rhino tattoo include philosophical ideas, the rhino in this tattoo express the symbolism of the tremendous power and the ambition of humans, but the danger lies in a slight disbalance of excessive power-mongering which could crash the entire system and mark the deterioration of the society. Identify and choose the right rhino tattoo which would correctly suit your intellect.

This tattoo depicts the rhino being struck with an arrow on its head, one of the possible meanings of the tattoo can be one’s realisation about the ill consequences of being arrogant, the arrow struck rhino could possibly enhance the idea of one’s ability to overcome the impulsivenesses and be more composed and wise.

The Comical Masterpiece Of Rhino Tattoo

This cartoonish example of a rhino tattoo is a comical masterpiece if the tattoo is observed very minutely. The body language of the rhinoceros has been depicted in a hilarious fashion; this rhinoceros with two horns wears a scarf around its head. It is seen to prepare its food as it cuts the fillets of a fish with a ravenous expression and crooked fingers for holding the knife. Rhinos are generally not as funny as it has been portrayed here which makes this rhinoceros tattoo so different, Rhino tattoos of this kind are apposite for matching up with your great humour.

This comical representation of the rhino tattoo reminds oneself of the wonderful creature, the unicorn. In this tattoo, the rhino has been given a majestic appearance with all the glorious jewels and ornaments. Unicorns can be imaginary, but rhinos are real, it is just as cute and chubby with an innocent gleam in its eyes and a little nose-horn duo with rainbow-like colours. This tattoo would win your heart also in case you have a little one as chubby and jolly as the tattoo.

These kinds of rhino tattoos are very basic with simple line diagrams in greyscale but this particular one is very creative, the simple status of the rhino doesn’t attenuate its agility and confidence. This post portrays the rhino’s face on the back of the person; it may seem simple but this tattoo accentuates the simplicity of the wildernesses that prevails in nature. The single line tattoo would definitely suffice the Picasso in you. Hurryup, and get one minimalist rhino tattoo inked for your skin would love to wear it in style.

The Rhino Tattoo Of Inspired Fear And Amazement

Rhinos have always inspired fear and amazement among humans. These beasts are incredibly unique due to their contrasting characteristics; this animal remains passive and spend their life peacefully, however, they can become even more dangerous than the bulls when messed up with them. This particular tattoo evokes a fresh feeling with the crimson sun rising; the rhino, however, evokes a sincere, elegant and serious vibe of admiration that would definitely win the heart of many. Get this gorgeous rhino tattoo inked for deriving all the inspiration and confidence to snatch the style game.

The Brand Envoy Rhino tattoo For The Athletes

Let your vogue do the talk. This gorgeous rhino tattoo would undoubtedly spur your confidence and acquire a lot of admiration with the Nike label on it. This tattoo is the perfect business tattoo for it would impress anyone due to the athletic connection of this tattoo that makes it suitable for Nike lovers as well as sporty souls. Rhinos are symbols of power and strength, when combined with Nike, this brand envoy rhino tattoo is all you need to speed up your vogue.

Rhinos are associated with ideas related to strength and agility, you aren’t here for no reason because all you need is the right inspiration that would push you out of your comfort zone and rhinos, if not unicorns, would do the magic if you let your skin embrace its tattoos. Here are some more interesting categories of rhino tattoo ideas that would do the trend talk on your behalf.