101 Best Religious Tattoo Ideas That Will Blow Your Mind! 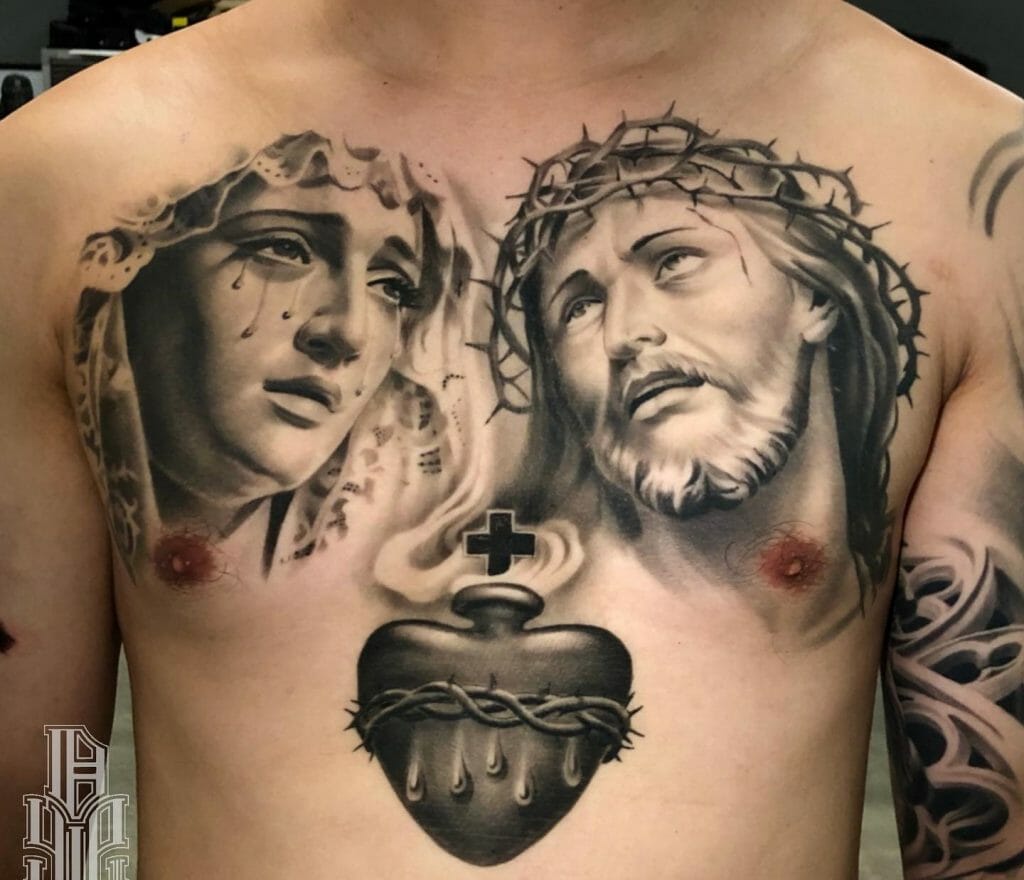 People choose to get religious tattoos to express their religiosity and faith.

Spiritual concepts were at the origin of some of the first tattoos in history. These kinds of tattoo designs are used to allude to a higher power or represent moral values of love, faith, and optimism.

Many significant spiritual or philosophical tattoo designs really came from old organized religions. Many of these tattoo designs allude to a higher power or represent moral values of love, hope, and faith. Religious tattoo designs started getting popular as various religions grew across many areas of the world, and they were worn to signify a commitment to the faith.

Check out our collection below if you want to discover unique and amazing religious symbol tattoos and know more about the significance behind them.

Jesus Christ tattoos are a sign of strength, faith, and love that can be used for religious purposes or just to represent life. For some, though, it is simply a symbol of optimism. Christ wearing a crown of thorns is the most popular picture. This demonstrates a commitment to persistent memory of pain and self-humbling. Some individuals consider it to be the pinnacle of their trust in Jesus and his teachings.

Another religious belief behind these kinds of tattoos is thought to be loyalty. As most people are aware, few figures in history have come close to being as dedicated to their followers as Jesus. If you take satisfaction in being a good and trustworthy friend to others, this might also signify self-loyalty. Did you know, that sailors in the early 1930s and 1940s often felt the need to wear religious symbols on their bodies, such as Jesus’s head? They believed that doing so would pacify the angry forces responsible for storms and drownings distant from home.

Full Sleeve Christian Tattoo With Jesus Christ And Other Elements

According to the Bible’s account of Noah’s ark, a dove returns to the ark bearing an olive leaf, signalling to Noah that the waters are going to settle down. As a result, the dove in Christianity is used to symbolize the Holy Spirit. The dove was also associated with the goddess of love according to Greek mythology. On the other hand, an angel is regarded as God’s messenger. Piety, spirituality, and religion are typically symbolized by a robed, man-like figure with wings.

The tattoo in the picture has a lot of tattoo elements in it. It beautifully showcases an image of Jesus Christ, with his head wrapped in chains of nails, a dove, a cross with a picturesque sky in the background, and an angle with their wings outstretched battling and defeating a demon and bringing the demons head under their feet. Sleeves tattoos are one of the best body art designs for an individual.

Long before Christianity, the cross sign was known to be used in the ancient world. Then it was taken in by Emperor Constantine during his reign. In Christianity, the cross is an ancient symbolism connected with sacrifice. It has long been associated with power and spirituality. A cross tattoo may also be used to convey faith and optimism. Cross tattoos are a reminder of spiritual connectedness, especially for persons who have experienced physical or mental hardship.

Many people use the cross to commemorate loved ones, especially when wording is added. Names can be written inside or around the cross. They can be inscribed on a ribbon that covers a portion of the cross, either above or below it, or as a circle. You may also provide a date of your loved one’s passing as a reminder.

There are also various other types of cross tattoo designs that you could go for. For example- Latin, Greek, St. Andrew’s, Jerusalem, Celtic, Ankh, and Crucifix.

Beautiful Rosary Tattoos On The Hands

Rosary tattoos are one of the various symbols that characterise Catholicism. Both men and women get these tattoos, and the designs and portrayals differ from person to person. An association with the Catholic Church is the most prevalent motivation for having a rosary tattoo. Some people, however, get it for aesthetic reasons.

A rosary is utilized by a Catholic believer to pray. For believers of this faith, it is a sacred object. The rosary was originally made up of five sets of 10 beads each. This group of 10 is also known as a decade. The Holy Cross is at the end of the beads and chain.

The rosary is used to keep track of how many players have been prayed for. Every bead represents one prayer spoken, and the decade’s conclusion represents a divine mystery. A chaplet is a name given to the beads on a rosary. While the Holy cross is a tool for prayer, it is also frequently used to ward off bad energies, evil spirits, and demons.

The Virgin Mary is well recognised for being Jesus Christ’s mother. Her other names are Our Lady, Madonna, and the Blessed Mother. The Virgin Mary, whatever you choose to name her, is a significant icon in the Christian religion, making it one of the top options for a religious tattoo.

The struggle between evil and good, justice and wrong, is symbolized by an angel and demon tattoo. It’s a popular option among males who are suffering from temptation, bad thoughts, or perceived character flaws. The artwork makes a strong message since it plainly depicts two opposing viewpoints. If you want to utilize the devil as a reminder of the difficulties you’ve conquered in the past, and use the angel to represent the hope and brightness that your future promises, it may be able to take on a more positive connotation.

An angel tattoo generally represents guidance, innocence, and optimism, and it symbolises the balance between heaven and earth. They are supposed to safeguard humanity and assist us in making smart judgments, however, this might vary based on the images you choose. For example, to memorialize a loved one who has influenced your life, you might choose an angel wing and halo remembrance item. You might also get a guardian angel tattoo to commemorate your relationship with God.

Colourful Jesus Christ Tattoo With Bird On The Sides

One of the most common religious tattoos for men is a tattoo of Jesus Christ. In this coloured tattoo, the tattoo artist has used orange, blue, white, and black as the primary colours. There are pictures of birds on the side, symbolising peace and harmony. Also, the tattoo of the red roses means mercy.

A tattoo of a sobbing angel is a sorrowful image, but it is also beautiful because of its deep significance. It might be symbolic of the death of a family member or an acquaintance, or it could be more abstract in nature. For some people, the main aim of this artwork is on the tears themselves, and they believe that the angels cry for us when we are unable to grieve and mourn for ourselves.

This tattoo of an angel depicts an angel with her hands together looking in the distance and crying profusely. There are additional details done on her head and cheeks.

Half Sleeve Tattoo Of Jesus Christ With Crown Of Thorns

Crown of thorns tattoos are one of the great options for religious tattoos. Jesus Christ was sentenced to death in front of his own family and crucified for 6 hours. The tattoo effectively depicts a painful image of Jesus Christ, complete with a crown of thorns on his head. For his excellent efforts, he was eventually sacrificed. The agony in Jesus’ countenance is well depicted in this tattoo. This will transform your life by reminding you of his sacrifices and allowing you to pursue a more meaningful career. There are additional details of 3 crosses in the background of the tattoo with some additional flowery designs on the side. The tattoo artist has shaded the whole tattoo perfectly.

Sleeve Tattoo Of A Dove, Flowers, And A Beautiful Clock

A clock tattoo is used to signify the passage of time or a significant date or hour on a particular day. On the other hand, this specific tattoo can also represent the beginning or end of life.

The tattoo artist has painstakingly done the complete sleeve tattoo design and has given it a perfect combination of attention-to-detail and shading to give it a more naturalistic look.

What do religious tattoos mean?

What are some popular religious tattoos?

There are a number of popular religious tattoos that people choose from. Some of the most popular include crosses, angels, and other symbols associated with Christianity. Other popular choices include stars (for Judaism), crescent moons (for Islam), and Buddhas (for Buddhism).

What do religious tattoos represent?