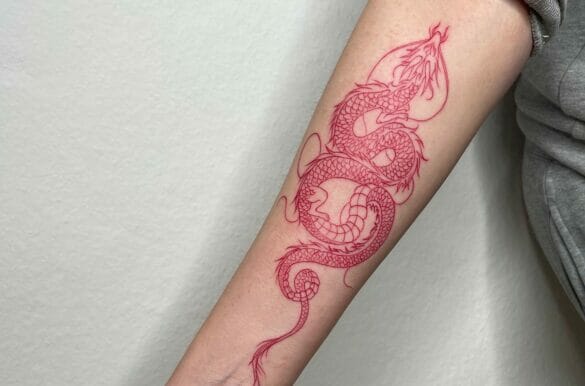 If getting a dragon tattoo is your fantasy, then check out these jaw-dropping red dragon tattoo outline ideas that will win your heart instantly.

People who were once kids that loved reading fantasy stories of fire-breathing dragons and gallant knights are now obsessing over dragon tattoos.

Dragon tattoos are not only in demand among the followers of fictional fantasy. Most people are inspired by Eastern folklores and legends.

There is a stark difference between the portrayals of dragons in the Western and Eastern worlds. The occidental cultures sketch the dragon as an incarnation of the devil. The dragons in the western culture are generally seen as dinosaur-like creatures breathing fire and walking on four legs with gigantic tails and bat-like wings. But the Asian culture promotes the image of the dragon as a positive and hopeful symbol. There are Japanese dragon tattoos, Chinese dragon tattoos, and Korean dragon tattoos that are more dominant. These dragons are often represented as wingless serpents with three claws, and their symbolism inspires Asian people. These dragons bring fortune and are mostly related to divinity, fate, and faith. On the other hand, westerners like the Mexican and Nordic Viking dragon tattoos are mainly representative symbols of death, destruction, and rebirth. Dragon tattoo lovers must know the symbolic meaning behind each dragon image and choose their tattoos accordingly. Here are some amazing red outline dragon tattoos for you.

The red Chinese dragon tattoo is very famous among those who believe in spirituality. The red dragon is the manifestation of good luck and happiness. It is often used in Asian cultures as a token of luck and love. So tattoo lovers who are fascinated by dragons often opt for a red dragon tattoo. This tattoo is an inspiration for them if they face difficulties in life. Women and men who need such inspiration to uplift their hopes in luck can go for it.

Again this is a red dragon tattoo design that is drawn magnificently. The wraparound Chinese dragon with its dangerous whiskers and the fire-bearing tail is tattooed on the leg. It is a small yet detailed tattoo. The scales of the red dragon are finely thorough and exquisitely drawn.

Getting a tattoo on the leg is an aesthetic way of attracting onlookers. It often symbolizes masculine energy. The symbol of the red Chinese dragon on the leg is such a thrilling and inspiring image. It encourages the tattoo-bearer to have faith in the power of fate and makes them trust their destiny. Chinese dragons are the symbolic representation of the power to control natural disasters like typhoons, rainfall, or floods. The power over strong forces is what the dragon tattoo determines. This dragon tattoo will look gorgeous on women too.

Tribal tattoos are everywhere, blooming with increasing demand among the new generation. A tribal dragon tattoo design is no exception. This tattoo on the arm is a fantastic one. The red dragon seems badass and ferocious. The tribal touch to it has been done neatly with beveled edges.

Tribal dragon tattoos were mostly done to connect with nature. As dragons were thought to be magical creatures commonly related to witchcraft, tribal people were more willing to have them on their good side. Also, as dragons bring affluence, a tribal fighter would often get tattoos of the dragon to slay the evil and earn victory. If you are looking for an ancient tattoo design with spiritual meanings, then getting a tribal tattoo of the Chinese dragon would be a wise choice.

Dragons and flowers might be a juxtaposition, but they sure go well together. This Japanese dragon tattoo design on the thigh of a girl looks elegant and sexy. It seems as if the red tattoo ink glided smoothly on the skin and left such a gorgeous art.

Japanese culture often incorporates lotus and dragons together. It is generally a type of Asian art. As the Japanese dragon represents protection against natural calamities and good luck, the symbol of the lotus heightens the significance of this tattoo. The Japanese dragon is a water deity who protects humans from all dangers, and they have often been assigned the greatest importance in Japanese myths and folklore. The lotus also bears an equally important significance. It is the representation of wisdom and enlightenment. Clumped together in single tattoo art, these two symbols form an aesthetic aura. Girls who fancy such a gorgeous tattoo may replace the lotus with roses, and it will still be meaningful.

This small dragon tattoo on the back of the arm is impressive. It has got a nice appearance to it. The simple and beautiful tattoo would amaze the onlooker even at first glance.

Small and cute tattoos are very feminine. But that does not mean men cannot have this tiny dragon tattoo. This tattoo would look equally beautiful in black or blue. The Chinese dragon tattoo acts as an inspiration for young girls and boys in China and other Asian cultures.

The next tattoo is of the Viking ouroboros, the dragon eating its tail. This is again a small tattoo on the inner wrist. It looks charming. The details on this tattoo are praiseworthy as the tattoo designer has aced it with perfection.

Ouroboros is a figure from Norse mythology that is popular as a form of Viking tattoo art. The meaning behind such a symbol is sublime. The coiled dragon or Jörmungandr is the child of Loki, god of fire and mischief. This fierce dragon is also sometimes depicted as a snake. And it is related to the cycle of life and rebirth. There are many other meanings associated with this Viking pattern. Girls and boys who are bored of Chinese dragon tattoo designs can get this one.

This is not a tattoo of the Chinese dragon. Neither is it a tattoo of the Japanese dragons. Rather, it is the sign of the Quetzalcoatl, the Mexican feathered dragon deity. The Aztec culture celebrated this entity. It is a sign used to represent death and rebirth. Women and men can both opt for this tattoo as it is unique and looks cool.

The red and black dragon stands for the sign of yin and yang in Chinese culture. The red dragon embodies the good side of nature, and the black dragon symbolizes the bad side of it. The importance of good and evil residing in peace has been acknowledged in Asian culture. Thus the flowers and the friendly nature of the dragons suggest the acceptance of yin and yang in life. This is one of the most demanded body arts. Women can get this tattooed on their skin as it will look very appealing.

This big three-clawed Chinese dragon body art covers the entire belly of the woman. The fierce look of the dragon is exceptionally sketched onto her body. The serpentine whiskers and hideous horns of the Chinese dragon intimidate the spectator.

The Chinese red dragon design is very popular these days. The Chinese dragon is a celebrated and worshipped deity who protects and watches over mankind. Its power of blessing humans with affluence is what makes it such a great sign for many. The dragon’s image is used in costumes and drawings for the Chinese New Year. It is a good option for both men and women.

This is a tattoo of the head of a red dragon on the back of the shoulder. Its head is lifted upwards. Its hollow eyes and floating whiskers are intriguing. The details on its face are done incredibly.

The meanings behind the head of a dragon can be bifold. The fierce and maleficent dragons’ heads are supposed to be titled downwards, whereas the heads that are lifted towards the sky are of the benign dragons who look at the heavens. This tattoo on the shoulder is of a benevolent dragon. This tattoo can be done anywhere on the body as its meanings are unique and strong.

Dragons are badass creatures that come from the fantasy world and thus are considered magical entities. Dragon images are used in many art forms all around the world. They are in books and movies and series. Dragon tattoos can be based on some of the most popular fictional dragon characters, like those three dragons from Game of Thrones or Haku from Spirited Away. Some further suggestions are here for you.