10 Best Raven Skull Tattoo Ideas You Have To See To Believe! 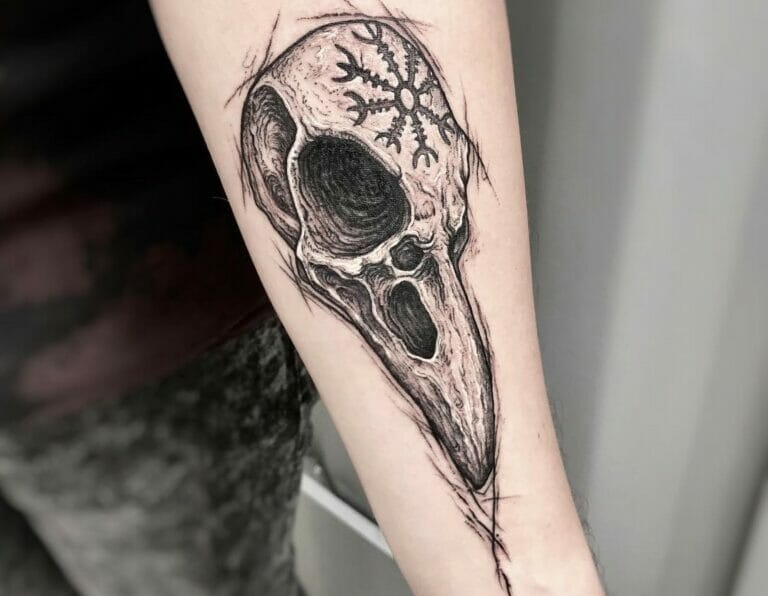 If you’re looking for good raven tattoo designs, then here we have the best raven tattoo ideas for you in the article below.

One of the most popular bird tattoos is raven tattoos and crow tattoos.

Black bird tattoos, like tattoos of crows or raven tattoos, have connections to death. A raven and crow tattoo also has some mythological meanings.

One of the most meaningful blackbirds of the animal kingdom is the raven. Ravens in native American culture represent a trickster and the creator of light, while in Greek mythology, they are considered as a magical creature that has a connection with Apollo, the God of prophecy. There are other stories that other ancient cultures believed like Inuits believed that a raven once tricked a giant sea monster to submit defeat and its body serves to this day on the Alaskan mainland. Check out the images and categories below to find out about raven skull tattoo meaning and skull and raven tattoo meaning.

It is often seen that too complex things tend to become complicated in life. And thus, to find respite from that we often have to revert back to things that are easy and simple. When it comes to choosing tattoo designs, a similar thing is also applicable. Rather than choosing something extremely complex with twisted inner thoughts, it is better to have a tattoo art that is simple yet can represent the meanings and symbols of the tattoo.

In this picture above we can see a very simplistic tattoo description of a raven skull. A deadly dagger has been inscribed inside the bird skull which denotes death, magic, mystery and also symbolize a very unique design. Leaves growing from the bird skull not only is a symbol of life but also something that has a deep meaning. The cycle of life and death is depicted at the same time in a wonderful manner.

Abstract Raven On A Skull Tattoo

People often tend to think abstract ideas and things are vague and therefore hardly pay any importance to them. Abstract tattoo designs and their ideas bind a deeper meaning, powerful secrets of many many ancient cultures together and present it to the modern age. Ravens since the age of time have been a bird of bad omen as they feed in dead bodies. Ravens also have a close relation to Norse mythology including various gods and goddesses. Ravens are not only a symbol of death, but they also strike the fear of ill omen to others.

In the above image, we can see two different tattoos that symbolize spirit animals and different cultures together. On the left side, we can see a goat skull tattoo design and we see a clock above the goat skull and on top of the clock sits a ghost or skeleton of a raven.

Skull tattoos have a dark history and meanings, whether the tattoo is of a human skull or of an animal skull. All skull tattoo designs are heavily associated with death and everything related to it. Ravens are also depicted as dark and symbols related to death in countless books, movies, and shows, like ‘The Raven’ by Edgar Allan Poe.

The picture above is of a dot work tattoo of the combination of two frighteningly beautiful animal skulls and some floral designs. The largest design of the tattoo we can see first is the raven skull. Above the raven skull is a design of beautiful moth that has a design of a skull of a human on the top part of its body. Some pretty floral designs can be seen behind as if the animals are set on top of the flowers. The shading of the tattoo is done in dot work.

Raven skulls have dark but spiritual symbolism. At times, they symbolize the connection or the power of communicating with the other side. The other side means the afterlife. That’s why ravens represent people who have psychic abilities, second sight, mediumship, or prophecy. In addition, skull tattoos also symbolize death and everything related to it. That’s why many people choose to ink raven skull tattoos as symbolic tattoos of death.

The picture above shows a beautiful design of a raven skull tattoo design on the pale skin of the wearer. The shading on the bird skull is done beautifully by black ink dot work. A spider is hanging from the raven skull and there’s a spider web behind the skull. Spider tattoos usually represent harmony, wisdom, balance, and fertility. Other than wisdom or fertility, they also represent death and fear similar to raven skulls.

Raven skull tattoos are not very common and owing to its various symbolism, they can be drawn in many ways. Each of those various designs can be pretty uniquely done depending on what you want to express through your tattoo. You can also add other elements to accentuate the meanings more.

The picture above is of a raven skull that looks like a drawing. The depth of the hollow spaces of the eye sockets and the holes of the noses are drawn so beautifully by the shading work done with black ink. The lines around the bird skull are giving the design a little retro vibe and the Vegvisir symbol on the forehead of the raven skull is making the design quite mystical. The literal meaning of the word Vegvisir is ‘guidepost’, so most people get these tattoos as protection.

Ravens have been used in mythological stories many times, like in Celtic mythologies. Even in Celtic mythology, they represent darkness and death, especially in the case of deaths of warriors. The Celtic war goddess, the Morrigan who was also known as queen of demons or the phantom queen can be seen holding a raven on her hands in all her pictures and she even takes the form of ravens at times.

Cry Of The Black Bird Tattoo

Black birds, mainly ravens have been shown in the TV series, Vikings. The show was made by taking inspiration from Norse mythology and history. In Norse mythologies, ravens have a connection with Odin, a Norse God. The ravens can be a manifestation of the God Odin. The manifestation of Odin, the raven flew around the world. Odin even had two ravens, named Huginn and Muninn who would fly around Midgard and bring Odin information.

The picture above is of a large dot work raven tattoo drawn in black ink on the wearer’s chest. The chest tattoo of the raven is flying with its wings wide open and the design is the underside of the bird. The raven is not a skeleton, but the chest tattoo of the raven has the skull of a human on the middle of its body. If you’re wondering what is the meaning of a raven and skull tattoo, like this tattoo, then that probably lies in their individual meanings. In this tattoo though, it seems that the raven is sucking in the soul of the dead person.

Flower tattoo ideas go well with all kinds of tattoo ideas and that includes any kind of skull designs as well. Flower tattoos can soften a tattoo that is mostly known for its negative meanings. In addition, every flower has its own individual meaning which can increase the meaning of a design. Like, you can include black roses, chrysanthemums to your raven skull tattoo to accentuate the meaning of death. A raven skull rose tattoo can be frighteningly beautiful.

The picture above shows a gorgeous dot work tattoo of a big raven skull. The raven skull is surrounded by some beautiful flowers and some leaves. Only the flowers have some sharing work done in yellow and the shading of the rest of the entire tattoo is done in black ink dot work. The few dots of white ink drawn around the design is giving the tattoo quite a shiny look.

Miniature designs or small designs are very popular choices among people around the world. These tattoos can be cute owing to their small designs, but they also hold all the meanings of a large tattoo. Most small or miniature tattoos that people opt for are very simple outline tattoos of various designs. However, many expert tattoo artists can also do wonderfully detailed shading work in their small tattoos.

The picture above is an intense tattoo of a raven skull done with beautiful detailed shading work done on it. Some flowers and leaves can be seen on the top of the raven skull. The shading work on the eye sockets and holes of the noses are done in criss-cross patterns. The floral designs are surely softening the raven skull tattoo design.

The picture above shows a half sleeve, specifically a forearm mystical tattoo. The tattoo is of a raven skull which has some blue shading work on it. Some blue crystals can be seen behind the bird skull around the top portion of it. Some floral designs with some long leaves can be seen around and two blue-colored tentacles of an octopus. The crystals, the mysterious flowers, and the octopus tentacles are giving the design the much needed magic to make it very mystical.

Now you’ve found out the best raven with skull tattoo, raven on skull tattoo, and rave skull tattoos from the images and categories above. If you’re still looking, then read on –

A Raven skull tattoo was shown in the ‘Expendables’. Wondering about the ‘Expendables meaning’? It’s the name of a movie series. Tattoo of ravens that stand on a skull can be seen worn by a character in the movies.

You can add scenarios of nature in night life and some black feathers of the raven to make the tattoo scarier.

You can opt for a full-body art with the entire back tattooed where the raven skull tattoo can be the centerpiece.