10 Best Rattlesnake Tattoo Ideas You Have To See To Believe! 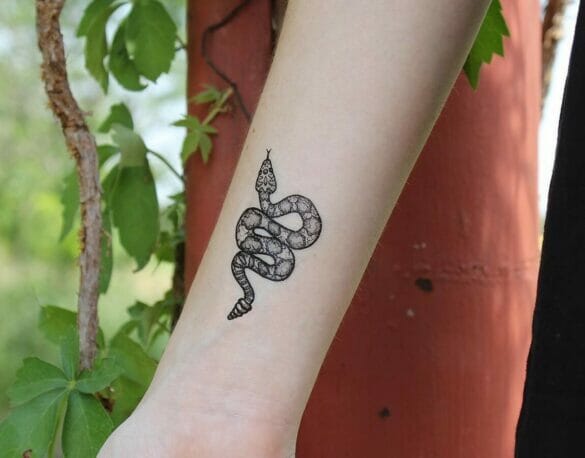 Are you in the search of the perfect tattoo to flaunt in front of the globe? Check out these amazing rattlesnake tattoos and they will surely surprise you!

Rattlesnakes are a group of venomous snakes that belong to the family of Viperidae.

A rattlesnake tattoo meaning essentially refers to death. The venom of this snake is extremely poisonous and can become fatal for anyone.

These snakes are a form of vipers and are known to hunt their prey by hiding themselves in the surroundings. They wait patiently for their prey to become unknown to them and then in an instant they spring and strike. These snakes have a rattle on their tail and make a characteristic sound, thereby earning them their unique name. Be it Japanese snake tattoos or old classic tattoos, snake tattoos represent power, fertility, and rebirth, so read on.

Full arm-length tattoos are very unique and off late they are sought by numerous people all across the world.

Here in the above image, we can clearly see how the tattoo is drawn across both the hands involving the biceps, the shoulder, and the entire forearm. The head and the tail of the rattlesnake belong to the two extremities that are joined in between with numerous flowers that make tattoo designs like these stand out as a symbol of art.

Traditional tattoos are very common in different cultures, so it a not a surprise that these symbols with their unique meanings would not appeal to the public. Though fear of snakes is quite common, at the same time rattlesnake tattoos are also majestic. Many myths have been associated with these snakes and their symbolic meanings. It is interestingly believed that these tattoos are a symbol of immortality, rebirth, and complete transformation, resurrection, or rebirth from death.

As evident from the picture, the tattoo of this deadly serpent looks majestic and has an aura of mystery surrounding it. Intricate and detailed designs can easily fool anyone into thinking that these are real snakes and not a tattoo.

This tattoo is a perfect example of how to use body space. The rattle snake stretches from the forearm to the shoulder with beautiful black rose in the middle representing life and love. A scene of a desert with the sun shining brightly with a cactus plant indicates how life on earth is tough yet the spirit to survive is essential.

The picture denotes the wide-open mouth of the rattlesnake and is revered as a warning sign for others. People often prefer to ink these tattoos to showcase their fearless nature. The lovely watercolour design shows the dangerous fangs of this deadly snake with a slithered tongue. These tattoos also serve as a duality meaning of warning and strength and thus can be an excellent choice for a shoulder or arm tattoo.

Snake tattoos like the one above show a perfect blend of the old with the new. Though it is an old tattoo design it shows the flashy nature of the new age tattoo trends. This brightly coloured tattoo showcases the snake’s phallic shape and is a lovely choice for full-body tattoo art. The squared spots of the snake are wonderfully detailed and intricate and bring out the realistic design of the tattoo.

In the above picture, we can see a wonderful, detailed, and intricate design of a rattlesnake that has been beautifully inked on the sleeve of a person. The preferred choice of colour of the tattoo also blends into the background of the habitat in which the snake lives and how it completely blends itself into the surroundings. The detailed artwork of the scales is extremely prominent and thus effectively makes it a highly realistic tattoo. These tattoos are not only realistic but are also tattoos that symbolize strength.

In this image, we can see that a beautiful simplistic tattoo design of a rattlesnake enclosed by a rose twig. This tattoo also depicts the camouflaging nature of these snakes. Unknown to others, these snakes strike at the speed of lightning without making any sound. Thus, the rattlesnake tattoo meaning death is usually denoted by this fact. If you plan on having tattoos that are simple yet majestic, opt for these ideas as mentioned above.

These are the perfect choices for a rattlesnake sleeve tattoo that you can ink on your arm. The tattoo shows a realistic face of a native American woman followed by her sitting on a log of wood. Just underneath the wood descends the venomous rattlesnake. Though this is a black and white tattoo it looks as beautiful and majestic as that of a coloured tattoo.

In the above picture, we can see the venomous rattlesnake hiding behind two beautiful roses. And just below that, we can see the snake dropping its venom on the roses. Rose is defined as the flower of love and the snake is poisoning the flower. In today’s world, we often notice, with something as pure as love, negativity in terms of hate, pride, greed often comes as an accompaniment and this tattoo is an ideal representation of the same.

Here we can see a lovely coloured tattoo of a rattlesnake tattoo. The colour work is amazing. The snake is also seen to circle a boot. This is a perfect piece for you if you are a fan of bright tattoos.

Tattoo designs provide a wonderful way to express something or to define stories that one has been longing to tell. So apart from the choices mentioned above, you can also opt for normal snake tattoos, their various meanings, snake skull tattoos, scenario tattoo