10 Best Rainbow Bridge Tattoo Ideas That Will Blow Your Mind! 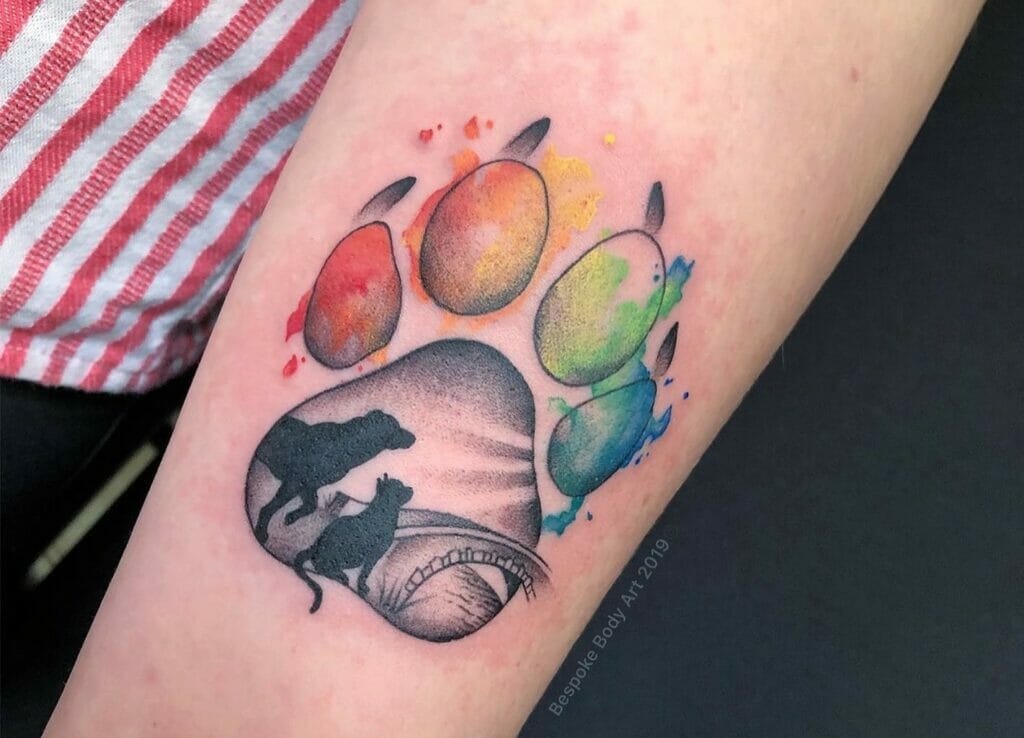 Rainbow bridge tattoos have a different meaning for the person bearing the tattoo.

The rainbow bridge stands for the amount of love one has for their beloved pet. It is a symbol that even after their death, one remembers him or her and will one day meet at the rainbow bridge when both their lives are over.

It is a popular belief that the rainbow bridge is a mythical overpass that connects heaven and earth. It is a place where people reunite with their dearly departed pets. It is believed that the animals, along with the humans, cross the bridge into heaven, and they will never have to part ways again. Do not forget to check out these amazing tattoo ideas of the rainbow bridge that will blow your mind!

The Pawprints And The Rainbow Bridge Tattoo

In the middle of the tattoo, there is written: “I’ll meet you at the bridge,” which indicates that this tattoo is a symbol of the immense love of a person for his or her pet. This tattoo is a great piece of work, and this would look amazing on the lower part of the arm.

This rainbow bridge tattoo design has two pawprints. One is of dark purple and the other one of mostly blue color, but there is a slight touch of purple too. There is a rainbow bridge that has passed through the center of the pawprints in a zigzag manner, and around that, there is a tinge of a lot of colors. There are spots of blue, green, and violet color. These colors are used in the painting in such a way that it looks like people were playing with these colors.

A person makes a rainbow bridge tattoo as a promise to their beloved pet that they will meet when both their lives are about to perish. They will meet at the rainbow bridge. This piece of body art will look great on the back of the body or the chest area.

The Rainbow Bridge And The Garden In Heaven Tattoo

This rainbow tattoo is a sweet and hearty tattoo. This tattoo depicts a whole scenery. In this tattoo, there is a girl running toward her pets on the rainbow bridge. This tattoo has two different places on each side, and the rainbow bridge connects them. The girl is running from one side to the other. There are four dogs running toward her. Two are in the middle of the bridge, and the other two are on the other end of the bridge.

The human figure and the dog figures are made in dark purple ink. On the right side of this tattoo is a tree, and the land is filled with grass and a lot of flowers. There are birds flying in the sky. The birds are made in black ink. The silhouettes of those birds are made in this tattoo, and the sky looks so jolly with light blue clouds that it makes our hearts melt. This is a perfect tattoo for the arm region.

The Heart And The Rainbow Bridge Tattoo

It isn’t a rainbow bridge tattoo per se, but it uses the elements of a rainbow bridge. This tattoo has a lot of flowers in it. There are two types of flowers in this tattoo. One type of flower has a light pink color, and the other type has a dark purple color. There are two types of leaves as well along with the flowers. This tattoo has a lot of crystals in it. These crystals contain all the colors of the rainbow. The crystals emerge from a specific point, which is the center of this tattoo.

In the center of this tattoo is a heart from where all the rainbow-colored crystals emerge. Inside the heart is another heart, and within that is a paw print of a pet. This tattoo is a perfect choice for the lower part of the arm.

The Stairs And The Rainbow Bridge Tattoo

On the right side of the tattoo is the extended side of the rainbow, along with many clouds. The rainbow bridge is actually made of mushrooms, and there is a mushroom beside the green plant as well. In the background, there is a red-colored sky which makes the tattoo look very beautiful. This tattoo will look very good on the wrist area or the lower portion of the arm.

The White Rose And The Rainbow Bridge Tattoo

This rainbow bridge tattoo has a lot of stairs, and in the middle of the stairs, there is the rainbow that is following the way of the stairs through its center. There are four pawprints of black color on the stairs. This represents that the pet has already passed the rainbow bridge and reached heaven. The paw prints look very prominent in this tattoo owing to the black ink.

On both sides of the stairs, in this tattoo, there are shrubs of green color, and there are some flowers as well in the shrubs. The flowers are of pink color, and the shrubs give this tattoo a whole different vibe. In front of the stairs, there lies a white colored rose. White roses are symbolic of friendship, and pets are meant to be confidants of people. This tattoo is a great choice for the arm’s upper part or the shoulder’s back.

Rainbow Bridge And The Stream Tattoo

This rainbow bridge tattoo looks very sweet on the skin. There is a bridge rainbow made in this tattoo, and on one side of the bridge is a paw print inked in black. There are wooden handles made on both the edges of the bridge, and this gives a very sweet vibe to this tattoo.

The flowers of this tattoo are of different colors like orange, yellow, blue, and purple. There is another dog and a squirrel as well in this tattoo. This tattoo covers up the whole arm. This tattoo is a worthy choice for a sleeve tattoo.

The Butterfly And The Rainbow Bridge Tattoo

This rainbow bridge tattoo has a butterfly, two paw prints, and a cloud. The rainbow is emerging from the cloud, and the butterfly is guiding the way of the rainbow. The cloud has a reddish pink tinge, and there are stars of violet color. One end of this rainbow has the butterfly and the other end has the small cute cloud. This tattoo would look beautiful on the wrist area or toes.

Pets form a very important connection with one’s life. Pets are often people’s inspiration. For many, their pets are their best friends and comfort place. People find comfort in their pets. They often confide in their pets about all the secrets they cannot share with the outer world. When one loses his or her pet, it is heartbreaking. It is like losing a family member; it is believed that people can meet their pets after crossing the rainbow bridge. There are other kinds of rainbow tattoos that you should definitely check out:

Still looking for inspiration, then checkout this blog post about Dog Paw Tattoo.