10 Best Queen Chess Piece Tattoo Ideas You Have To See To Believe! 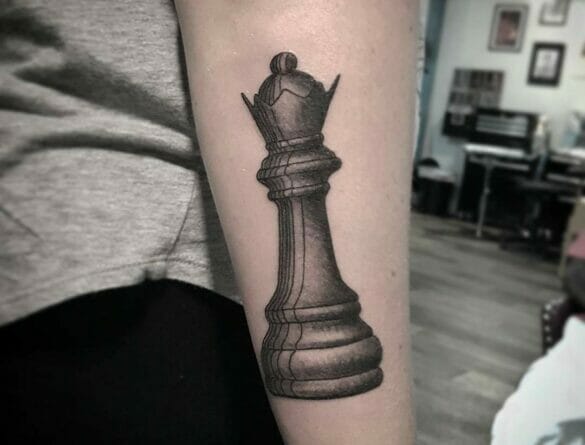 Looking to channelize your inner Queen through body art? Check out this list of queen chess piece tattoos specially curated for chess lovers!

The game of chess is as ancient as time itself!

So if you’re looking for tattoo ideas that are classic but cool, exploring queen chess piece tattoos may be a good idea. Queen piece tattoos have always been in fashion but the success of the Netflix drama, “The Queen’s Gambit” has made chess tattoo ideas all the more popular!

The game of chess is known to have originated in Eastern India as a game indulged by Royals and nobles alike to practice their military skills of the battery field. It was referred to as “Chaturanga” marking the four divisions of the military.

From India, this game of skills travelled further through the Silk Road to Sassanid Persia where the name “Chatrang” and later came to be referred to as “Shatranj”. Throughout history, this fascinating and ancient game of shrewdness and skills has been played in many parts of the world!

A chessboard has various chess pieces with the most powerful of them being the king and the Queen for obvious reasons. The different pieces being the king, queen, pawn, bishop, rook and Knight represent the different military divisions of an army. The pawn is the weakest player on board and is often the first piece to be martyred. Apart from the king tattoo and the queen tattoo you can always explore the bishop tattoo, the pawn tattoo, the knight tattoo or the rook piece tattoo, depending upon the meaning each chess piece imparts to the game of life!

The inner world of chess is extremely fascinating! Full of betrayals and drama, it can prove to be quite entertaining for those who are passionate about the game.

This queen piece tattoo hits home for any close female relationship be it your best friend or lover! In the modern world where the idea and practice of feminism are extremely popular, this tattoo fits right in. Replacing the traditional king and queen pieces this tattoo represents female leadership as a power couple! The tattoos are identical and monochromatic. The shading on the tattoo is impeccable and the central jewelled crown on the queen piece adds just the right amount of drama to this amazing queen couple tattoo idea!

This petite queen piece is grace redefined! The simplistic design can be recreated by any tattoo artist successfully for the queens who take charge of their own world! The black outline is dark and bold while the shading in the body of the piece is minimal. Just like the queen pushes her pieces around for ultimate victory, a strong woman with this tattoo is sure to make a style statement worth remembering!

This intense chess tattoo isn’t for everyone but if you are a true queen you won’t shy away from it. The crooked edges resembling thunder adds an edgy and sister look to this tattoo which can be flaunted as a symbol of how strong women are sometimes demonised as evil witches. This tattoo takes a stand against this outdated thought process in an artistic way!

This chess tattoo is a work of genius and truly one of a kind. This is one of those chess tattoos that have a deep meaning behind it if one has the eye for it and could be an epic conversation starter! There are many chess piece tattoos available as one can see in the above post. What is unique about this design is that it shows the transition of a chess tattoo from pawn to the queen which is a journey undertaking by any powerful female figure in our lives. The concept of the reflection of the pawn in the mirror being shown as a queen sends a powerful message. The idea comes from a pawn being sacrificial souls in the game of chess becoming the pawn queen by managing to reach the other side of the board unscathed by overcoming all the attacks it faces on the way!

This tattoo is perfect for a person who has an affinity for anything victorian and classic! This chess tattoo almost looks enchanted, straight out of a fairy tale. The combination of royal blue and gold makes this chess tattoo design truly regal and eye-catching!

This simple and understated tattoo is for a person who wants a powerful piece tattooed with a twist! The gaps in the structure of this beautiful piece add a charm that is unique. Make sure you get a tattoo artist of a patient nature to create this piece of art for you!

This tattoo is different from the grey realism of most chess tattoos available for reference on the internet. The pop of red colour from the rose is a stark contrast to the black and grey tones of the queen chess piece and gives it a powerful look!

This tattoo stands out amongst all the pieces of designs simply because it features Anya Taylor Joy holding a queen chess piece. It is sure to be a huge hit with her fans! The tattoo has an uncanny resemblance to her face with some pro shading work and the crimson butterflies add a fiery effect to this powerful piece.

If your hunt for the perfect queen chess piece tattoo isn’t over yet, have a look at the following options below: