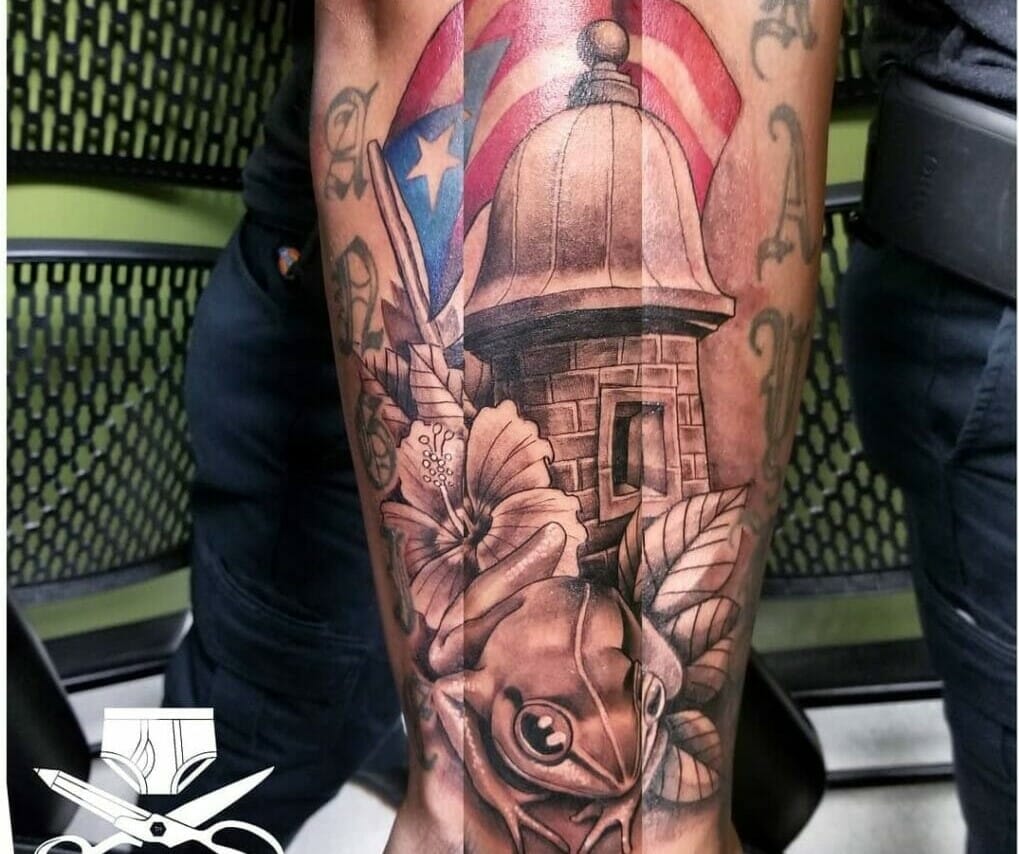 A treat for the creative mind and a sense of pride for the beholder. Check out the best Puerto Rican Flag tattoo ideas available on the internet.

Dubbed as the ‘Rich Port’, the history of Puerto Rico adds a fair bit of sarcasm to the commonly used adjective ‘Small Island’.

Puerto Rico is the home of the rich culture imbibed by the Taino Tribe, which was claimed by Christopher Columbus in 1493. Deriving a rebellious history due to the subsequent invasions from Europe, Puerto Rico also became the home to many heroics.

Doused in the color of vigor, purity, and freedom, the Puerto Rican Flag is a symbol of a versatile history. Even after repeated invasions and corresponding influence from the different ruling parties, Puerto Rico’s history and culture remain intact. The Caribbean pride highlights the heroic stories of great resistance while retaining its culture.

A tattoo that screams out leadership, with an observative personality. The striking gaze of the tribe chief, which is further highlighted by the exquisite skills of the tattoo artist, is a show stopper, yet it’s not. Highlighting the skill of the professional artist, Taino symbols are also added to the mix, linking it to their rich culture. While some might say that such kinds of tattoo designs highlight an artistic and peaceful personality, the roaring tiger on the forearm symbolizes danger. One can also replace the roaring tiger with two tribal weapons, which might work as well.

A dramatic representation of the Puerto Rican flag engulfed in white flames, highlighting culture retention and hard work. Certainly a treat for the creative minds and a thought process for the observers of this unique piece of art, which is otherwise called the Puerto Rican Flag.

A full-forearm tattoo itself shows the unparalleled capacity of its owner to withstand pain. These flames originate near the source; hence these types of Puerto Rican tattoo ideas also reveal the close affinity of the bearer to his roots. Certainly, the blue ink inspiration has carried on its legacy of creativity, and such an individual can be touted as the white flames of many original Puerto Rico tattoo ideas that you may come up with.

The Puerto Rican flag, along with its several elements, has all the necessary ingredients to suffice your creative mind, thus allowing the creation of several Puerto Rican Taino tattoo designs. Going freestyle, each element has its own meaning, which further cements the fact that every Puerto Rican tattoo will have a unique connotation. However, only the best tattoo studios can aid you in this creative escapade.

Like a rose tattoo or the flower itself, the hibiscus has often been considered a victim of several interpretations. However, for black and white Puerto Rican tattoos such as these, the terms ‘Love’ and ‘Passion’ is usually associated. For a proud and learned Puerto Rican, a floral tattoo with the national flag can be considered a great option.

We all have been guilty of mistaking the Puerto Rican flag tattoo designs with an American flag tattoo. However, nothing relates more to the history of the island present on the Caribbean sea than the Statue of Liberty. With a string of invasions, the Puerto Rican land has a tomb for several brave hearts. Unlike many countries with the same fate, Puerto Rican culture has been well preserved and shared, Feats worthy of the famous statue itself.

With several elements, an eye-catchy blue triangle coupled with a Taino symbol, one can see the presence of several individual Puerto Rican tattoo ideas in every tattoo studio spread across San Juan. Even with such interpretations, many observers fail to determine the real meaning of the Puerto Rican flag. Since the blue ink inspiration has a very high affinity towards the Statue of Liberty, adding these two in one frame will save the curious observers from a thought process.

A treat for tattoo lovers, scared of full body art or a great half-sleeve tattoo. The tiny Puerto Rico tattoo is for the ones who like to keep things simple and clean. Even though the small Puerto Rican Flag tattoo is common, the addition of some mini Taino tribal tattoos near the blue ink inspiration might help one stand out in the crowd.

Maintaining delicate details while inking down a miniature version of an element is considered a great feat. Such a mini tattoo beautifully highlights the skill of a tattoo studio while also portraying a keen eye for finer details within the bearer of this cool tattoo. Certain aspects like elements, placement, and size give out a different meaning, and for articulately inked designs such as these, the message of perfection is heard, loud and clear.

When the term ‘Blue ink inspiration’ is taken very seriously by a Mickey mouse lover, a sarcastic art with great meaning is born. Puerto Ricans have had their fair share of trials and tribulations in the past, yet this country is shrouded with sunny personalities. The phrase ‘The happiest people often have the toughest history’ is personified through this Rican flag tattoo in a rather cheeky way.

A great choice of sleeve tattoo for a person who shares the same history as the famed country itself. While highlighting the past struggles, it portrays a positive and outgoing character with the inclusion of Mickey mouse in such Puerto Rico designs. Such a person can be considered to have the mark of a true Blue ink inspiration while being the pride of the Puerto Rican ancestors.

A full-shoulder Puerto Rican flag, in the words of the best tattoo studio in San Juan, is called a canvas. Often accompanied by excruciating pain for a prolonged period, such body arts are destined to get the most attention. Apart from the Rican flag, these tattoos follow the inclusion of some Puerto Rico Taino symbols, which makes them more appealing.

While planning such a tattoo, one has several options, like the addition of small Taino Tribal tattoos, a tattoo of the powerful sun god, along with the Rican flag. Many tattoos such as these have different meanings, something that depends on the bearer.

An incomplete Rican flag, only suitable for the boldly imperfect Puerto Ricans out there. The calculated gaps in the Puerto Rican flag with subtle fade highlights portray both perfection and imperfection in a person bearing the ink of such a Rican flag tattoo.

In the rat race of perfection, there are only a few people in the crowd who can proudly wear their vulnerability. In such a sense, the Rican flag might be more relatable to such a character due to their humble portrayal in the beginning, while being able to stand their ground even when they faced the biggest hurdles.

Indicative body art can be considered a suitable pick for a visionary who is destined for greatness. Such Puerto Rico designs can also be termed as the ink of hope that might help one by adding that last straw of faith to overcome any difficult situation.

As a lifelong ink partner, nothing qualifies more than these Puerto Rican tattoos. As Taino Tribal tattoos incorporate every component of Puerto Rico’s history, creative minds will face a certain challenge they love. Adding some of the best Taino tribal tattoos with the blue ink inspiration, there is no limit to the creation of new Puerto Rican tattoos while adding the Rican Flag itself into amazing future body art.