10 Best Psalm 23 Tattoo Designs That Will Blow Your Mind! 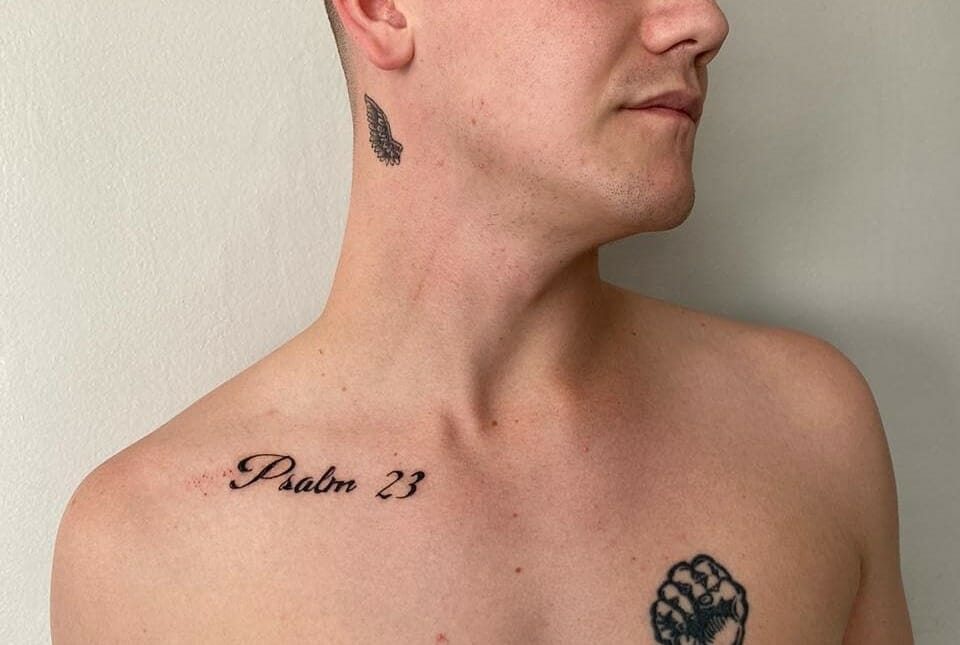 If you are an ardent follower of Christianity and like Bible verses then one of the best tattoo ideas is the psalm 23 tattoo.

Psalms are a collection of hymns that comprise the Book of the Bible.

Originally written in Hebrew, the Bible was translated into English in the 17th century under the rule of King James VI and was known as the King James version. Psalm 23 among all others is one of the most popular scriptures in this version.

In Latin, it begins with ‘Dominus reget me’ whereas in the King James version ‘The Lord is my Shepherd.’ An anonymous speaker in this poem is delighted with how God as a shepherd protects his followers from any evil and also provides them with plenty in their time of need. The main concept of this psalm is that we must not lose faith in God. For such deep meanings, this scripture has been used in tattoos by many people.

Also known as the shepherd’s psalm the simple psalm 23 tattoo is a very famous choice among scripture tattoos. In this Bible verse, the Lord is compared to a shepherd which was quite common in Israel and Mesopotamia in ancient times. As the shepherd leads its herd safely to its destination protecting from predators similarly the Lord will protect its faithful followers and lead them.

These psalm tattoos are mostly done with black ink and can range from medium to large. The best place of choice to put these tattoos are on the forearm, bicep, chest, wrist, sheen, and back. The tattoo design can be either done by writing the number twenty-three along with the psalm or a few lines can be etched with the number.

The human forearm is one of the most visible parts of the body and to decide to do a tattoo here reflects the honesty and confidence of the tattooer. When a psalm 23 tattoo is done on the forearm the first meaning it will deliver is that the tattooer is a devout Christian follower and is proud of it. The ink used for doing this tattoo can be black or any other color preferred by the tattooer.

Ranging from small to medium sizes they are both popular among men and women. Multiple variations can be used for doing this bible verse design on the forearm. They can be fused with other objects like a cross, a quote, or a chalice. A particular line can be highlighted while inking this tattoo on the skin. Last but not least though it is one of the most popular areas to get tattooed but due to the presence of radial nerves it can be very painful at times.

Many a time you will find that people who have etched the psalm 23 tattoo done it as 23:4. Now this means they want to particularly highlight line number four which talks about the valley of the shadow of death. This tattoo design is mostly done using black ink and can be fused with other objects like a cross, christ, folding hands, and such.

The tattooer with this line wants to represent that though there are many evils in life who want you to fail you must trust the Lord as our shepherd who will guide you to take control of your life. The perfect place for this psalm 23 tattoo is the sheen, chest, rib, ankle, thigh, calves, forearm, and back.

Often it is noticed that people have quotes tattooed on their bodies. The quote can range from movies to proverbs that are close to the tattooer’s heart. Religious people often get quotes from the Bible and get inked with Bible verses tattoo. Among them, Psalm 23 is one of the most popular choices both among men and women.

These Bible verse tattoos can range from small to large depending on the number of lines the tattooer want as a quote. The best place to put the psalm 23 tattoo design is on the forearm, wrist, ankle, thighs, chest, back, and bicep. The Bible verse tattoos show the strong faith one has in Christianity and the enormous power and motivation it gives them to move forward in life.

Jesus was crucified on the cross and had to bear the pain in order to save humanity. When a psalm 23 tattoo is fused with the cross sign first it reflects the concept of unconditional love and sacrifices just like Jesus Christ. Black ink is mostly used for this psalm tattoo and is both popular among men and women.

Choosing a place to put the cross psalm 23 tattoo design depends on the size and pattern of the tattoo. If a small cross is done along with psalm 23 then the ideal location to put them would be on the wrist, ankle, finger, neck, and forearm. A medium to large tattoo design is best suited to the back, thighs, chest, and sheen of the tattooer. Some people even do these tattoos in memory of their loved one who has passed away.

People who are shy or mysterious and do not want to flaunt off their tattoos like others mostly get inked on their feet. Adding a psalm 23 design on the feet shows that though they are proud of their faith but do not wants everyone to know about it. Sometimes it can be seen that they are often fused with a cross, a crown, or a quote.

The tattoo is mostly done in black ink and is popular among men. Feet are something that is used for standing up and moving from one place to another. Doing a psalm 23 tattoo on the feet can also reflect the belief of the tattooer that the Lord will help them to rise in the time of need and just like the shepherd will guide them to their destiny.

Be it in Roman or in Arabic numerals psalm 23 tattoo with numbers mostly signifies important dates. The usage of black ink is mostly common for this kind of tattoo and the best place to put them is on the forearm, chest, bicep, wrist, and back. Several other elements like a baby foot, a ring, or a cross can be added according to the need of the tattooer.

When a baby’s foot is done with a psalm 23 tattoo along with a date it represents the day of birth of that child, a ring reflects the marriage date and a cross can represent someone’s date of death. Adding these bible verse tattoos shows the tattooers’ faith in the Lord and their strong belief that the Lord is the controller of everyone’s destiny.

A shin is a great place to do the psalm 23 tattoo and can look magnificent. You can either do this tattoo on a single shin bone or can use both the shin bones to make it more majestic. Black ink is mostly used for these tattoos and the size can range from medium to large.

Doing a psalm 23 tattoo on the shin reflects the tattooer’s belief in the Lord that he will guide them in all walks of life and will provide plenty in time of need. It hurts quite a lot when tattooing on the shin so it can also act as a test of faith for the tattooer.

If you go through psalm 23 the Lord is referred to as the shepherd and mostly this is the imagery maintained in the whole psalm. Though one might find this trivial yet it has deep meanings. Similarly, the small tattoos may be short in stature but they speak volumes about the tattooer’s personality.

Here mankind is compared with flocks of sheep and the Lord as a shepherd will pave them the way through the valley of the shadow of death which is life itself. And if you have faith in the Lord he will provide you with food and shelter too. The small tattoos are mostly done with black ink and as it takes very less space they can be inked in delicate areas too.

The sleeve psalm 23 tattoos are most famous as the Bible verse tattoos for men. They can be either done as full sleeves or as half sleeve tattoos and always tell a beautiful story. They are mostly large in nature and are done with traditional black ink. Only an able tattoo artist with experience can work on these pieces for days.

The whole psalm 23 verse is narrated through these tattoo ideas and can either be done with imagery or by writing the whole verse on the arm. Some people also can pick particular lines and fuse them with imagery for this sleeve tattoo design. The concept of independence and faith is articulated with this sleeve psalm 23 tattoo.

Not only in Christianity but the psalm 23 verses are also sung in the Judaic faith in their third Shabbat meal and in funeral services. Orthodox Christians have been using this psalm on the receiving day of the Eucharist and in many Churches, psalm 23 is still used while giving sermons by the priest.

The other psalm 23 tattoo designs that can be done are: