10 Best Prince Tattoo Ideas You Have To See To Believe! 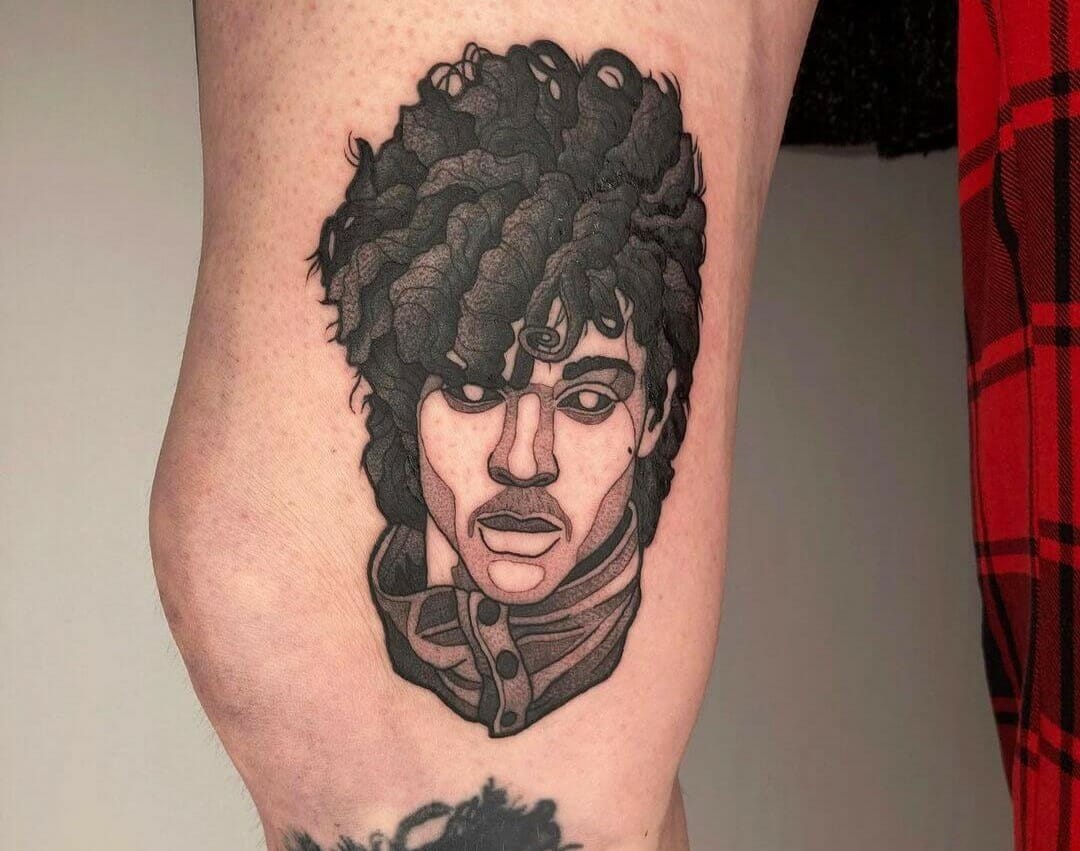 Are you looking for the perfect tattoo to display your love for the American singer Prince? Then here are some amazing Prince Tattoo ideas that you can check out!

Prince Rogers Nelson was an American singer and songwriter who was born in 1958 and passed away in 2016.

Known for being one of the main proponents of the Minneapolis Sound subgenre of music, Prince had released 39 albums in his entire music career. His music was a vast amalgamation of different musical genres like funk, soul, synth-pop, jazz, R&B, pop and hip-hop.

In 1993, Prince changed his name to a symbol that could not be spelt out. However, his fans started to refer to the symbol as the ‘Love Symbol’. After that, Prince was noted as ‘The Artist’ or ‘The Artist Formerly Known As Prince’. Prince was noted for his stage performances which were packed with power and grace. He was also known all around the world for his energetic dances on stage and how he would be playing his guitar and jumping around. His voice was also considered to be quite unique as he could easily reach high-pitched notes in his songs.

The most successful and well-known album of Prince happens to be ‘Purple Rain’ which was released in 1984 along with his band The Revolution. Along with the album, Prince also released a movie named ‘Purple Rain’ which consisted of various music videos from his concerts. The movie also won the Academy Award for Best Original Score. Prince would forever be remembered by fans all around the world not just for his music but also for his flamboyant personality that shone through his performances. He would often wear makeup and wear androgynous clothes that defied the norms of masculinity. Many of the more popular pop stars and musicians right now also consider Prince to be their major influence.

Unique Tattoo Ideas Of Prince The Musician For Fans

Fans of the American musician Prince have always found different ways to honour him and always keep him in their memory. While some have bought all of Prince’s albums to keep in their collection, others have gotten tattoos of the artist on their body to forever carry a piece of the legendary man with them. If you are looking for a wonderful tattoo idea of Prince, then you might want to check out the picture above. Here, the wearer has gotten a small but elegant Prince tattoo with just the outline of one side of his face neatly drawn. This minimal but lovely tattoo will look great even from a distance.

Vibrant And Colourful Prince Tattoos Of The Famous Musician

Anybody who is a fan of Prince and has followed his career will know how cool he really was in real life and in reel life. He was definitely not a fan of monochromatic songs or a lifeless, dull stage presence. In all his performances, he would infuse life and energy in order to give the audience a show of a lifetime. Thus, if you think you can tolerate the pain and have a large enough budget, you should definitely ask for a colourful Prince tattoo. It might be time-consuming but it will also look really amazing and it will be a wonderful way to honour the late artist and pay him a lovely tribute. In addition to that, you should definitely ask your tattoo artist to use purple coloured ink since that is a colour that will forever be associated with him due to his affinity for it.

If you are on the search for more amazing tattoo ideas that will reflect your love for music or musicians, check out these amazing Music tattoo ideas.

The Prince symbol tattoo meaning is quite legendary and the story lies behind Prince leaving his name is quite legendary. In 1993, he got into a dispute with Warner Bros. Studios regarding the name and in order to get out of the conflict, he simply detached himself from his stage name and adopted a really cool symbol. A lot of fans who knew the story started to call it the ‘Love Symbol’. The symbol then became iconic due to Prince’s association with it. Consequently, if you are looking for a tiny and sweet musical tattoo and want it to look simple and minimal, you should get the Love Symbol tattooed on your body.

If you have been inspired by the album ‘Purple Rain’ and really like Prince and the music he makes, then you may want to get a tattoo of him as well. If you are out of ideas about the perfect Prince tattoo, then you may want to check out the picture above. Here, the wearer has gotten a traditional portrait tattoo of the ‘Purple Rain’ singer. If you also want a portrait tattoo, you have to ensure that you approach an expert tattoo artist who can get the contours of the face correctly.

‘Purple Rain’ was Prince’s sixth studio album for which he also won two Grammy awards and an Academy award. This album was his first album to reach the Billboard Top 100 and it stayed there for six months consecutively. The lead singles from the album included ‘When Doves Cry’ and ‘Let’s Go Crazy’. Many critics noted the innovation and experimentation in genres in these songs, especially in ‘When Doves Cry’. This was also one of Prince’s more sexually explicit albums with the music video for ‘Darling Nikki’ being noted by many as too sexually suggestive for consumption for children. This album and its singles like ‘When Doves Cry’ has only become more popular over time. Rolling Stones has even added it to the eighth position in their list of the ‘500 Greatest Albums of All Time’.

Therefore, if you were particularly inspired by this amazing album, you should definitely get a tattoo based on the songs. In addition to that, you can also add tattoos of doves signifying the doves named in ‘When Doves Cry’. You can also add lyrics from some of the songs in the album which you really liked a lot. A ‘Purple Rain’ tattoo will definitely get you noticed by other Prince fans and it will also stand out in a room. It will also be a wonderful way to honour and pay tribute to this timeless artist who happened to be one of the best in his generation.

If you are looking for more inspiration about a pop star and their awesome music album, you should definitely check out these stunning Born This Way tattoo designs that would encourage you to live your life how you want to just as Lady Gaga sang it.

A lot of art about Prince has also included the iconic Prince Symbol. Over time, many artists have also included Prince’s eye into the symbol to make it look even more amazing. Thus, if you want to get the Love Symbol tattoo with an awesome twist, you should draw some inspiration from the picture above.

Not many people are fans of big, complex, elaborate and intricate tattoo designs that cover up a large part of our bodies. If you are one of them but want a really awesome musical tattoo anyway, you should try and get the Prince symbol tattoo. The Love Symbol can be quite tiny and fit on your wrist if you want. This would also be a perfect tattoo idea for fans of Prince to honour him and pay him a fitting tribute.

A lot of people prefer to get tattoos on their arms because it offers the most visibility. Lower arm tattoos are quite difficult to hide even with clothing and it definitely catches other people’s eyes. Consequently, if you are a budding musician and want to let people know about your love for music, you should also look at awesome musical tattoos for your arm. One such tattoo idea would be to get a Prince tattoo. As seen in the picture, the wearer has gotten a bright and colourful Prince’s Love Symbol tattooed on their arm. Although the tattoo artist has not used very dark or neon colours, the soft pastel shades of the tattoo are standing out nonetheless.

If you want to honour Prince through your tattoo but do not want to get a boring, dull design – then you can experiment a little with your tattoo design as well. As can be seen in the picture, the wearer has gotten creative with the imagery of Prince and every flamboyant aspect of him. Then they have added those features to a cute frog riding a bicycle! This idea is really unconventional but it is also funny and quirky. If you also want a similarly adorable and bizarre tattoo idea, then you should go ahead and ask your tattoo artist to create a fun design.

Different people have different preferences about their tattoos when compared to each other. Some may like conventional tattoos while some may attempt to get more classic tattoos which are not rare but look amazing anyway. If you want your tattoo to be complex and intricate, then you should ask for a detailed and nuanced Prince tattoo. You can also ask the tattoo artist to fill it all in with black ink as can be seen in the picture. When speaking of Prince tattoos, you can also add the Little Prince tattoo or a Prince Crown tattoo or even a Prince of Persia tattoo if you want.

Most people nowadays prefer to get tattoos through which they can express their interests or different things that they love. Therefore, they may get tattoos inspired by literature or their favourite movies that they have seen in the past and find really cool. It may also be a particularly encouraging and inspiring quotation that they feel has had a lot of impact on their life. Consequently, you can also decide to get a meaningful, personal tattoo like that if you wish to. If you think any of Prince’s songs or albums or the person himself has made you happy on dark, gloomy days – then you should think about getting a tattoo based on the famous musician. Not only would this be a wonderful way to pay tribute to them, it would also be a nice way to keep Prince and his awesome songs in your heart and memory always.

10 Best Silhouette Tattoo Ideas You Have To...

10 Best Side Tattoo Ideas You Have To...

10 Best Side Boob Tattoo Ideas You Have...

10 Best Sibling Tattoo Ideas You Have To...

10 Best Seal Tattoo Ideas You Have To...

10 Best Scarab Tattoo Ideas You Have To...

10 Best Planet Tattoo Ideas You Have To...

10 Best Undertale Tattoo Ideas You Have To...