10 Best Predator Tattoo Ideas You Have To See To Believe! 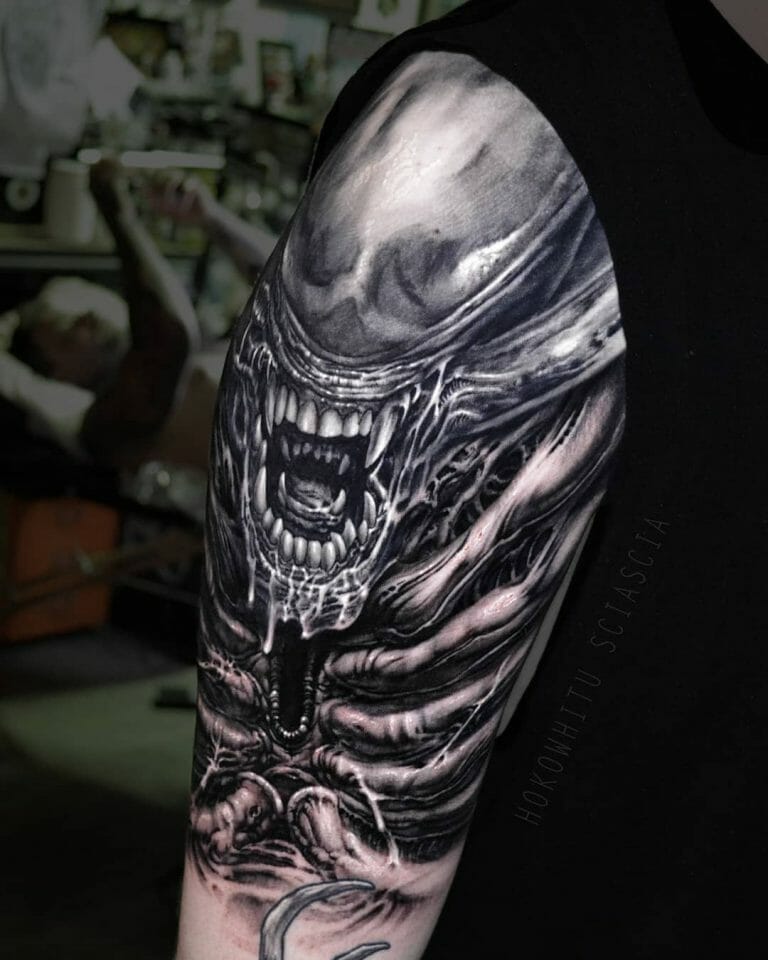 If you’re looking to flaunt your love for the classic movie franchise by getting a Predator tattoo, sit back and let us show you the best choices out there!

It is surely one of the most iconic movie franchises of all time.

First released in 1987, Predator kicked off an explosive franchise that has since spawned 4 movies, comic books, novels, video games, and board games that allowed it to build a wide audience. Predator movie series has delivered timeless classics that have interested people of all age groups.

The franchise focuses on conflicts between men and the alien species called Predators. Arnold Schwarzenegger’s role of Major “Dutch”, a cigar-smoking, muscle-flexing war veteran has found itself many fans over the years. Predator and Xenomorph from the series Alien are considered the most iconic extraterrestrial characters and their popularity speak for themselves. The merging of the movie business franchises Alien and Predator happened in 2004, giving rise to the Alien vs Predator series. The movies hold a legendary status in the Hollywood film industry. Tattoo artists all over the world have at least once got a client who wants Predator tattoos. Internet is filled with such ideas for Predator tattoo designs. If you are in the quest for finding a perfect Alien vs Predator designs of tattoos, you have come to the right place. This site is aimed to provide information about tattoo ideas and predator tattoo pictures that will leave you spoilt for choices.

Starting off with this black and white piece, which is one of our favourite Predator tattoos in this list. The biceps provide the area for a super clean closeup of the Predator, and below the character gives a power pose and looks dead serious with a killer glint in its eye, inked in red that provides a perfect color contrast. We can also find the Predator symbol drawn in red, making it a perfect cinematic Predator symbol tattoo. The expert shading makes the textures very photo realistic. Kudos to the artist hailing from Eastern Europe who executed this fantastic Predator tattoo. This particular design is perfect for muscular men who are looking for Predator tattoos.

Monsters are an important part of any folklore, and this particular design shows the Predator in classic red and green color scheme of Japanese tribal art. The tattoo is fairly small but the artist manages to give it genuine look. The expression of the Predator is menacing and links to the “GET TO THE CHOPPER” scene from the first movie. This does offer a chance to use this tattoo as a conversation starter for anyone. A perfect Predator tribal tattoo for men who want tattoos that offer out of the box ideas.

The Tarot Card Tattoos of Xenomorph and Predator

For anyone who isn’t aware of what tarot cards are- they are French playing cards that are also used by people to get insights into the past or future. You can find more information about tarot cards on various sites. This UK based tattoo shop has envisioned their idea of tarot cards for Predator and Xenomorph, labelling them as Hunter and Monster. Such innovative ideas that maintain relevancy to the original idea help tattoo shops to grow their business and get more clients. It also shows the tattoo culture of the country and we are sure England is home to amazing tattoo companies. Tattoos are unique body accessories and our site definitely recommends this Predator tattoo for anyone looking for a small tattoo of Alien vs Predator characters.

The Tattoo Of Arnold Smoking A Cigar

Major Dutch’s cigar smoking scenes have their own cult following. This popularity of Schwarzenegger makes it a must see design in our list of designs of Predator tattoos. Arnold is definitely one of the most legendary people to ever live, and this tattoo pays a homage to the action superstar. The detailing of makes it look like a charcoal sketch done on paper. There’s nothing you can do to further improve the tattoo. If you are content about getting an Arnold Schwarzenegger tattoo, this tattoo of Major Dutch would interest any hardcore Predator fan lurking on this site.

The Alien And Predator Tattoo Sleeve

Nothing looks more cool and satisfying than an entire tattoo sleeve. The purpose of such huge Alien vs Predator tattoo designs is to seamlessly blend together multiple elements and tie them together. This design is absolutely breathtaking, providing proof for the artist’s skill set from which we can learn a thing or two. The details are on point, the red and blue color scheme is a classic one with lightning bolts indicative of conflict. Alien vs Predator has unified fans of both franchises and such a tattoo looks badass. The artist is surely an expert in his craft as he keeps things tidy, and we have had a change in our mind about tattoo sleeves after viewing this incredible piece.

This tattoo of the Predator offers an excellent view of the creature. Fangs out and in the mood to kill, the design provides a new meaning to the word terrifying. The pink and black shading of the mouth is very well done, and the green scales give this tattoo its own look. The shading of the scales, the evil eyes and the teeth are very well detailed as well. Adding the triangular Predator logo would make it a perfect predator symbol tattoo. Such fine craftmanship would assure any client to feel in comfortable company with the artists. The creativity of expert artists like these ensure your tattoo is set apart in an ocean of other Predator tattoos.

The Photorealistic Tattoo of Xenomorph

As kids, we all remember the spine chilling sight of Xenomorph with its razor sharp teeth and tail with a scorpion-like whip. This alien predator tattoo is a photorealistic version of the same scene. Tattoo making tools are constantly evolving and artists also have to update their skillset along with things like tattoo machines and needles. Similar technologies have evolved to make photorealistic tattoos easier and a more accessible artform. You could walk into any party with this Predator art on your arm and instantly steal the show. We feel any hardcore fan should consider this one regardless of their preferences. Writings in an alien script along with this tattoo would act as ornamental accessories to this tattoo idea. Predator movie fans would also appreciate this expert tattoo of Yautja’s arch nemesis.

Xenomorph’s scaly body has been key to show a bare and ruthless killing machine. This tattoo expert has taken on an incredible project to draw the entire skeleton on body. Manufacturers of tattoo equipments have made things like needles fine enough to pull off such a difficult and detail-heavy piece. Anyone interested in such a Predator tattoo project is definitely more than just a fan of the series. The price of such a large piece would be high but its definitely worth the money if the artist is an expert in his craft. Such artists are hard to find but that’s what we are for. This is the home run equivalent of Predator tattoos.

This tattoo is an entire sleeve dedicated to the detailed, goth and creepy extraterrestrial body armor of the Predator. Imagine walking into a party with a dark and sinister looking arm. Making this tattoo would be time consuming, should you choose to get this. You can add more details over multiple sessions and build the piece even more. The time invested would be a price to pay but we are sure such an intricate piece is worth it. You can frame this and exhibit it in a gallery. Tattoos like this send a message about the person’s love for something and any die hard fan of Predator would definitely love this.

The Full Back Tattoo For Predator Lovers

The legacy of Predators have been summed up in this incredibly detailed and gruesome full back tattoo of Alien and Predator together. The tattoo offers space for both the icons together. If your preferences include gigantic back tattoo, then this surely is a great option. You do have to search for a shop where you will be in good company of a skillful artist to pull this one off. You can learn information about such places at your local listings, or on our site.

Tattoos about this legendary movie franchise have been floating around forever and will continue to do so as they keep on making new movies about the franchise that will bring in more people to this community. If you wish to get inked, make sure you select an idea based on your personality and looks. We are here to recommend but sky is the limit and your body is a canvas for infinite ideas to learn and explore. Make sure you go to a reputed and skilled tattoo expert to get the best possible result of your dream Predator tattoo idea.