10 Best Pocahontas Tattoo Ideas You Have To See To Believe! 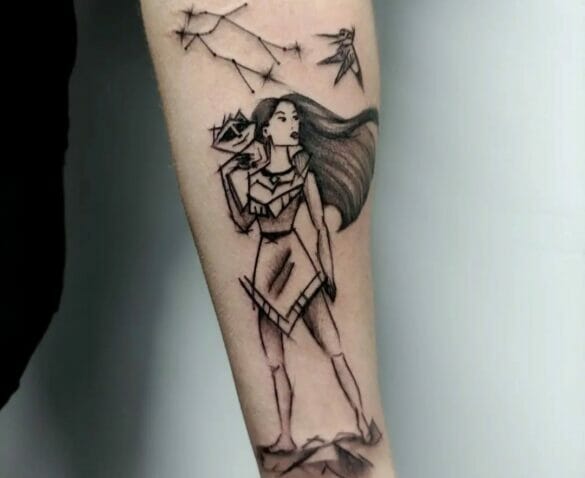 Pocahontas was one of the bravest Disney princesses of all time. So if you love her, then this list of Pocahontas tattoos is right up in your alley.

Disney franchise is one of the biggest celebrated franchise in the world.

Be it kids or grown ups, people of every age are fond of Disney and enjoy it. Most of us have grown up watching Disney and it still brings out the kid in us and hence, the Disney princesses are no strangers to us.

Pocahontas is one of the diverse Disney personas. Her name meaning “little mischief” was the epitome of her own personality. This Disney film represented quite a bit of Native-American culture through Pocahontas herself as well as other characters associated with her. She was of a Native-American descent and belonged to the Powhatan tribe. Myths suggests that this Native-American woman indeed existed in real life and was known for her association with the colonial settlements and settlers. Myths also proposed the fact she lived a very short yet powerful life. The story became a Disney film that put forward the story of the brave woman from a village in Virginia who was the daughter of Powhatan, the paramount chief. She was held captive by the colonizers in 1613 and was influenced to convert into Christianity and was eventually baptized under the name Rebecca. She then was married of to a white tobacco planter John Rolfe and further when the Rolfes travelled to London, she was presented as the “civilized savage”. She soon became somewhat popular among the people but died at a very early age of 20/21. Her stories were later brought to light by John Smith, and remained documented and she is still celebrated today. So if you celebrate her whether as a fellow indigenous person or as a Disney fan and want to commemorate her existence with tattoos, this moulded list of best Pocahontas Tattoos is just for you.

This beautiful tattoo is the portrait of Pocahontas drawn in the art style where her face features are not painted. The details like the wind ruffling her hair, the leaves, the dress as well as the gloss of her necklace are what makes it so thorough and meaningful and is very important to add in the tattoo if one is trying to recreate the realness of the character. All these attributes bring out the essence of the character. It is outlined with the iconic black ink. The tattoo is very subtle yet very detailed. The beauty of the Powhatan Disney princess was highlighted with this art design. So do not be afraid to choose this idea as it could be a perfect tattoo design if this is your style.

Similar to the previous tattoo, this tattoo design is almost same but with added color details. The color style of the tattoo is watercolor and is very lightly added. So if you loved the previous tattoo but wanted to get something colorful, then here is the one for you. The subtle added color of the nature, the shading of the hair and the details of the wind ruffled leaves is a plus. The cool freestyle outline of Pocahontas’s body would look very pretty if your tattoo artist could replicate the exact idea on your skin. In order to bring out the perfection of the tattoo details should be kept in mind.

Including Pocahontas’s two cute special pet characters of the movie, the raccoon Meeko and the hummingbird Flit as well the Compass and Pocahontas herself, this tattoo is the definition of the ideal tattoo design with almost all of the characteristics that represent the movie as a whole. As most of the fans know every Disney princesses have their pet friends and Pocahontas was no different. Hence despite being animals these two characters were Pocahontas’s closest friends. They acted as a comic relief and could be use as the symbols to portray your love for your own pets. And the compass adds a little cherry on the top to the tattoo. The shading details and color details are very important to focus on while replicating the tattoo.

If Pocahontas make you feel like a strong woman and you feel you share a deep connection with her persona, then this tattoo is the one for you. Her portrait with the sunglass that adds a little modern touch to this tattoo and could be considered as a symbol of brave modern women. This princess is nothing like other princesses and was someone who could be ready to start a movement to change the world in a good way. And if you are in search of an idea that manifest in what you believe that is the fact that you are in love with adventure and have the potential just like her, then you just found your match.

Armband tattoos have recently gained a lot of popularity but this trend of band tattoo has been already a thing for Native Americans since a long time. The concept of tattoos itself was popular among the tribe. This upper arm tattoo is traditionally a symbol of death or in the memory of a loved one, but could be interpreted in several other ways. Between the Native-Americans, these tattoos were used to symbolize someone’s rank in the tribe or someone who has completed a certain goal and probably was the reason for Pocahontas tattoo on her arm. Hence Meeko added to the tattoo with all the brown and black shading highlight the essence of Powhatan women, one of which was Pocahontas. But if you are looking forward to get this design and you are not a native, make sure this is not a cultural appropriation.

If you are father or mother who is searching for a design represent their little adventure loving Pocahontas like child or son and a daughter who believes Pocahontas is their idol, then the lively Pocahontas cartoon design is a perfect one. On the other hand if you are a parent of an animal, then the animated Meeko would serve purpose. The minimalistic animated tattoos are something that could be a part of your individuality and could be an ideal for minimalistic style. The colorful details if recreated faultless would be a beauty.

One of the most influential figure in Pocahontas’s life in the film was the talking tree Grandmother Willow. A cute little old soul who acted as a token of spirituality was one of the central characters who played a huge role. She symbolized as the ancient wise figure who served as a spiritual adviser to Pocahontas in the film. This blueprint could act as a spiritual embodiment in your life. So if you are a spiritual being as well as a part of the fandom, you should take this design idea into account.

Pocahontas Leaves Tattoo With A Quote

The design is quite common but this tattoo’s concept is one of a kind due to the quote “She goes wherever the wind takes her…” added to it. If you are an adventurous, nature-loving person and the quote defines your personality perfectly, then you might not have to look elsewhere as it could be assumed you have found your perfect match. The quote will speak for you. The leaves rustling around her as well as the colorful details surrounding her could be representing her aura. Hence could be used as your aura on the design. You can always add your own details to the design.

Adventurous nature of Pocahontas was exhibited in this art design. Compass could be consider as the most ideal emblem for adventure. Every protagonist of adventurous movies always have a compass with them as it helps them find a way. You can also consider it as a sign for finding your ways in life and if Pocahontas was a part of your search then this outline is the quintessential one or could act as an inspiration for you. Add your own touch with some colours or design and Viola! A design just for you.

Saving the best one for the last, this beautiful Silhouette Pocahontas tattoo with another picture of Pocahontas in nature is the best one if you are in love with colors. The color palate adds the beauty with the leaves details. The intricate small details are hard to replicate keeping in mind her features as it would be needed to be the focus on while painting the tattoo on the skin. Make sure to get a professional tattoo artist who can assure you that they are capable to paint this design on you.

Pocahontas is the only Disney princess belonging to the Native-American descent and is loved for her courageous personality. All the mentioned tattoos are for all the Pocahontas fans out there who is in search for ideas that represents not only Pocahontas but also them who are in search of Pocahontas in themselves. So give the ideas a lot of thoughts, add your individual sparks and there you have it, your personalized Disney Pocahontas tattoos.