10 Best Playing Cards Tattoo Ideas You Have To See To Believe! 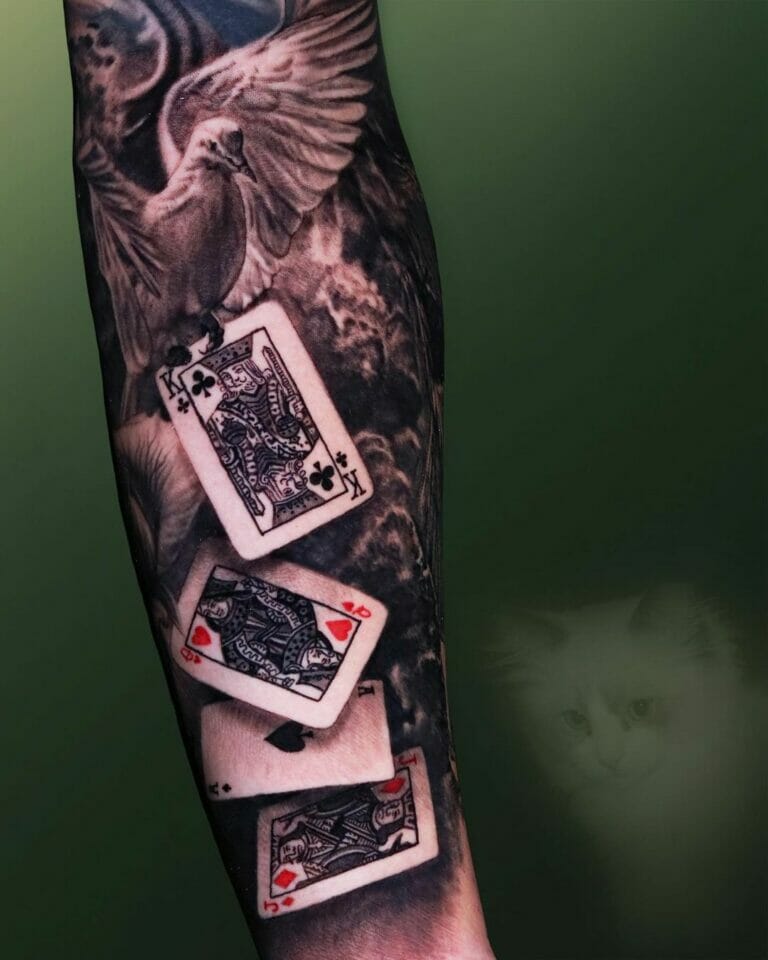 Looking for an inspiring selection of playing card tattoos? Stop right there! We’ve compiled the best tattoo collection for you. Playing cards has been an age-old tradition around the world and judging by their popularity and fanbase, they are undoubtedly going to be in fashion for centuries to come! Feature image @jimleclerctattoo via Instagram

Playing card games is a great way to spend quality time with your friends. All the card game fans out there who draw their inspiration from these games of chance would absolutely love showcasing their attractive pieces of tattoos on their bodies to the world.

Any traditional deck of playing cards usually consists of 54 cards out of which only 52 are mostly used. The other two are Joker cards which although can be used as wild cards in any game but are rarely used in most card games. Each deck comprises four suits- diamonds, heart, club, and spades. Each suit contains 13 cards namely, A, K, Q, J, 10, 9, 8, 7, 6, 5, 4, 3, and 2. But there are many different card hands that people choose to get tattoos of. Some other popular hands include royal flush, four aces, full house, straight. The royal flush includes an Ace, King, Queen, Jack, and 10 from the same suit. The royal flush is a symbol of victory, success, and indefinite authority. Another of the most popular hands is the four aces, where the four aces of the deck get an upper hand in any game, symbolizing wins, prosperity, good luck, and power.

Modern playing cards are layered with multitudes of meanings and symbolism. Card tattoo ideas are a popular choice of tattoos among professional card players and make for stunning tattoos that represent fortune and good luck. People who share an unparalleled passion for gambling and the games of chance like Bridge, Poker, Go Fish, etc. must definitely check out this amazing list of playing cards tattoo designs that we’ve brought together for you!

The Ace is the highest playing card in the standard playing cards deck. In some games, it is even ranked higher than the King. Skulls, skeleton hands, and flowers are classic incorporations in playing card tattoos. This fine line greyscale Ace of Hearts tattoo has skeleton hands holding a cracked heart in the centre of the card, the pointed end of the skeleton hands tracing the crack lines. The rest of the card space is adorned with buds and full blooms of roses with delicately shaded leaves and thorny stems. Tattoo buffs who like their tattoos with a hint of mystical symbolism, be sure to explore this tattoo idea at the earliest!

Rustic king and queen tattoos give off a different look altogether! Inked in black, grey, and red inks on the inner side of the arm, just below the armpit, this tattoo design has an ornamental look. The tattoo comprises the hand of a lady with brightly painted nails showing four cards which are a queen of hearts, a king of clubs, a queen of diamonds, and a king of spades in the order mentioned. The four visible fingers each have a letter of ‘LOVE’ written just above the knuckles. The hand appears to be tied with a rope signifying compulsion or deceit. This king and queen playing card tattoo show us some remarkable examples of detailing and shading which enhance the charm of the card tattoo design.

For first-timers, who are not willing to go into complex playing cards tattoo design, this minimalistic pyramid tattoo is a must-try! This simple tattoo idea with fine black lining is a smart choice for getting inked with a cards tattoo. The design is playful and the specific cards in the tattoo can be customized according to the preferences of the customer. The tattoo can be best placed on the arm, wrist, knee, ankle, etc. People keen to explore body art, go ahead with this motif without thinking twice!

The Joker card in some card games can be an absolute game-changer! Tattoos of this playing card can be depicted in a variety of styles. Used as a wild card, while it often symbolizes good luck for one, it can also symbolize misfortune and deceit for the opponents. In poker, the jack is seen as a good luck charm.

This tongue-tying black and grey tattoo covering the forearm is going to blow the minds of tattoo buffs and card game lovers! Inked in beautiful black ink, this tattoo has been designed both intricately and intensely, with smoky patterns around the card. There is also a skillfully inked realistic butterfly which emphasizes the good luck factor that gets activated with the use of this card. People eager to make a bold style statement with playing card tattoos, this is the ideal choice!

A full-sleeve casino arm tattoo is a classic tattoo design for all the diehard casino fans out there! With so many elements of gambling included in this design, this black and grey playing card tattoo is an attention seeker. With the royal flush, an 8 ball, a casino jackpot, this tattoo has all the elements of a winning hand. This tattoo could represent Lady luck being gracefully kind and helping you win loads of money at gambling. Be sure to get this amazing tattoo sleeve and flaunt it to your fellow card players to see what they have to say about it!

A black and grey card tattoo on the arm always looks extremely charming! Comprising a Jack, Queen, King, and Ace from the spades suit, with two dices summing up to 9 points, this tattoo gives off a brilliant look. For winners of the game, this tattoo is all set to give you a confidence boost and level up your game. The card tattoo drawing in fine lines of black ink looks other-worldly and is definitely going to make card lovers itch to get this tattoo engraved as quickly a possible!

Realistic King Of Hearts And Ace Of Spades Tattoo

Professional players often get classic tattoo drawings of the King of Hearts tattoo to express their affinity towards love, and passion for card games. The Ace card is the top card of the standard deck in most card games. The sense of realism is this tattoo sends a chill down the spine. The bold black lines of the ace card combined with the intricate detailing on the king of hearts tattoo makes a flabbergasting impression on anybody who sees this tattoo for the first time. The light and shadow in the tattoo have been so skillfully managed that it makes one look at it in a completely different way, adding an additional layer of artistic dimension to it.

The most popular tattoo choice – the Queen of Hearts tattoo is symbolic of determination, strong willpower, and perseverance. A lot of people also link this tattoo design to love and it is also one of the most common single card tattooed designs amongst women who feel powerful like a queen. This fun colourful heart tattoo will not only bring their bearer a truckload of compliments but also good luck in matters of love. The vibrant colours used in the tattoo in contrast with black create the feeling of love, lust, and power. This unique and one-of-a-kind design elevates the overall look of the tattoo and is strongly recommended for every card lover!

In most cases, Queen tattoos are very well-liked ideas to get inked with! The special elements of this badass design include skulls, skeletal hands, swords, a red rose, and an eye in the centre lending deeper meanings that create a sense of mystery around the tattoo. The queen holds a rose with a blood tear running from her eyes in the upper half of the tattoo. In the lower half, there is a veiled skeleton that holds a sword in its hands, which may be a symbol of the hand of fate, misery, destruction, and death. The neat detailing together with the watercolour effect adds a different charm to the

If you ever have an Ace of Spades in a card game, be sure of winning! The ace of spades tattoo is a strong symbol of leadership, power, good fortune, and achievement. In this tattoo, a skeletal hand, possibly the hand of fate or death holds a pair of ace cards that appear to be burning. The spectacular black and grey shading makes the hand look almost realistic with a beautifully accurate depiction of light and shadow. The symbol of spade on one of the ace cards has the human eye which gives off a super eerie and supernatural feel to this tattoo idea.

It is obvious that playing card tattoos have a great deal of mystery and history associated with them, and there will never be lesser ways to portray these historic events through brilliant and carefully crafted card tattoos designs. In case you are eager to explore more playing card tattoos, here are some more suggestions to look at: