101 Best Plague Doctor Tattoo Ideas You Have To See To Believe! 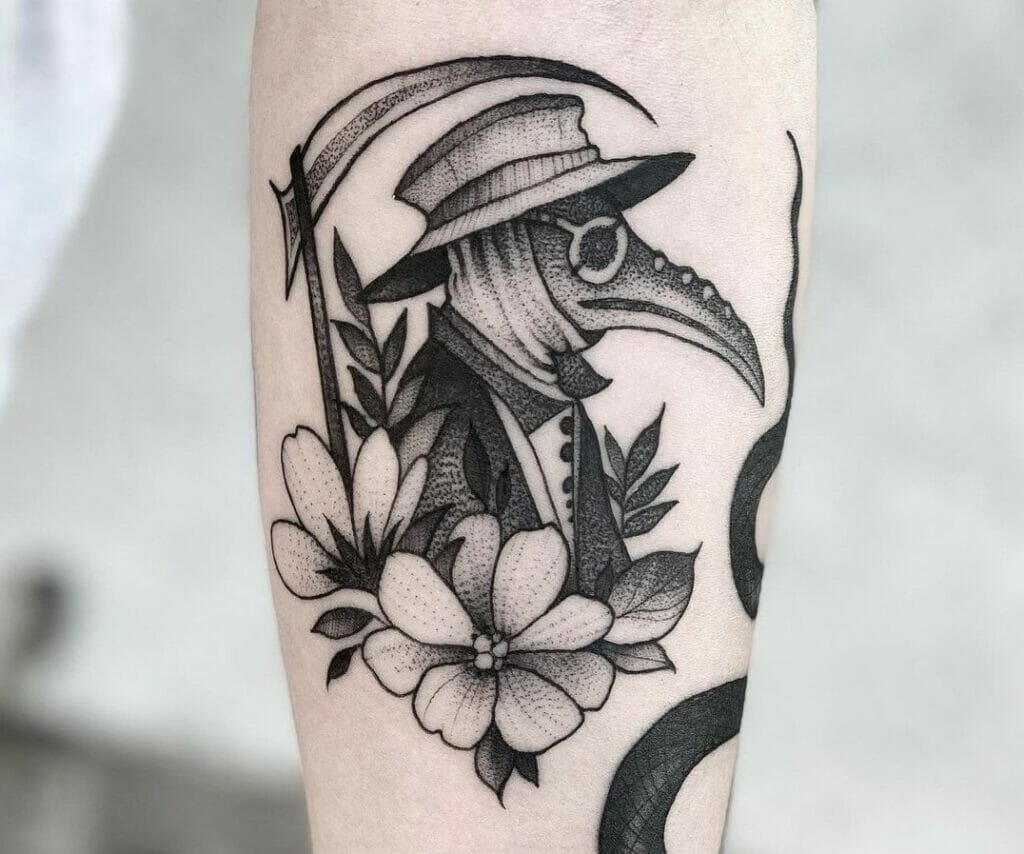 Are you looking for an intriguing plague doctor tattoo design? Check out the list of ideas before going for one!

Plague doctors wore bird masks and long black costumes to treat the victims of the plague during the 17th century in Italy. The controversial outfits of these community plague doctors later turned into a popular theme for Halloween and even tattoo art.

Back in the 17th century, the plague was regarded as an air-borne ailment and hence the Italian doctors wore these outfits to protect themselves from contracting it. This is from the era where medical science did not make much progress and the actual cause of the disease was yet to be discovered. Charles de l’orme, a renowned french doctor designed the iconic bird mask adorned by these doctors. Perhaps, the black outfit along with the mask carried the message of death in the middle ages throughout the continent of Europe. Plague doctor tattoos are associated with a variety of interpretations and have a huge historic significance.

You can opt for different tattoo styles to portray the iconic plague doctor and even pair it up with other designs. Take a look at the curated list of plague doctor tattoos that will touch your soul!

Plague Doctor Tattoo With A Lantern

The plague doctor is holding a bright lantern in his hand that is lighting up his path. The illuminating lantern is the focal point of attention in this dark-themed tattoo. The plague doctor is shaded beautifully in an intense black ink and minimal dot work detailing. Thick grey smoke seems to be emerging out of his glass eye openings. The lantern is inked in a gradient of bright orange and yellow ink along with the detailing in black. You can place this dynamic design on your arms like the one shown in the picture.

A simple plague doctor’s mask can be a great idea for your next ink! The mask is inked in a monochromatic hue with intricate details done throughout the design. Small stripes of lines are inked along the length of the nose-shaped long beak of the mask. The glass eye openings are outlined in black with minimal shading. You can fit this beaked mask anywhere on your body according to your preference.

This spectacular plague doctor tattooed along the length of the arms of the wearer in a realistic style is bound to catch your attention! The glowing glass eyes of the plague doctor are inked with absolute perfection and proves the artistic brilliance of the tattoo artist. The white shading highlights the entire design by adding a contrast to the black inkwork. You can add another design like a crane or a skull to give significance to your plague doctor tattoo.

Here is a new school tattoo of the plague doctor paired with floral detailing. It seems like the mask is placed amidst a bed of bright yellow sunflowers. The negative connotation and dark feeling associated with the plague doctor image are combined with the optimism of the sunflowers in this tattoo art which carries a beautiful message of its own. Perhaps, it is symbolic of the end of the black death caused by the bubonic plague and the advent of a new era filled with hope and happiness.

This classic plague doctor tattoo in a vibrant red frame can be on your wishlist! The doctor is holding the brim of his black hat which gives him a pretty suave look in this tattoo design. The contrasting red backdrop, in the shape of a diamond, effortlessly frames the entire design. The length of his long beak is embellished with tiny polka dots. The luminous red glow in the eyes of the mask matches with the band of the hat. This iconic sinister-looking doctor will look great on your back, arm, or leg.

If you are looking for a plague doctor themed quarter sleeve tattoo then this is the one for you! This artist has put a lot of effort into inking the smallest details in this sleeve tattoo. The illuminating tint of the lantern matches with the glasses of the plague doctor in this stunning frame. Perhaps, the doctor is on his way to treat the sick people in the community. The cynical imagery of the subject is perfectly portrayed in this plague doctor image.

Plague Doctor Tattoo With A Skull

The plague doctor is portrayed inside a coffin and a realistic skull is placed below him in this intriguing tattoo design. The plague doctor is inked in monochrome with intricate shading in black. The coffin frames the design and the red backdrop subtly highlights the entire tattoo. The skull carries a huge significance in this design as it is symbolic of the disease and black death that occurred during that era. This is undoubtedly an innovative idea and at the same time a thought one!

The black plague is transmitted by rodents infected with a particular bacteria called Yersinia pestis. Thus, the incorporation of a rat, the reservoir of the disease, adds depth to the design. The new school style of the half-bird half-rat tattoo looks absolutely brilliant and at the same time enriched with utmost significance. During that time, dried flowers were used to combat the smell of putrid air inside the mask. Therefore, a single red flower is placed on top to further enhance its meaning and accentuate the beauty of the design.

Plague Doctor Tattoo With A Bible

It appears like the plague doctor is reading his satanic bible in this design. The image of a skull and bones on the cover is certainly indicative of that. The halo behind the plague doctor brightens up the entire design. The floral motif below is not one to be missed either! This vibrant design will surely be a fashion statement if inked in the right manner like the one in the picture.

The plague doctor has adorned his iconic bird mask with a long beak and is carrying a crane along with a briefcase with him. During that time, people lived with a fictitious idea of the plague being an air-borne ailment. Thus, the doctors treated the infected patients with a crane to avoid any human contact. You can ink this intriguing design on your body if you are aiming for a darker feel!

What is the meaning of a plague doctor tattoo?

A plague doctor tattoo is a popular design that symbolizes protection, strength, and resilience in the face of difficult times. The traditional iconography of the plague doctor—a beaked mask with an eye-slit held closed by a strap, staff in one hand, and lantern in the other—represents protection from disease, as well as a strong will to fight and survive during times of crisis. The symbolism of this tattoo can also represent mental strength, faith in the face of doubt, and a reminder to stay vigilant against unseen threats. In some cases, it can also be used as an homage to medical professionals who bravely fought the plague and other diseases throughout history. Ultimately, this tattoo is a powerful reminder to stay determined and brave in the face of adversity.

Why are plague doctor tattoos so popular?

Plague doctor tattoos are popular for a variety of reasons. For starters, the traditional iconography of the plague doctor—with its protective mask, staff in one hand and lantern in the other—is visually striking and highly symbolic. It is a strong reminder of protection and resilience during difficult times. Additionally, many people appreciate the symbolism behind this tattoo, which is often used as a reminder to stay vigilant and brave in the face of adversity. Finally, it can serve as an homage to medical professionals who fought against the plague and other diseases throughout history. Ultimately, this tattoo is a powerful reminder of strength and courage during tough times.

What are some of the best plague doctor tattoo designs?

Plague doctor tattoos can take many forms, from simple outlines to intricate designs. Some of the most popular plague doctor tattoo designs include: a disfigured skull wearing the traditional beaked mask with an eye-slit held closed by a strap; an apocalyptic scene with a skeletal figure in the foreground and a cityscape in the background; and a traditional image of the plague doctor carrying a staff in one hand and a lantern in the other. Other popular designs include a skeletal figure with wings and a beaked mask, as well as an illustration of the grim reaper wearing the traditional plague doctor outfit. The possibilities are endless when designing your own personal version of this iconic tattoo.

How much does a plague doctor tattoo cost?

The cost of a plague doctor tattoo will vary depending on the size, complexity, and placement on your body. Generally speaking, most small to medium-sized plague doctor tattoos can range anywhere from $50-$200. Larger or more intricate designs may cost more—somewhere in the range of $300-$600. Ultimately, the best way to determine the exact cost of your tattoo is to consult with a professional artist. They can provide you with an accurate estimate based on your specific design and placement.