10 Best Pirates of the Caribbean Tattoo Ideas That Will Blow Your Mind! 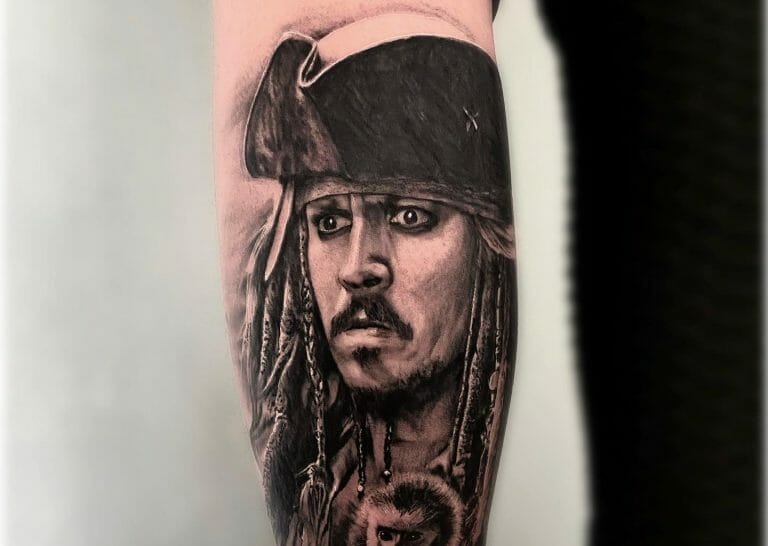 These Pirates of the Caribbean tattoo ideas are perfect for fans of the film franchise. Check out these super cool tattoo ideas inspired by the series.

The Pirates of the Caribbean series movies are a blockbuster and a favourite for many.

The movie series has a big fan following and has impacted many people’s lives. Every pirate of the Caribbean fan has considered getting a tattoo inspired by the movie series.

When watching the Pirates of the Caribbean, remember the spooky skeleton, Jolly Roger? That was a favourite of many. If you want to get this Caribbean character tattoed on you, this tattoo art is perfect. It is a colourful tattoo, and the colours have been placed very intricately, giving it a real-life feeling.

The shading of colours between the green and yellow on the skeleton and the various shades of brown on the wheel has been done perfectly. Even the colours of the bandana have been blended in with so much precision. The blending of the colour is what gives it a realistic look.

Are you a fan of Disney? Captain Jack Sparrow is a very famous character of Disney. If you are a Disney fan, this tattoo is perfect for you. This double hand full sleeve tattoo showcases all the favourite characters of the Disney franchise. Toy Story, Pirates of the Caribbean, to cars have all been portrayed in this beautiful tattoo.

This magnificent tattoo has a lot of intricate work that needs a lot of patience and expertise to finish. This tattoo is made for you if you want to showcase your love for Disney movies. Make sure you are getting it done by a professional artist to achieve the exact look.

This tattoo of Jack Sparrow has been wholly done using dot art. The most fun part about this tattoo is that the entire thing has been created using just dots. This gives the tattoo an edgy yet classy look that looks astonishing. This pirate tattoo is going to look perfect with any outfit that you choose. You must consider this sparrow tattoo if you are a Jack Sparrow fan.

Ship in a Bottle Tattoo

Remember Black Pearl that sailed on the sea and gave us the legendary movie series to enjoy? This pirate ship tattoo showcases the majestic ship sailing across the river. It is inside a glass jar, and around the jar is the tentacle of an octopus. This beautiful piece of body art is a vital element that represents the movie for all the connoisseurs of the cinema. The black pearl has been created with a lot of precision.

When we talk about the Pirates of the Caribbean, we cannot forget the wicked Davy Jones. This highly detailed tattoo of the character showcases the character perfectly. Every detail has been tattooed on the skin, making it look almost real. This new tattoo will look great with any look that you choose.

You can also add colour to the tattoo to suit your linkings. The tattoo itself is a statement in itself.

Whenever we think about pirates, the first thing that pops into our minds is Captain Jack Sparrow! Every person knows the character just from the name, and it is an essential part of the Caribbean movies. This Jack Sparrow tattoo – played by Johnny Depp – looks almost real. The detailing on the tattoo has been done with a lot of precision which makes it look 3D!

The sparrow tattoo meaning is highly significant for the Pirates of the Caribbean fans. This sparrow tattoo can also be customised according to your liking. You can add colours that you like to enhance this Jack Sparrow tattoo.

Pirate tattoos mean nothing without their medallion. This Pirates of the Caribbean medallion tattoo is a symbol of the world’s most comprehensive famous series. Each and every groove of the medallion has been created very finely. If you guys are looking for a simple yet elegant symbol for the series, this tattoo is for you. You can make your own customisation to the tattoo if you want by adding in some colours.

Are you searching for pirates of the Caribbean tattoos? Well, then this beautiful portrait of Calypso is something you should get inked. The character Calypso was a woman of power with stunning features. The tattoo is detailed and skillfully portrayed by the artist. The detailed work and the 3D effect of the tattoo add a real depth to the virtual elements of the tattoo, which escalates the beauty of the character.

This beautiful portrait will fit with more or less every look that you go for. You can also add some pop of colour in the background to customise it according to your liking. You can choose to get this portrait on your arm or leg.

The Dead men tell no tales was realised in the year 2017. This part is known to have significantly impacted people’s lives. Many people have also claimed that this part was their favourite from the series. The tattoo has the name of the movie written around the famous Caribbean medallion.

The details in the medallion have been shown beautifully. The golden and brown combination looks terrific and gives the tattoo a realistic look. The colours look beautiful against all skin types. Pirate tattoos can often be challenging to choose from, but this one is simple yet straightforward and shows your appreciation for the series.

Pirates of the Caribbean Skull Tattoo

Whether you are a fan of crossbones or the pirates of the Caribbean series, skull tattoos have an aura of their own. This pirate skull tattoo symbolises many things and can also have its meaning. It mainly features the pirate’s skull with some accessories. The Blackbeard’s rough hair and jewellery feature strength and power, symbolising typical wholesome pirate themes.

If you are searching for something bold and straightforward, you can surely go for this tattoo art. This tattoo will fit in with any style and give an edged look. You can get this tattooed in a variety of places like arms, neck, back, legs and shoulders. It will look excellent and bold in any place.

The Pirates of the Caribbean is a legendary movie series. It’s a favourite for many, and people are often deeply impacted by the movie that they want to get themselves tattooed with something that symbolises the movie. We couldn’t help ourselves and are adding some extra tattoo ideas for you to choose from.