10 Best Pig And Rooster Tattoo Ideas That Will Blow Your Mind! 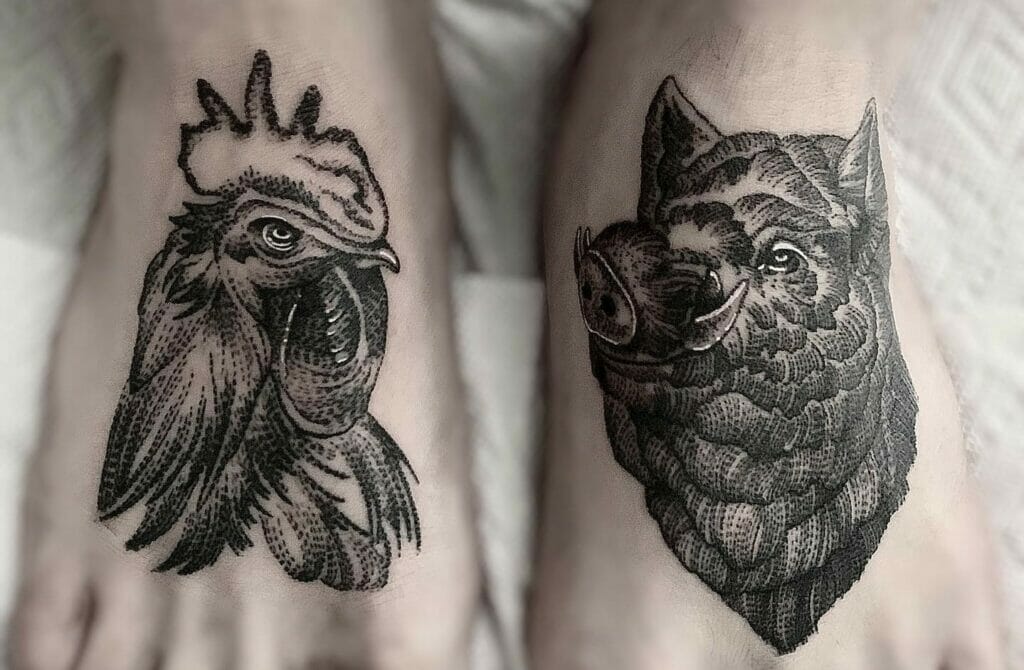 Brainstorming ideas for your next inking inspiration? You should consider getting a pig and rooster tattoo to celebrate this voyage called life.

Traditionally, sailors tattooed pigs and roosters on their feet.

When it comes to the source of the tattoo, there are two popular explanations available. Since rooster and pig is such an odd pair, you are bound to wonder, what does a rooster and pig tattoo mean?

The origin and meaning are both interlinked. One theory says that since roosters and pigs were farm animals, they were not very fond of water and were believed to find shore quicker than anybody else. Hence, a sailor hoping to avoid drowning in the seas would tattoo these animals on his feet. In the other explanation, it is said, the rooster and pig tattoo became somewhat like a pair of good luck charms during World War II. During the war, the Navy shipped pigs and roosters in crates made of lightweight wooden frames. As a result, even when shipwrecks took place, the crates acted as personal floatation devices for the livestock. That is why the sailors slowly started associating this tattoo pair with good luck.

If you are a fan of Disney, these two animals need no introduction. The rooster is Heihei from the movie Moana, and the piglet is Pua from the same movie. Heihei, as Moana said, is a bit special, and that facial expression is captured perfectly in this tattoo. On the other hand, Pua is being his adorable self, smiling brightly. This is a fun little twist on the typical pig and rooster sailor tattoo.

Pua, in the movie, is the protagonist’s biggest caregiver, and even though a piglet, she seems to understand her more at times than the humans around her. Heihei, on the other hand, is clueless but always has the best intentions. So, the individual with these images tattooed might be a bit slow, but they always want the best for the people around them.

This is the most common version of a pig and rooster tattoo you can find, and it is also inked in the classic style. In this tattoo, the rooster and pig appear panic-stricken as they try to run away from something. Although it may not be very realistic, the pop of colors on this piece certainly makes it an eye treat. The rooster tattooed has bright shades like pink, yellow and green, while the pig is bespeckled with black spots on a brown body.

The color red, often associated with danger, is seen in the background of both tattoos, which indicate the animals are in trouble and, therefore, trying to save their lives. In keeping with the classic style, each tattoo is inked on each foot as sailors would do to stay safe.

Now here is an interesting improvisation on the traditional pig and rooster tattoo. The tattoo is complete only with black ink, as is the case for Polynesian tattoos. The various patterns are all inspired by Polynesian designs. At a glance, the shark teeth, ocean waves, and spearhead symbols spread over the rooster and the pig.

Each shape has symbolism attached to it. For example, shark teeth resemble an individual’s adaptability in an unfavorable environment. Similarly, the spearhead is a motif for a person’s warrior-like will and determination. The waves signify the constant motion and change in life, just like the waves in the sea. Therefore, these different styles and patterns found in tribal tattoos are a great mode of self-expression.

Adventures Captured In A Bottle Tattoo

Instead of the right foot, this tattoo is inked on the right thigh. Taking a departure from the predictable designs, this piece wins when it comes to creative flair. Inside the bottle, it looks like the nighttime has been captured with a full moon. Clouds float around as stars twinkle in the night. A pig and a rooster can be spotted at the bottle of the bottle, both floating in wooden crates amid the sea. They seem to have escaped a shipwreck displaying a surprising survival rate. Around the bottle, sealed with a cork, some flowers can be seen.

This excellent piece of body art is the fruit of the labor of a skilled artist. So, make sure you get the best design for your sailor tattoo. The witty use of grayscale helps to give added depth to the tattoo.

Ready To Face The Sea Tattoo

In this pig and rooster tattoo, instead of the wooden crates, the rooster and pig have gotten wiser on how to cross the sea. On one foot, there is a rooster tattooed wearing inflatable swimming armbands on both of its wings. The pig on the other side is carrying a typical floating tube. Both look as though they are walking toward the beach to enjoy a nice, sunny day. Another fun detail in this piece is the shape of an anchor tattoo which the pig is flaunting!

Since the pair of tattoos is meant as good luck charms, it just makes sense as a visual play to make them wear floating gear. Besides, it can also symbolize how the one getting inked is ready for whatever challenge life throws at them with their flotation devices. This is a certain way that goes perfectly with the silly anchor on the pig, as anchors are symbols of stability that one seeks in life.

This tattoo takes us back to the illustrations found in old storybooks. Both tattoos are done on the hands instead of the feet. On the other hand, the pig and rooster tattoos have a realistic touch to them. The white rooster with a red comb against the pink pig is tattooed on the skin. Both are holding a rope that looks like a noose.

The spectacular details of this body art can only be handled by experienced tattoo artists, so make sure to get the best one and be prepared for more than one lengthy session.

For those who like to focus on tattoos that are meaningful, this pair might be worth contemplating. Neither the pig nor the rooster is given any clear features except their outline. A black silhouette in its shape is the only subtle indication available. Just like the somber style of the tattoo, the artist paints both the creatures to stand still, unlike the rest of the tattoos.

The compact size allows the pair to be inked in many different spots. Besides, this set is great if you want to have a symbol of good luck without being too obvious.

We love this quirky pig and rooster tattoo. Both figures are sketched in a way so that they look like humans. The chubby pig stands on its two legs wearing shoes and an undershirt. He smiles with his face marked with freckles while his arm displays many tattoos, such as an apple and a knife. The rooster, on the contrary, has comically small legs while his undershirt reads ‘Early Bird’. Both look like they are pot-bellied middle-aged men.

The pair by itself is connected with good luck on the sea. On top of that, the knife is a motif for sacrifice. So, this might be a sailor who is prepared for all the sacrifices that come with a life on the seas.

There is significantly more to this tattoo than meets the eye at first glance. The faces of both creatures can be seen on each foot. Instead of a pig, however, here we have a boar. Both of them look much more fierce than in the other depictions. The idea is completed with the quote ‘tread water’.

The idea behind this tattoo is deeply symbolic. Here we have a fighter who is trying to stay afloat in this tumultuous sea of life, as indicated by the quote. The fierce look in the tattoo means the resolution to fight tenaciously without giving up till the end. This simple piece is one of the favorites among the many pig and rooster tattoos.

Among the many roosters and pigs, we find this pair adorable. The rooster is a joyful celebration of colors, having every hue of the rainbow on its body. On the other hand, the pig is a cute little white and black one. Both seem as though they are running towards each other, with one word on each hand that reads ‘hold fast’ together. A machete appears to be dangling on top of the pig.

While on the ship, ‘hold fast’ may simply mean to make each part secure for a safe journey. However, this metaphor can be applied to life itself. Hold fast is a saying that advocates having faith in one’s beliefs, which is the idea conveyed through this tattoo.

However, this is not the only sailor tattoo with a story or symbolism. Depending on a sailor’s time on the seas, he can get tattooed. For example, the shellback tattoo is part of many sailor tattoos, where an experienced sailor is granted the right to get a shellback turtle inked on himself as a motif that he crossed the equator. So, the more tattoos a sailor has, the more experience he can gather.

It feels a little too soon to say goodbye to the pig and the rooster. Hence, we have to share a few more tattoo designs that you just cannot miss out on.