10 Best Pharaoh Tattoo Ideas You Have To See To Believe! 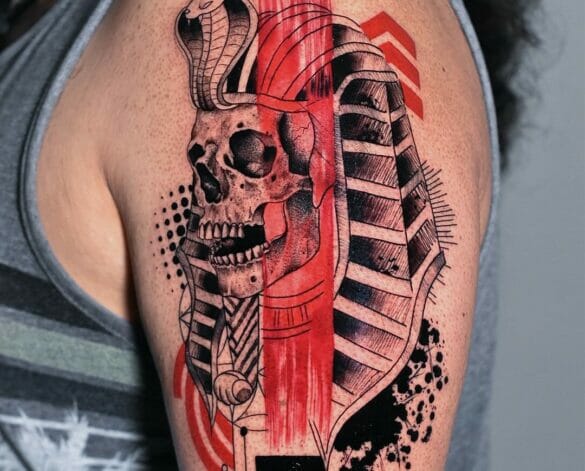 Are you a bit of a nerd about anything to do with Egypt ? Check out this curation of Egyptian Pharaoh tattoo designs and get inked!

In the ancient times, Egyptians believed that the Pharaohs were divine beings and worshipped their rulers in the same way they worshipped Egyptian Gods !

Pharaohs are therefore a symbol of divinity according to Egyptian history. Pharaoh tattoo meaning is therefore used as symbolism for unbridled power and is a great tattoo choice for those who aspire to possess that kind of power and influence!

Egypt is a paradise for most people who claim to be history buffs. It has been immortalised by the iconic pyramids and the remains of the dead kings that inhabit them. The sphinx which is a mystical creature that is half human and half lion guards the treasures hidden away in the pyramids along with the secrets of this ancient civilization.

This Egyptian tattoo is truly a work of art. Tattoos that depict the majestic head of a pharaoh are quite popular with men. This tattoo is unique because of the angular position of the head of the pharaoh. The images of various other symbols from ancient Egypt adds on a mystical charm to this tattoo design. The face of the pharaoh has three dimensional features which gives it an edgy look that you can flaunt . make sure to hire an experienced tattoo artist who can successfully recreate the dark shading that really makes this tattoo stand out.

This pharaoh tattoo is a dark spin on the traditional pharaoh tattoo designs that is currently trending. The skeletal depiction of the pharaoh’s face alludes to the underworld which is where the pharaoh travels to after death. This tattoo has some striking features such as the serpent crowning the skull and the venomous bug at the base of the tattoo which forms the heart of this skull tattoo.

This tattoo is the epitome of royalty and a great tattoo option for men. The intense shading in the tattoo will require an experienced tattoo artist. The ethereal look of this tattoo is attributable to the shadow effect created by the majestic serpent crown on the pharaoh’s head. The smoky effect at the bottom of the tattoo adds flow to it while at the same time making it look mystical and charming!

Tattoo sleeves are becoming increasingly trendy with each passing day. The elaborate theme of any Egyptian tattoo makes it the perfect pick for getting a sleeve tattoo. This particular pharaoh sleeve tattoo is a collection of Egyptian symbol, Anubis the Egyptian god of the dead, the beautiful Egyptian landscape and a fierce female pharaoh!

Nefertiti literally means “a beautiful woman has come”. Nefertiti was a queen of exceptional beauty and a symbol of grace and femininity in Egypt making it a popular tattoo choice for women looking for Egyptian pharaoh tattoos to get inked. Nefertiti ruled the kingdom of Egypt independently after the death of her husband thereby making her one of the few female pharaohs in Egyptian history. This tattoo is truly an exceptional piece of art with the bust of the queen with gleaming eyes guarded by the Egyptian god Anubis at the bottom and the Goddess Isis at the top. The Egyptian hieroglyphs in the background add to the beauty of this tattoo. The gleaming diamond at the centre of the tattoo is the North Star which guides the lone traveller in the desert thereby depicting the Queen as a source of wisdom and a guiding light during dark times. This tattoo is sure to be a conversation starter wherever you go!

Cleopatra requires no introduction. A symbol of beauty with brains, this female pharaoh was one of the last independent rulers of Egypt. Cleopatra tattoo meanings could be interpreted in several ways but this tattoo is a perfect fit for fiercely independent women on the look out for pharaoh themed tattoos. The serpent encrusted crown is synonymous with most images of Cleopatra that are available. The traditional Egyptian jewellery donned by the royalty in Egypt is accurately depicted in this fashionable tattoo complete with the iconic eye makeup associated with the sensuous temptress!

If you are looking to combine your love for felines with your fascination for egyptology, this tattoo has is meant for you. Ancient Egyptians treats cats as sacred creatures. It was their staunch belief that cats could not be owned but chose to befriend a person who they wanted to reveal the secrets of the universe to. Such a person was considered to be blessed and lucky! If you are looking to get a tattoo immortalising your furry friend then look no further! This tattoo is unique because of the bright colour palette used to highlight the background. The cat is depicted as the pharaoh donning the traditional head gear used by King Tut!

Known as the boy prince, King Tutankhamen is possibly the most famous pharaoh to have ever ruled the ancient Egyptian lands. This tattoo is for those who are truly fascinated by the grandeur of Egyptian royalty. Nothing depicts royalty like gold. This tattoo is created using gold pigments that accentuates the royal blue pigments on the pharaoh’s head gear. The traditional Egyptian beard jewellery is created using turquoise pigments for that colour pop! The hints of red in the tattoo adds to the regal colour palette used to create this work of art!

Horus, the son of Osiris and Isis is the ancient Egyptian God to whom all Egyptian pharaohs trace their ancestry. All pharaohs are therefore descendants of Horus and derive their divinity from him. This fiercely masculine tattoo is very popular amongst men for obvious reasons. The charcoal black colour used to create this warrior like image of Horus is impeccable. The eye of Horus tattoo at the bottom of this tattoo creates an intense image of this ancient Egyptian God for those who are interested !

Isis , the mother god of ancient Egypt symbolises fertility. This tattoo is a majestic representation of this winged goddess in all her glory. The colour palette is vibrant and feminine. The double headed serpent and the blazing sun add a hint of melodrama. The statues on either side of the gallery in which the goddess is placed gives this tattoo a concrete look!

If you’re looking for more interesting options to satiate your appetite for Egyptian tattoos, we recommend you check the list below, curated specially for you!