10 Best Patriotic Eagle Tattoo Ideas That Will Blow Your Mind! 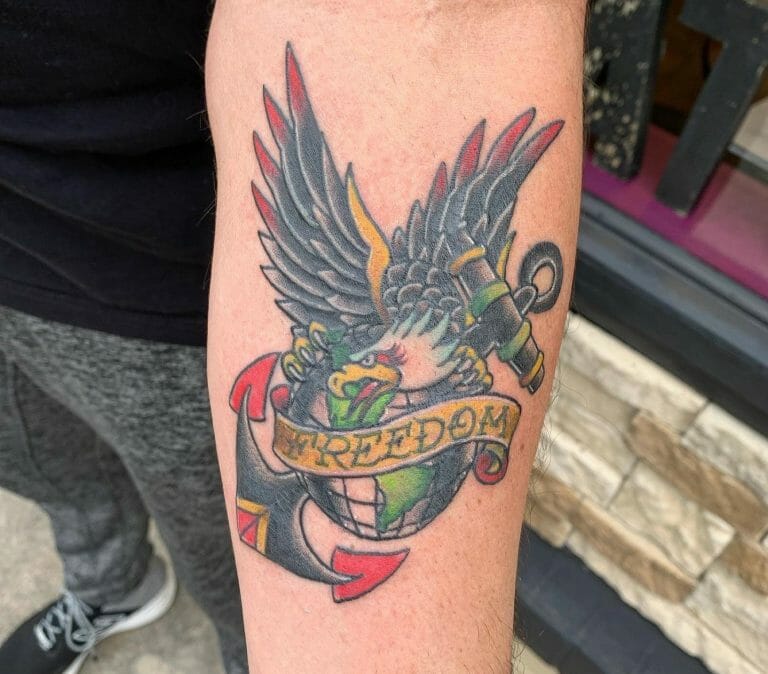 Pride comes with patriotism and using a form of art like a patriotic eagle tattoo is a great way to portray it. Check out the list of tattoos on this page.

Definition of patriotism and how one desires to show it varies from person to person.

But in general, it is the feeling of devotion and displaying determined support for one’s country in different kinds of ways. It is also the identification with one’s own country and going to lengths to serve.

One does not have to be a part of any official service armed forces. It can be the little things and these little things in life towards the betterment of the nation are the ones that count. Tattoo or body art is one form and using the body as a canvas is a great way to channel these emotions. These would also be a great way of showing respect to the front lines of the country such as people in the military or soldiers.

The national bird of the USA is The American Bald Eagle and it has been that since 1782. It can be seen appearing in several government institutions and documents. Eagles are one of the mightiest birds in the animal kingdom and are used as symbols of strength and courage. And including this symbol with the flag of the country can make a great symbol with deep-rooted patriotic meanings to represent one’s patriotism. Whether be it on the arm or upper arm or shoulder or any part of the body you like. So if you are thinking of getting something like that inked, listed below are some of the most popular designs of the best patriotic tattoos that can act as a powerful symbol, especially for people living in America and is a great inspiration for your next ink.

The red, white and blue American flag eagle tattoo manifests a powerful image of patriotism. This patriotic piece has several elements including the bald eagle, the American flag, arrows, flowers and a batch like structure. The eagle symbolizes strength and hence could present the bravery one is ready to show for their nation and the flower could represent peace.

All these together highlight the essence of patriotism and could be a way of showing the bravery that is required in order to retain peace and freedom. This chest patriotic tat is a great way of portraying your love and support not only for your country but for those who have left their normal lives to serve it which in turn secure a peaceful living for its citizens.

The artwork of a black and white eagle tattoo with the stars of the American flag overlaying over the portrait and a cemetery below it is a symbol of showing love, respect and support towards all the lives who sacrificed themselves during the wars in order to gain freedom and security for the rest of the people of the country.

This includes the people who worked in the armed forces, military, soldiers and more. The stars of the flag that symbolizes 50 states of the USA, could represent the sacrificed lives of all the states and the eagle represents their bravery. Most of the time their sacrifices get unnoticed or underappreciated. Their families do not get enough recognition and hence this small gesture of getting this inked would be a great way to recognise their sacrifices.

Simple yet screams a lot of depth, this patriotic ink is of a bald eagle which is the national bird of the USA with the American flag as the background. The flag eagle tattoo is very intricate with even the smallest details like the folds of the flag, the stars and the stripes and especially the features of the eagle are drawn with fine hands.

Cluster of Patriotic Tattoos Back Piece

This patriotic eagle tattoo design is a cluster of many tattoo designs. The tattoos include an eagle, lady liberty, a soldier’s shoes, riffle, chains and cap, an American flag, a bell, a We the people tattoo and more. This is another great tattoo to pay respect to the deceived ones who sacrificed their lives for the betterment of the nation including the people serving the nation. The interpretation to bring together all these tattoos in one design could be left to the wearer.

Since the tattoo clearly contains the ideas and styles of the wearer and has its own meanings, adding and replacing some of these with your own small patriotic tattoo designs would be a great idea.

Another simple patriotic eagle flag tattoo which holds a lot of meaning. The ink design of the national bird, as well as the American flag, can be considered symbols of strength, pride, freedom and more. The black and white detailed shadings in the right places bring out the hyper-realistic nature of the artwork. The intricate details in the eyes of the eagle especially bring out the rawness and make it a great tattoo.

This tattoo would be the perfect one if you want to display your patriotic feelings towards your country. It can also be considered for eagle patriotic sleeve tattoos. One is also allowed to add colours especially red, white and blue which are the colours that are great to represent America.

This incomplete design of a semi-traditional chest Eagle tattoo with a skull and bones under it as well as the American flag as the extended wings is a spectacular tattoo idea if you think about it. As most of us are aware of the fact that the eagle is the national bird of the USA and hence adding the American flag to its wings and it holding onto the skull and bones could mean several things. The ink design is a tremendous design which has the potential to be interpreted in several ways.

So if you are in search of a design which can show the raw emotions of patriotism, this one could be the one for you. So do not hesitate to complete this design with your own style, and always remember to add your charms and customise it to your own individual preferences.

United States Army logo as one of the tattoo designs is a neat idea to show patriotism through tattoos. “E Pluribus Unum” in the logo stands for ” One from many”, a phrase offered by John Adams that represents the determination to form a single nation. The logo is hence a symbol of patriotism. The blue colour and red and white stripes of the flag part in the otherwise black and white tattoo is an intelligent move as it highlights the idea of patriotic emotions.

It could be used by not only the people who served in the military for the country and someone who is a family member or friend of theirs but also others who want to get it inked to show their respect for them.

The phrase Death Before Dishonour is a way of showing one’s braveness that every person working in the military or other services believes in and continues to act on it. They give their best till their last breath to serve the country to make the freedom is not lost. This eagle tattoo with the phrase hence is the emblem of such bravery. This tattoo similar to most of the tattoo designs on the list also consists of the eagle and the American flag. The details like the eagle holding onto the flag, the designs in the wings as well as the phrase “death before dishonour” draws our attention to its hardcore appearance.

So this design would be a great one for hardcore tattoo lovers who prefer it raw and is in search of patriotic eagle American flag tattoos.

The Statue of Liberty is one of the infamous emblems that represent America. It was a gift from the people of France to America and is considered a symbol of freedom and democracy. This dark tattoo with a skull instead of the real face of lady liberty could mean the death of freedom and democracy. It could be used as a symbol to wake the people of America and fight against the evils that have led to its death. The addition of the eagle in the tattoo could mean the death of bravery to move forward and bring a change. The feminist approach to the tattoo could also be an awareness and a symbol of the lack of respect for women.

The idea of the tattoo is a very pre-modernist style of art and would be the perfect one for all the post-modernist enthusiasts.

This bald eagle patriotic tattoo forearm is one of the majestic tattoo designs. The eye of the eagle is the highlight of the design and could be used as a symbol of pride. The meaning can be moulded in different ways depending on the wearer. It would be a perfect design to be used as a part of an eagle patriotic sleeve tattoo. The intricate black and white shading add to the magnificent effects of the design.

If you are determined to get patriotic eagle tattoos to publicly exhibit your patriotism, do not hesitate to choose from this list. Customising it to your own preferences would add to the individuality and would add to the meaning.

Here are some more suggestions for eagle patriotic tattoos: