10 Best Owl Chest Tattoo Ideas You Have To See To Believe! 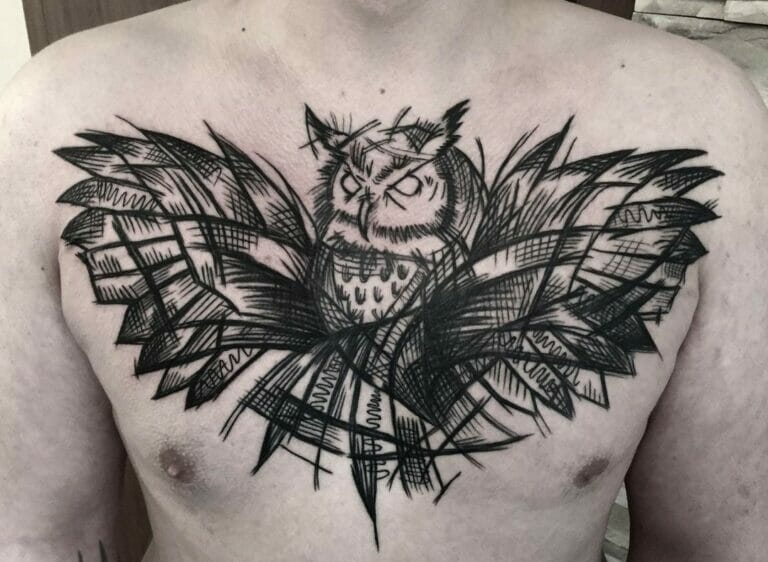 To add that extra edge to your everyday looks all you need is to have your pick of this fantastic choice of owl chest tattoo ideas!

These regal creatures who reign the night-sky navigate discourses ranging from the Bible to pop culture.

Owls are species invested with rich metaphorical significance. Across the world, owls are heralded as symbols of scintillating intelligence, profound wisdom and sacred knowledge.

Some tribes in Native America consider the hooting of an owl as an omen since to them owls symbolize a journey to the afterlife. The Bible abounds in owl symbolism. They are portrayed as birds with big eyes and lovely wings drawn to the cool and tranquil energy of the moon. Unlike Christianity, Celticism celebrates the birds as fierce warriors and loyal guardians of honour and secret knowledge. Finally, with the publication of the Harry Potter series, the owl symbol took on new meaning through Rowling’s characterization of lovely and memorable Hedwig.

Guys, get yourself inked with an eye-catching owl tattoo design to let your inner mysticism and sagacity shine through your skin. From a classic outline of the bird to an intricate design specific to the last detail, here we present to you an attractive collection of owl tattoos each of which is a tribute to the regal spirit of the bird.

This full-size owl chest tattoo with an exclusive focus on the spread-out wings of the bird drenched in the shades of brown, blue, orange and fiery red is style redefined.

Besides being explicitly eye-catching, this tattoo also brings to the surface the transitional relevance of the bird within the cultural discourse. The outward turned big eyes of the owl in the picture symbolize the clarity of thought and vision. To see through trickery and deception is an attribute generally associated with owls since their vision can penetrate the darkness.

Taking up almost the entire chest and some part of the upper abdomen, the colourful tattoo is at once fun and profound.

With so many colours seeping into each other it is difficult to tell this one from a painter’s canvas! The hooked beak and the brush effect adds dimension to the entire thing.

This tattoo can be inked on any part of your body but obviously, the vibrancy demands exposure. The unique concoction of serenity, soulfulness and style is something we notice in both owls as well as this owl tattoo.

If the owl is your spirit animal and you never want to break free from the spell of colours then this owl tattoo is just for you!

If you are more akin to the haunting seductiveness and the sinister allure of the owl symbol then the realistic owl tattoo is for you.

This one is a shade of light and dark shades which brings out the poignancy in the owl’s eyes with terrifying precision. It inter-weaves the demonic and the mythic elements that various cultures trace in an owl into an owl chest tattoo which is simultaneously subtle and searing.

So, hoot-are- you waiting for?

The great horned owl is one right out of a storybook! With its long ear-like tufts, deep hooting voice and glazed yellow stare, this deadly predator can take down on anything and everything. Of all the owl tattoos listed here, this one is perhaps the most appropriate take on the dynamic and the almost vortical life force of owls. This is so because it captures the bird in its flight.

Another variation on the realistic owl tattoo theme, this one is a cross between the sublime and the ferocious. The owl tattoo once royally spread across the chest transforms you into a showstopper in the blink of an eye!

Get this one as a breathtaking shield on your chest to divert away from all negative energies and as far as the style quotient is concerned, let your skin do the talking.

This one is a departure from the traditional realistic owl tattoo designs. The incorporation of manga effects alongside the bold application of strokes has assigned to this chest tattoo design a stylish quality that dwells on the borderline between the quirky and the avant-garde.

To be precise this is exactly that small owl tattoo which, unlike most owl tattoos, can be readjusted in size and shape based on your preference and can be inked anywhere on your body and not just on the chest. The fluidity in the design allows you enough space for experimentation.

The aggressive look on the face of the owl in this tattoo probably alludes to Chinese folklore in which owls share their lineage with the legendary phoenix and stands for fierceness and wisdom.

When it comes to realistic owl tattoo ideas, we can never run out of ideas! Social media is flooded with such designs which further adds to your confusion. But worry not, here we have it all curated just for you.

The owl is an enigma. Its symbolic meaning changes with a change in culture and geography. But apart from the symbolic interferences, even as a bird, it possesses certain qualities like the ability to switch and adjust vision from telescopic to microscopic in a matter of few seconds makes it stand out. Thus, the owl tattoo design inserted here has its eyes created in an out of focus manner.

The skull tattoo motif which we find clutched in its talons has a special significance. In many cultures line Indonesian, Hindu, Roman and Celtic the owl is considered as the “angel of death”. The human passage from this life to the next is sometimes believed to be guarded by the owl. Thus, the skull tattoo is a reminder that the nocturnal bird has influence over death.

An owl shares an intimate and inextricable relationship with time. The phases of the moon and the rise and fall of the tide also affect the movement of these nocturnal species as many ornithologists hold.

An owl symbol with a clock clutched in its talons signify the role played by the bird in relation to the metaphorical transition of time. This owl tattoo is uber-cool in the approach it takes to establish the connection between an owl and time.

The concoction of the metallic blue and jazzy black is a heady one and a brave one as well because the clock has a spiral shape which gives it surreal touch.

The owl tattoos are a great way to experiment with colours and designs since they vary so much in shapes and patterns. The one we have for you here is a majestic full-face realistic owl tattoo diffusing its fuzzy and golden aura across and down the chest which makes it at once a neck and chest tattoo.

The neck tattoo can be inked alongside any arm tattoo which will accentuate the nuances into sharp precision. The sharp yellow eyes of the owl and the white shading along the beak-line is contrasted with the blur, out of focus technique used to paint the rest of its body which if metaphorically explored can imply the diurnal-nocturnal duality with which an owl is invested.

The grandeur of a full-size front profile of an owl with its majestic wings spread out behind it in a posture of devastating ferocity exudes royalty and animalistic energy which is extremely contagious.

Unlike traditional owl tattoo designs, this one does a commendable job in highlighting the features of the bird using only black ink. The contours spiralling the deep-seated eyes of the owl portrays them as an all-knowing pair of eyes drenched in age-old wisdom and unfathomable profundity.

The idea is to render this owl tattoo design a certain psychedelic effect so that the chest which it adorns appear more toned and fit.

Of all the owl tattoo designs listed here, this one is a sui generis. Apart from skull and clock symbols, what best represents the intrinsic knowledge and wisdom are the big eyes of these birds that seem to penetrate right through you.

The idea behind this owl tattoo design is to capture that hypnotic and mystifying gaze of an owl. The gaze is unutterable and inscrutable. It is to make sense of it without rendering the mysticism reductive, the focus of these tattoos is entirely on those eyes.

The owl tattoo designs related to this particular one is Avant-Garde in the sense that they dare to concentrate the entire being of an owl in its eyes and do not hesitate to experiment with colours as bold as these.

In conclusion, an owl tattoo is a manifestation of those very qualities within you which makes you one of a kind. Patience, wisdom, tranquillity, sagacity, ability to keep still contribute to the process of your transition from a child to an adult. The answers you look for, the destinies you seek, the darkness you are expected to make sense of and the light that often blinds you with its terrifying clarity bring you as an entity closer to the owl.

To get yourself inked with any of these above owl tattoo designs is to offer your worship to forces eternal and transitional. Whether it is day dying into night or life fading into death or memory seeping into oblivion, it is against the eternal tapestry of time that all things transitory and ephemeral are played out.

An owl tattoo celebrates this lightness of being hovering around the threshold.

Apart from the owl tattoos included in this list, you can also check out further variations and designs on the theme such as: