10 Best Oriental Tattoo Ideas That Will Blow Your Mind! 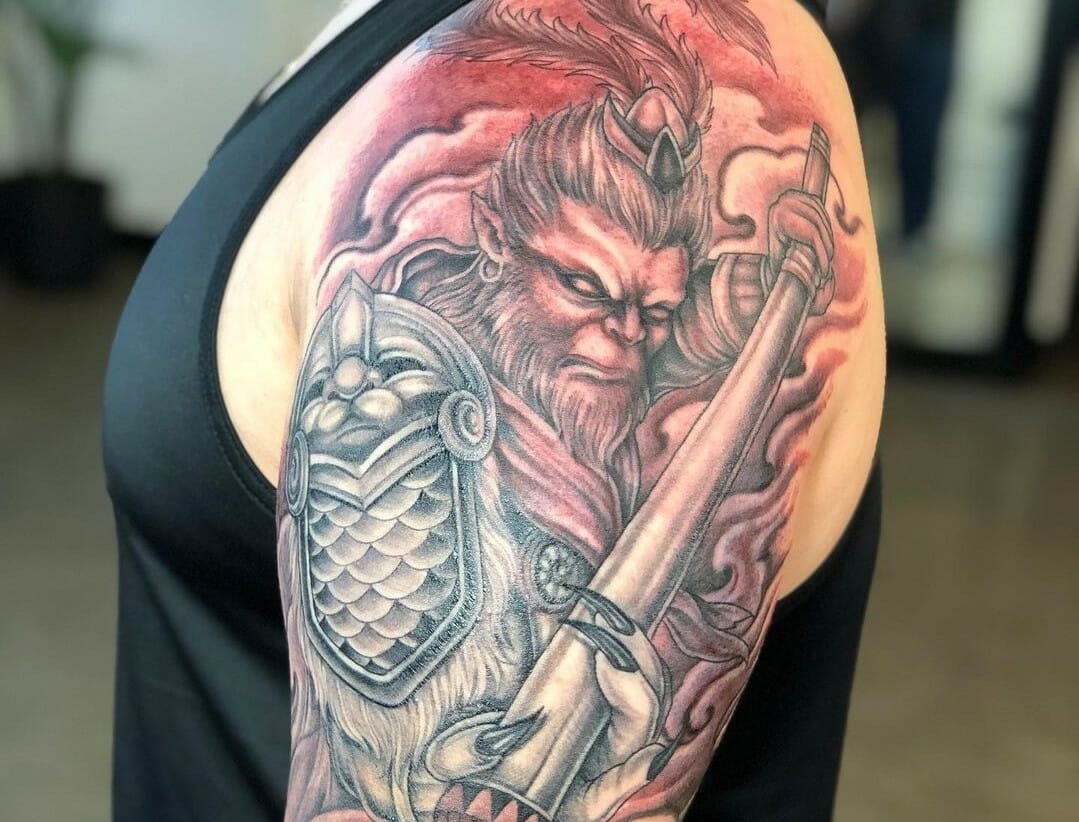 Do you fancy oriental tattoos? Click here for the 10 Best Oriental Tattoo Ideas with their meanings to suit all your preferences.

With their rich history, they symbolize a variety of unique and deep meanings from wisdom, strength, protection, loyalty, blessing, faith in God to wrath, wealth, bravery, desire, and motherhood as well. Sometimes their meaning can be very deep, while the other times, their beauty is represented by their unique style.

Japanese tattoo designs have a special spot for dragon tattoo designs for their variety of meanings from wisdom, longevity, tranquillity, prosperity, desire, protection, and spirituality to destruction. On the other hand, in western countries, dragon tattoos symbolize bad omens such as fear and greed.

The tattoo artist has covered the entire hand with the Japanese dragon tattoos, making it a great option for sleeve tattoos. Major parts of the dragon tattoo are inked with dark shades with deep coloured outlines to show the separation between different tattoo designs. They are giving rise to several wave Japanese style patterns all over the oriental tattoo sleeve. Some wave-like designs on the dragon are tattooed with a dull yellow hue with some shading effect giving it a 3-D outlook. These types of dragon tattoos are some of the most popular tattoos among the traditional Japanese tattoo design ideas.

With its dual habitat of both land and water, Japanese tattoos of frogs are well known for adaptability, evolution, and life cycle. It also represents transcendence, purity, ascendence, fertility, prosperity as well as rebirth. With a few different shades and patterns, you can make your own frog tattoo.

In the given Japanese tattoo, a frog is tattooed as a warrior with a sword in his right hand. With a very wide meaning, the frog Japanese tattoo designs range from prosperity, rain, ignorance to immortality. The upper body of the frog tattoo is tattooed with black shades along with some green-coloured leaf tattoos. The sword tattoo outlines are deeper than the inner shades. Dark hues have well-defined the intense emotions on the frog warrior’s face. With a small addition of a little frog on the warrior frog’s left shoulder, the whole Japanese tattoo sleeve looks like Japanese art with raven hues everywhere.

Yet with another Japanese tattoo design, Japanese tattoo artists have brought out a beautiful oriental flower sleeve tattoo. With the symbol ranging from love, happiness to pain, it carries a number of deep meanings. Each flower tattoo has its own meaning.

The raven hues of the tattoo sleeve are tattooing almost the entire hand, to be precise, both hands, making it one of the best Japanese tattoos. Flowers of red hues are beautifully blossoming, giving a contrast to the dark background of the sleeve tattoos of both limbs. Golden straps connect different flowers in a curvy manner on the left hand only. Traditional Japanese tattoo culture has a unique place for flower tattoos. It will look great even as a half sleeve tattoo. Flower Japanese tattoo designs usually remind the life and its changes. Cherry blossoms are also included in it.

Fighting skills and strength are just a small piece of what monkey king truly symbolizes. It also represents redemption, mischief, and discipline, along with some clever problem-solving skills. At the same time, Foo Dog represents protection, calmness, and balance.

The given tattoo starts from the upper bicep and goes all the way to the arm wrist. All the Japanese traditional tattoos discussed above mostly have dark hues, unlike this. This Foo Dog Sleeve Tattoo (Yakuza Tattoo) represents Japanese culture in its full form. To some Japanese people, it may resemble evil spirits, while to the other, it can mean good luck. It is completed with some long chains and many inter-connecting patterns; the whole Japanese tattoo sleeve is tattooed with light shade hues of black colour.

With the symbolism of strength, empathy, and uniqueness, the octopus Japanese tattoo sleeve also represents motherhood. The limbs of the octopus automatically regenerate, the same way the tattoo holder is believed to resolve all the problems he faces.

The Japanese tattooing of a huge octopus is done by the artist to paint yet another one of the Japanese mythical creatures. The black pupils of the eyes of the octopus are kinda a centre of an attraction along with detailed tentacles. The eyes are outlined with a dark shade of bright red to illustrate an angry expression. The head of the octopus tattoo is side-ward covered with water waves. Some dark and deep dots are placed here and there, detailing the forehead and tentacles of the octopus. This sleeve tattoo can be adapted to a full-body tattoo, still representing Japanese tradition.

This tiger tattoo is a traditional Japanese tattoo, covering the entire back of the tattoo holder, making it one of the many traditional Japanese full-body tattoos. The tattooed tiger is roaring with all his might. It is surrounded by bamboos, plants, and flowers, forming a forest area. Varies straps of yellow and black are tattooed together in a pattern, making the skin of the tiger. The flowers are shaded with beautiful pink hues, scattering some petals on the tiger. With its glory, the Japanese-style tiger tattoo is one of the best Japanese tattoos. However, it can also be tattooed as sleeve tattoos. You can also check out some of our Leo tattoo designs to include in this full body tattoo.

Japanese traditional tattoos like this have monster figures that are chasing closely behind the samurai while the samurai is unfazed, showing his courage and warrior instincts. This samurai Japanese tattoo design is tatted with black, orange, and red hues. Its costume is laced with yellow straps and forms the traditional Japanese tattoo designs. This tattoo resembles masculinity and honour. Some black smoke clouds are dancing above the warrior illustration symbolizing the bad situations. The sleeve tattoo with samurai Japanese designs is among the best sleeve tattoos.

With the symbolism of rebirth and growth, the Oriental Phoenix Japanese tattoo is an inspiration for Japanese tattoo artists. Due to the range of value it delivers, it is widely appreciated in literature and songs.

Unlike most Japanese sleeve tattoos, this tattoo can be tattooed on any body part, including the chest, as given in this tattoo design. In this traditional Japanese tattoo, deep rich hues of black colour form the dark feathers, which are subtly bringing out a flying phoenix bird. Its feathers are spread out at the backside of the bird, with the main focus towards the right shoulder. Pointed ears of the phoenix are hidden in the deep abysses of black hues while its pointed peck is standing out with its contrast shades. Though the given Japanese Oriental tattoo is on the chest, you can have it wherever you want.

The meaning of the Skull And Snake tattoo can differ for everyone. Some would like to have it as a resemblance to bad old days, while some would appreciate its immortal value. Aside from these meanings, it also shows death.

The given sleeve tattoo is carved with various shades of colours to highlight the skull, snake, and monkey illustration. The presence of a snake, skull, along with the monkey, includes it, among other traditional Japanese tattoos. The snake, shaded with blue, is covering the full arm with its unique waves. The monkey tattoo is wearing Japanese-style armour as samurai warriors. The lower arm is decorated with red flowers which are reaching to the wrists. These types of traditional Japanese tattoos are famous for the dark meanings of the skull and snake, along with an auspicious monkey. You can also add some symbolism of death tattoos here.

Famous for its cartoonish style, oni mask tattoos are inked in flash art style. People with a firm belief in the oni mask Japanese sleeve tattoos can have it.

The given oni mask tattoo work is completed with monochromatic shades, unlike other Japanese tattoo designs. It is tattooed using flash art tattoo style. It is also a symbol to protect from miscellaneous forces. It is placed on a dagger with a ring-like shape at the starting and sharp-pointed at the end. The dagger is flooded with parallel lines in a unique pattern. Most of the tattoo is covered with light shades, unlike the hairs of the face of the mask.

With this last piece of information, we have reached the end of our journey to find a suitable oriental/Japanese tattoo for you. If you still haven’t figured it out, here are some more suggestions: