10 Best Old English Tattoo Ideas You Have To See To Believe! 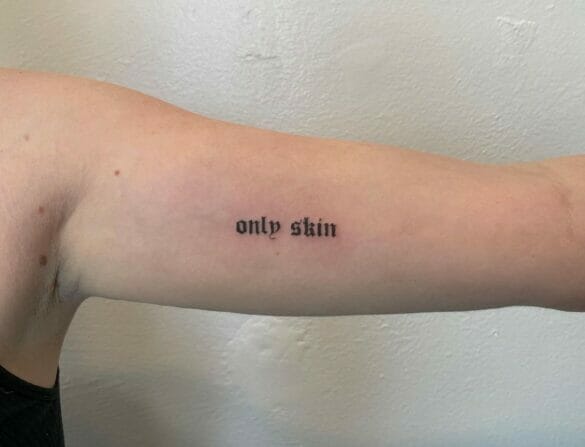 Your wish to get decked up in letters and flaunt an Anglo-Saxon charm is just a scroll away. Pick your best old English tattoo ideas!

While literature and linguistic students might associate the term ‘Old English’ with the ancient West Germanic Language, others, when they hear the phrase, think of the font style known as Old English.

Tattoos with lettering are one of the most popular tattoos to have been in vogue for centuries. But the hype for Old English tattoos has recently surged among tattoo enthusiasts.

There is a mistaken belief that Old English fonts or Old English lettering were used in writing the language known as Old English. But the language existed many years before this font even came into existence. Although some Old English manuscripts or texts were written using this font, this was not the only lettering style that was used while writing Old English. The more popular name for Old English font is Blackletter or Gothic script. This script was used all over Western Europe until the 17th century, and in the German language, it had its usage until the 1940s. When it comes to tattoos, Blackletter stands out as a more authentic style – it’s the most calligraphic form and is heavily ornate. These tattoos have a different appeal to people all over the world. But choosing only the lettering style isn’t all. You have to choose the right words to give your tattoo some meaning. Usually, for this kind of body art, most people prefer words or phrases that give off a ‘bold and brazen’ vibe to go with the Old English lettering style. But there is an infinite number of tattoo ideas for Old English tattoos. So that you don’t feel lost and confused while selecting your own, we have done the work on your behalf and have categorized different variations of Old English tattoos. These ten different styles by different tattoo artists will blow your mind.

This has to be a unique example of an Old English Tattoo. Written in the Monotype Old English text font, this finger tattoo has each letter of the epic poem ‘Paradise Lost’ inked on each finger. For someone who has loved every bit of this literary masterpiece by John Milton, this tattoo would be their ideal choice. Although, the question of whether or not you prefer our favourite rebel child Lucifer’s ways over God’s autocracy comes later. This would be genuinely confusing for others to figure out whose side you’re on. Keeping up this mystery would serve the essence of this tattoo. Lucifer might have lost Paradise forever, but this tattoo would never lose its charm. After all, anything related to the Devil is supremely alluring.

This blackwork tattoo inked in the Old English font depicts a headstone that has two horns and has ‘RIP’ written on it. Some bats are seen flying overhead. The stone has some cracks and a flower is drawn at the bottom. The design is explicitly gothic, and the horns and the bats might be implying some unholy spirits. It’s not a spacious tattoo, rather it is finely inked with thin strokes.

Tattoos with Old English fonts are usually associated with large letter tattoos in Blackletter. What if you try something new with the same Old English fonts? You can have the name of your city, or your hometown inked on your arms or any other body part. For example, if New York has been able to live up to your expectations of being a city that fulfils dreams and you want something to remind you of it, then you cant take a look at this simplistic NY tattoo. It’s small, subtle. The red ink symbolizes life in its vividness. It would be convenient for an arm or wrist tattoo where there lesser room for crammed tattoos.

Appetizing tattoos of foods are nothing new to body art fanatics. But if you want the taste of bold and cute in the same bottle, then this teensy peanut butter jar tattoo is exactly what you’re looking for. The striking Old English lettering style reading ‘Peanut Butter’ bottled in the tiny jar is an utter delight.

Tattoos with motivational messages are extremely popular, and this Old English tattoo has used a simple Old English font that reads “streben nach glück” (strive for happiness). It’s an appropriate choice of words since getting inked brings us some kind of joy. This inked phrase can motivate you to do the things in life that makes you happy. It’s the right kind of push you need.

This apparently simplistic Old English tattoo is overloaded with Biblical significance. The first slide reads “4:27” tattooed on the chest. From a Biblical aspect, 4:27 is a verse in The Book of Proverbs. It tells us not to get sidetracked and to remove our feet from the path that leads to evil. The second slide shows the number ‘333’ inked on the arm. 333 is an Angel number having spiritual significance – it is a symbol of guidance, and will remind you to always walk on the right path if you ever get deviated or feel directionless.

If you’re religious and want to get inked with some holy symbols, this is your go-to tattoo idea.

If you’re a Romantic and want your tattoo to stand out from the mainstream body arts, then choosing your personal favourite from some literary works of art as your tattoo concept would be an eccentric selection. So what if you cannot visit a fantasy land for real! Don’t let it limit your imagination. The famous English poet Coleridge didn’t stop either. If he could create the realm of Xanadu in his poetry and give you the chance to visit the idealized place “on the viewless wings of poesy”, why can’t you manifest it in an inked art? Incorporate an ancient tinge in it by choosing an Old English font for your tattoo letters. There is a varied range of calligraphic fonts of Blackletter to choose from. Personalize your tattoo with a little bit of improvisation.

A tattoo with fine lines and detailing is likely to catch the spotlight. This tattoo design is simply amazing in its properly drawn details, giving it a slightly 3D-like effect. Getting inked is no less than declaring your sovereignty over your own body and your choices, and the word ‘Autonomous’ fits perfectly in this context. The Dracula or Vampire vibes along with the Old English letters are the perfect seasonings.

A good way to memorialize the year that has some special significance in your life is to engrave it on yourself with everlasting ink. Take this 1997 tattoo inked in Old English fonts for instance – it’s screaming something out loud with its bold red ink with sharply pointed edges. It looks like it has been written with blood. The lifelike detail is creating just the appeal it deserves.

Angels tattoos are pretty common these days. So, it’s quite difficult to choose a unique design or pattern that wouldn’t get lost in the crowd. Worry not. This colourful and cutesy crying angel will melt your heart. And if you, too, are a crybaby who ends up crying at the slightest inconvenience – well, you’re in luck. This is just the design for you. The Old English font used in the lettering is probably trying to say, “I might be a crybaby, but I can be tough as well.”

Although the Gothic Script or the Blackletter font is mostly used, there is a wide range of Old English fonts or styles you can choose for tattoos. Why only limit it to letters? Images can be attached to these tattoos as well. There are thousands of patterns and styles for you to explore. Apart from the English language, Old English fonts can be used in other languages as well. You can even choose the very language that is known as Old English to go with the Old English fonts. Save your favourite designs for these tattoos on Instagram, or maybe assort them in different categories for your convenience. There is always room for more than one tattoo. If you create your own designs then use these Blackletter fonts to add to your personal collection.