101 Best Norse Mythology Tattoo Ideas That Will Blow Your Mind! 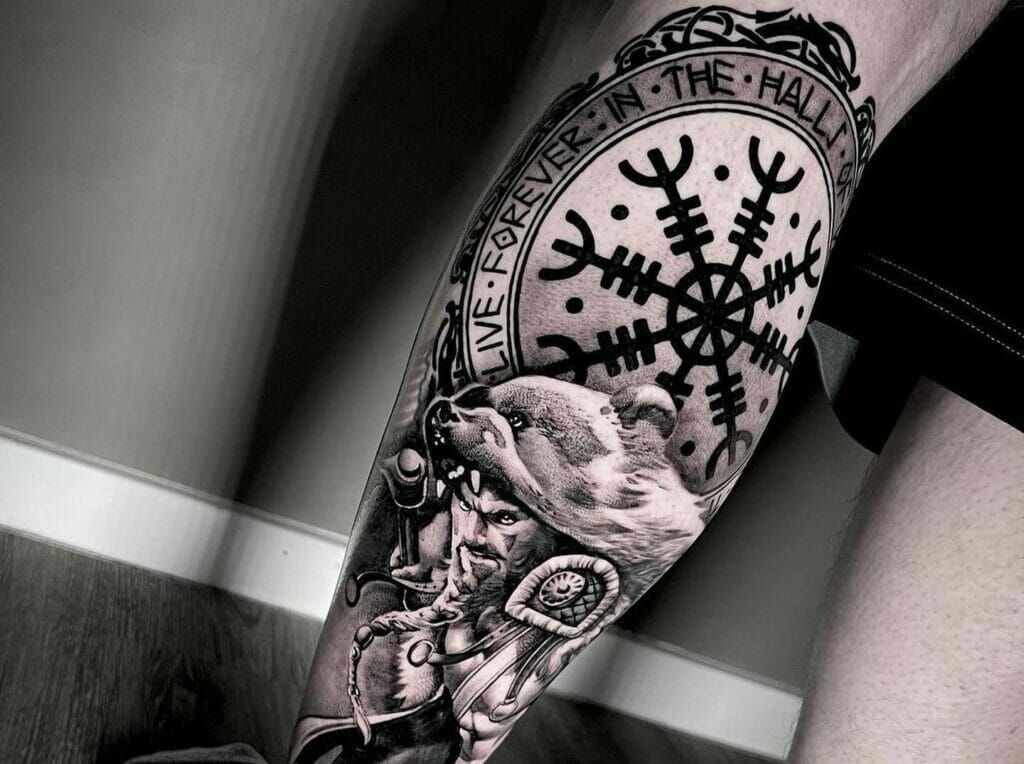 Are you a huge fan of the fantastical Nordic mythological tales? Then go ahead and check out these amazing Norse mythology tattoo ideas!

Norse mythology is famous around the world for its fantastical and amazing stories with deeper meanings.

Each of the figures, gods, and other symbols in Nordic mythology happen to be powerful symbols. Just like the mythological tales in many cultures, Nordic tales also teach us important lessons about morals, values, and ethics.

Norse mythology is full of interesting tales and figures with which you can get a tattoo. If you are a history buff, or someone who loves to read mythological tales, then you will know that Nordic myths are full of stories with Thor, Odin, Loki, Freyja, Fenrir, Heimdall, Valhalla, and Jormungandr. All of these figures are often embroiled in war and battle that comes to a head at Ragnarok. However, their stories also impart important lessons for us. In the earlier days, Viking warriors derived strength and power from these stories as well.

So if you are curious and interested in exploring more ideas about a Norse mythology tattoo, go on and check out these amazing designs!

Norse mythology is full of a number of gods, each with a striking ability and power to protect the Viking people. The most prominent among them has to be the god of thunder Thor. Due to the Marvel comic books and the Marvel Cinematic Universe movies, more and more people have discovered Nordic culture and Norse mythology through the figure of the Thor and other gods like Odin, Loki, and Freyja. There has also been considerable interest in Thor’s awesome hammer Mjolnir, with the three interlocking triangles on it. Therefore, if you are thinking of getting a Viking tattoo sleeve, you can definitely base it on the figure of the Thor and his Mjolnir hammer.

If you are in search of a Nordic tattoo sleeve tattoo, you can also use the figure of a popular and prominent figure in Nordic mythology – the Jormundgandr. Jormundgandr, also known as the Midgard serpent, is the arch-enemy of Thor. According to the legends, Thor and Jormungandr are prophesized to kill each other during Ragnarok. Jormungandr was the child of the trickster god Loki and the giant Angerbotha. This serpent is seen to be consuming its own tail, creating a circular figure. According to mythology, Jormungandr surrounds the Midgard in its hold. If you like the story of Jormungandr and want to give it a place in your Norse tattoo, then you can definitely use some beautiful patterns to express the story and significance.

If you are in search of a Norse mythology tattoo sleeve, then you can also get a tattoo based on the mythological figure of Fenrir. A Fenrir Nordic tattoo would be perfect if you also want sleeve tattoos or a chest tattoo like that of a Viking warrior. In the Norse mythological tales, Fenrir represents wildness and ferocity of a beast. It is said that the gods kept Fenrir tied and bound but it still fleed with ferocious power and grew large enough to kill Odin.

Consequently, if you want some ideas for chest tattoos, a Fenrir tattoo might also be amazing. You can also add rune tattoo designs to it if you want. The tattooing process for such a large tattoo might consume a lot of time as well as tattoo ink. However, the ultimate result will be stunning. Here are some more amazing Norse wolf tattoo designs for you to explore.

In Norse mythology, Huginn and Muninn are two intelligent birds who are a powerful symbol of Odin. According to the mythological stories, these two ravens are Odin’s own ravens and they keep an eye on the entire Midgard. Whenever something happens, they carry that information to Odin immediately so he can take any necessary steps. Therefore, these ravens are respected by Nordic people of Scandinavian descent – as they represent the almight Odin himself. So if you want Norse tattoos or Viking tattoos, you can also ask your tattoo artist to incorporate the figure of a raven to symbolize Huginn and Muninn.

If you want deep, meaningful tattoo symbols from older, Pagan religions, then you should check out some Norse mythology sleeve tattoo designs. Viking raiders and Viking warriors back in the Viking age often had tattoos made with intricate patterns. Their tattoos would serve an important role as they would board a Viking ship to join wars elsewhere. Consequently, you can also draw inspiration from then and get a wonderful Viking compass tattooed on your body. You can also add more intricate patterns or bold color to your tattoo if you like.

You can also add the Helm of Awe tattoo symbol beside it if you want to embellish your existing tattoo. The Helm of Awe is a special symbol in Nordic mythology.

If you want a slightly unconventional Viking tattoo, you can also choose another popular Norse god Loki for your tattoo. Loki is the trickster Norse god and his aim is to create chaos and mayhem wherever he goes. He also has the power to shapeshift that allows him to interrupt and create a chaotic situation wherever he can.

In the Marvel Cinematic Universe, Tom Hiddleston’s portrayal of Loki has been greatly appreciated by fans and critics alike. Movie audiences have loved Tom Hiddleston’s nuanced portrayal of this trickster god who is ready to betray Thor at any moment when it suits him. So if you happen to be a huge fan of this particular Norse god, you should start finding amazing tattoo artists who will make an awesome Loki tattoo for you.

The Norse tree of life is termed as the Yggdrasil tree which occupies a central position in Norse mythology. It is said that Odin himself hung upside down from this tree in order to gain supreme knowledge and wisdom that surpassed every other person and god. This tree is a protective symbol and is supposed to tie together the nine worlds in Nordic cosmology. It is also known as the tree of life in Nordic countries as these tree signifies life, death and rebirth. Hence, if you want a powerful Nordic tattoo with deep meaning, you can ask for a Yggdrasil tattoo. A lot of men get intricate Yggdrasil back tattoos with black ink and geometric shapes and patterns. You can also get the tattoo on your forearm, tattoo sleeve, or chest area.

Odin is the leader of all Nordic gods. Often portrayed as a one-eyed, old man with long, flowing beard, Odin is also the god of healing, death, and wisdom. Odin is also the one who rules Valhalla. Valhalla is the place for dead soldiers which means slain warriors who lost their lives while fighting for a good cause. Many Viking warriors also believed that they would reach Valhalla following the many Nordic tradition.

Consequently, if you want to get a tattoo based on a fierce and fearsome Nordic god, why not choose the figure of All-Father Odin? You can also show your tattoo artist the picture above for inspiration.

Delicate And Feminine Norse Mythology Tattoo Designs Based On Freyja

The goddess Freyja also occupies an important position among all Norse. In Norse culture, she is the goddess of love, fertility, battle, and death. Therefore, Viking women worshipped her following Norse tradition so that they could have children. Consequently, if you are looking for feminine Nordic symbols for your tattoo, you should get an awesome Freyja tattoo just like in the picture above.

If you want to look at some modern Nordic tattoos, as opposed to the usual Nordic tattoos that are quite large and elaborate – then you can draw some inspiration from the picture above. In comparison to the traditional Viking tattoos, the wearer has gotten a simple and stunning armband tattoo work with black ink based on the figure of Jormungandr. The idea is actually quite clever and incorporates one of the more prominent Viking symbols into a really cool tattoo. You can use this idea to create other tattoos with Norse runes, Celtic knots, or other symbols from the Viking culture.

So if you have already decided to get a mythological tattoo, why wait? Go ahead and call your tattoo artist to get your favorite Norse mythology tattoo!

What is norse mythology?

Norse mythology is the body of myths, legends, and beliefs from the Northern Germanic peoples that were passed down orally for centuries before eventually being written down. Norse mythological stories tell of gods such as Odin, Thor, Freya, and Loki; giants like Jotun; and mythical creatures like elves and dwarves. Many of these stories explain the creation of the world and how it was shaped by the actions of these mythological figures. They also provide insight into Norse society, values, and beliefs which were deeply embedded in their culture. Norse mythology remains a source of inspiration for modern literature, art, and music.

What are the most popular norse mythology tattoos?

One of the most popular Norse mythology tattoos is the “Valknut,” which is a symbol made up of three interlocking triangles and is believed to represent Odin’s power. Another popular tattoo design featuring in Norse mythology is the Völva, an ancient Scandinavian female shamanic figure often seen as a sign of protection. The Helm of Awe is another popular symbol with its eight branches representing strength and protection from any type of harm or negativity. Other popular tattoo designs include the Yggdrasil, a mythical tree that connects the nine realms in Norse mythology; Mjölnir, Thor’s hammer; and the Fenrir Wolf.

What do norse mythology tattoos represent?

Norse mythology tattoos are often representative of strength, power and protection. For example, the Valknut symbol is believed to be Odin’s symbol of power and authority. The Helm of Awe is a protective symbol that was worn as an amulet in battle to ward off fear and danger. The Mjölnir tattoo is usually seen as a reminder to stay confident and courageous in difficult times. Other tattoos, such as the Yggdrasil and Fenrir Wolf, represent the Norse mythological belief that life is an ever-changing cycle of death and rebirth. As such, these tattoos can be seen as reminders to stay strong throughout life’s challenges.

How do I care for my new norse mythology tattoo?

When it comes to caring for your new Norse mythology tattoo, proper aftercare is essential. After getting the tattoo, it’s important to clean the area with an antibacterial soap and warm water. Apply a thin layer of fragrance-free lotion every couple of hours to keep the skin hydrated, and be sure to wear loose clothing that won’t rub against the tattoo. Avoid direct sunlight and swimming to keep the area clean and free of infection. In addition, make sure to follow your tattoo artist’s aftercare instructions so you can ensure your new piece stays looking great for years to come!