10 Best Norse Forearm Tattoo Ideas That Will Blow Your Mind! 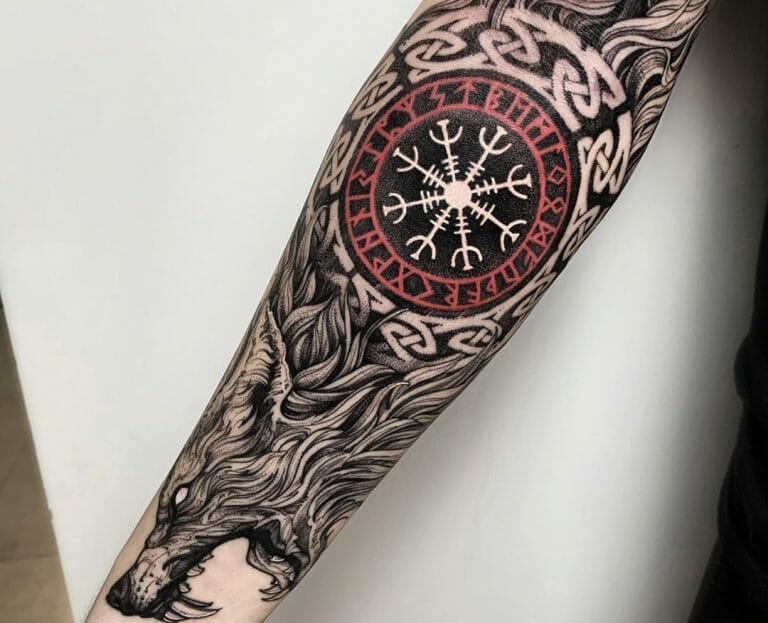 Are you a fan of nordic culture too? Here are some mind-blowing Norse forearm tattoo ideas that you will absolutely love to explore.

The Norse culture was quite popular and even today it has a number of admirers.

The terms ‘Viking’ and ‘Norse’ are used to refer to the same Scandinavian society. These people spoke in ‘Old Norse’.

The Vikings formerly were seafaring pirates who settled down during the 8th-10th century in various parts of North-western Europe. The Vikings also called themselves Ostmen or Danes. They had a fish-based diet that was protein-rich. This contributed to their tall and healthy bodies. The Vikings were great warriors and thus traditional Norse symbolism reflects courage and wisdom. The authentic Viking tattoos depict Norsemen having tough personalities with hard physical features. They were intellectual folk and believed to live in sync with nature. Norse mythology has a wide array of symbols that hold deep meanings of life and death, and these are extensively included in the Viking tattoos. These tattoo designs are generally huge and complex. Getting a full-fledged Viking tattoo will definitely test your patience as it takes hours to complete a detailed design. The popular TV show ‘The Vikings’ has done a considerable job in raising the awareness of the modern folk about the Nordic culture. Today, a large number of people take an interest to study Nordic mythology and cultural influence.

Here are a few Norse forearm tattoo ideas that you can dive into and easily choose your next tattoo design.

This tattoo showcases the perfectly braided hair and beard of a Norse God with horns wearing a crown made of a skull which has the look of a modern-day horned helmet. The sharp fangs of the skull are inked in bold line which reaches the eyebrows of the Viking God. The closed eyes illustrate deep thoughts. The features of the face describe him as a god of war. The dark inked eagle is one of the Viking symbols. The tattoo is done in dark black ink with perfect light shades in just the right places. If you are a fan of Norse mythology and have always been willing to get a Norse tattoo, this is the perfect piece for you.

This tattoo perfectly describes the night hunt. The Viking symbol of compass craved out in the dark inked wolf is called the Vegvisir. The vivid thunderstorm brings a dramatic effect to the tattoo. The entire tattoo is inked in black ink amongst which is a cleanly engraved Valknut symbol or the three interlocked triangles. Below that is a mule deer whose horns are curved up on both sides of the Valkut symbol. The deer, wolf, night sky, thunderstorms and dark trees create a perfect scenario of a night hunt. If you are into wolf tattoos and Viking symbolism, then ask your artist to ink you this Viking life tattoo.

The Life And Death Tattoo

The intrinsic patterns of the Norse forearm tattoo designs represent the Norse culture and the cycles of life and death. The freehand knotwork in this tattoo is done in a lighter shade to highlight the patterns while the background is kept dark. The tattoo stretches from the ventral side of the elbow starting with faraway hills followed by two wolves that symbolize life and competition and end below each fingernail in the shape of a trident. The symbol of Helm of Awe is done in dot work at various places throughout the tattoo along with numerous other symbols. Are you someone who is interested in Norse legend? If yes, this Nordic tattoo depicting the Viking culture is the right choice for you.

Nordic culture is very rich and includes a wide array of symbols and beliefs. This Nordic sleeve tattoo design includes a number of Norse symbols like the Valknut symbol, the Vegsivir, the Triskele, the Web of Wyrd, etc. The major part of the tattoo has intrinsically detailed knotwork. The dark background is done with minute dots which makes the lighter design pop up in the tattoo. Anyone looking for long sleeve tattoos inspired by Norse Gods or Norse mythology can go for inking this tattoo without a second thought.

This Viking sleeve tattoo is outlined using fine lines along the forearm. It is a no-nonsense tattoo that includes a dark outline and dot work along the length. The tattoo has the head of the creature with bold blue eyes with a hint of black, both done in dotted work. The slender body of the creature is partially coloured in rich red colour. Such body art representing Viking mythology is a unique choice for a tattoo. Usually, Viking tattoos are in complex patterns but this tattoo has a simple design.

This is a ferocious nordic wolf tattoo that has a cartoonish element to it. It seems like the wolf is trying to break free from the chain which symbolizes the craving for freedom. It is a fully coloured tattoo that has shades of brown, pink, orange and black. The wolf is in a hunting mood and is ready to bite. Wolves have immense importance in Nordic tradition. As coloured tattoos have a tendency to fade away faster than traditional ink tattoos, one should have a clear mind and should have good knowledge about the pigments their tattoo artist. If tattoo styles of animals of the Viking era attract you and you are in for experimenting with some colours, go for this tattoo.

This is a tattoo of a Viking warrior princess who is beautiful and bold. The Goddess is wearing protective armour and is holding a sword. She has wings along with sharp eyebrows and expressive eyes. The tattoo is inked in the form of a sketch and looks just out of a Disney handbook. The braids in the tattoo are very beautifully carved giving the tattoo a realistic look. If you are interested in a Viking warrior tattoo or Viking head tattoo, then look no further and go for this design.

The Viking compass is a symbol of guidance and protection. This nine worlds Vegvisir symbol tattoo is inked in bold black colour. One can see fine dotted work in this tattoo with the eight parts meeting at the centre. This is a pure traditional Nordic symbol from the Viking age. All the parts have a more dotted consistency towards the inner side while the dots slowly vanish on the outer end. The central part of the tattoo has a triangular structure with intrinsic knot work along its edges. The top and bottom of the tattoo are finished with single bold dots giving it a unique look. If a compass tattoo intrigues you, then this Viking tattoo design is just what you are looking for.

This is a Viking dragon tattoo that starts from the chest, follows through the shoulder, continues through the arm and stretches up to the wrist. The tattoo wraps around the arm and has a neat look. The outline is done in a fine continuous line with dotted shading throughout the body. Each scale of the dragon’s body is carefully engraved into the tattoo. This tattoo is an example of tedious work and takes approximately 2-3 days to complete. If you are fine with the time required to ink this design, you should definitely go for this tattoo.

This Viking tattoo is a neatly outlined artwork of the Vegvisir symbol from Norse mythology. The mythical design includes an eye at the centre which represents Nordic paganism. Norse pagans believe in the natural cycles of birth, growth and death and prefer living in sync with nature. Anyone who is inspired by the Nordic pagan culture and is looking for simple Viking tattoo designs, this tattoo is best suited for you.

There is a sea of Norse tattoo ideas that are popular amongst tattoo lovers. With our handpicked and precisely curated list of forearm Norse tattoo designs, there mustn’t be a problem in choosing a design that suits your taste. It is true that most Norse tattoo designs cover a huge area and has elaborate needlework. So people who are planning to get a Norse tattoo as their first tattoo or people with low pain tolerance show go for the designs that are simple and relatively have less area coverage. If you are opting to get colours inked, it is advisable to choose artists who use eco-friendly materials to ink. Also, it is better if you go to skilled and experienced tattoo artists to ink a Norse tattoo as they will be able to make this tedious and painful process bearable. You can get a customised Viking tattoo easily by modifying any of the above designs according to your liking. Now that you are clear with all the necessary precautionary measures, go get inked. Happy inking!