10 Best Nordic Tattoo Ideas You Have To See To Believe! 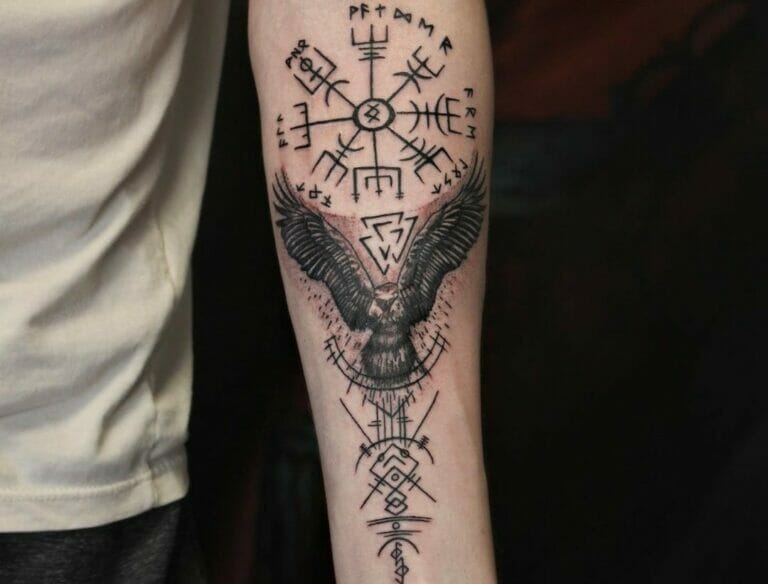 Are you a huge history nerd who loves to read about Nordic culture? Then here are some amazing Nordic tattoo designs for you to check out!

Nordic tattoo refers to the tattoo designs that include symbols from Norse mythology.

Norse mythology is a set of myths that was a big part of the lives of North Germanic Viking people who lived in Scandinavian countries. Even after the advent of Christianity in these regions, Norse mythology still has a lot of impact and influence on people across the world till this day.

The Viking warriors were seafaring people who raided, pirated and traded across the European nations from 9th to 11th century using ships. Each and every Viking warrior was very fearsome and could fight with a lot of strength. These warriors also wore Viking tattoos that represented the power and strength each of them held. The Viking tattoos were also a way to pay respect to the Nordic gods and to show their love for their families.

In recent popular culture, the dark TV show ‘Vikings’ has brought a lot of attention to these warriors and their way of life. The critically acclaimed TV show was praised for its accuracy regarding the portrayal of how the Vikings led their lives along with the realistic battle scenes. In addition to that, the Marvel Cinematic Universe also popularised Norse gods like Odin, Thor, Frigga and Loki due to the superhero Thor movies that were appreciated by fans all across the world.

Each and every Nordic tattoo has a deep and profound meaning based on the symbol or the god it is referring to. While for the ancient Vikings, these tattoos were a way of showing their strength to others, nowadays a lot of people get a Viking tattoo to show their love for Viking history and culture.

Odin was the most fearsome and powerful Nordic god worshipped by the Vikings. After all, Odin was the King of Gods and he was associated with wisdom, knowledge, war, healing, death as well as victory in battles. The Odin mask or the Nordic god mask tattoo was a special type of face covering worn by the men when they started for battles. These masks alone made the powerful Vikings look extremely frightening and intimidating.

If you decide to get an Odin mask Nordic tattoo, you should definitely reach out to the best tattoo artist in the area. After all, such a complex and intricate tattoo design will require a steady, patient hand who can deftly work on all the precise lines and patterns neatly.

Yggdrasil is the sacred tree in Nordic mythology which is at the centre of the universe. All the other nine worlds in the universe existed around the Yggdrasil. The roots and branches of this cosmic tree together tie the entire universe and all the different realms together.

As seen in the picture, the wearer has put the Yggdrasil in the middle with smaller symbols of the nine worlds surrounding the Tree. In addition to that the wearer has also added other popular Nordic or Viking symbols such as Odin’s ravens to show their knowledge about Nordic culture.

Tattoo aficionados and tattoo lovers who like to experiment with different types of tattoos and tattoo styles love to cover up their entire body with tattoos. One such uncommon area that they get tattooed is their neck which most people do not choose. After all, neck tattoos can be quite painful as the area on the neck is very sensitive and the skin is very thin at the front of the throat. In addition to that, they can also cause a lot of irritation and take a longer time to heal.

However, if you have decided to get a neck tattoo, you can also choose a great Nordic tattoo or Viking tattoo design for your neck. In the picture, the wearer has gotten the tattoo of Odin’s ravens on their neck. Odin’s two ravens used to represent war and were supposed to act as his eyes and ears since they brought him information from across the nine realms of the universe. Thus, they were an important part of Nordic mythology.

Intricate Nordic Tattoos For Your Hands And Fingers

In this picture, the wearer has combined various Nordic symbols together on their hands and fingers. On one hand, they have the Vegvisir symbol while on the other hand, they are sporting the Celtic knot tattoo with interlocking triangles. In addition to that, they have added tiny rune tattoos to their fingers.

The runes were basically the set of twenty-four letters used by the Vikings that was mostly derived from the Latin language. If you are looking for tiny Nordic tattoo art that is not too flashy and will not take up a lot of space either, you can get the Nordic runes tattoo on your arm, wrist, hand or fingers.

If you really like the idea of getting tiny tattoos on your fingers, then you need to check out these amazing finger tattoo designs to help you find the perfect tattoo for you.

Fenrir the Wolf is one of the most powerful and frightening fantastical creatures from ancient Nordic mythology who had slain warriors. Son of the God of Mischief Loki and giant Angerboda, Fenrir was the one who killed Odin, the king of all gods during Ragnarok. The Vikings considered wolves to have both positive and negative qualities. While evil wolves like Fenrir only caused chaos and destruction, normal wolves were also a powerful Viking symbol of bravery and loyalty to these people.

Therefore, if you want some stunning Nordic tattoos with animal motif, you can get a Nordic wolf tattoo.

Nordic Tattoos With The Vegvisir Symbol

Vegvisir is another popular Viking symbol that a lot of people love to get tattooed. This was a magical plank that guided people through rough storms and difficult circumstances. Therefore, the Vegvisir symbol was important for reminding people that no matter how difficult the situation may be, we have to keep walking towards our destiny with strength and power.

Jormungandr is a giant serpent or dragon-like beast. Jormungandr played a very important role in the Ragnarok, an event that signaled the end of Asgard as well as of the universe. According to the legends about Ragnarok, Jormungandr was the one who defeated Thor during the final battle of his life.

If you are fond of the stories about Ragnarok and are fascinated by the mythical fantastical creatures in these mythological stories, you should definitely get a Jormungandr tattoo. A lot of people also ask their tattoo artists to add bright colours to this specific Nordic dragon tattoo design to make it even more striking and attractive.

Ouroboros is a powerful symbol of a snake eating its own tail in Nordic tradition. This action led to the creation of a circular image that showed the transient nature of life where there was no beginning or end. Consequently, if you want a truly unique design with Viking art, you should definitely use the Viking symbol of Ouroboros.

Wonderful Viking Tattoos For Your Back

People who want to get large, elaborate tattoos often prefer to place them on their back or their chest as it provides a large enough space to complete the tattoo entirely. Since most of the Nordic tattoos are quite large in size, you can also choose to get one on your back.

As can be seen in the picture, the wearer has gotten a tattoo of a warrior wielding an axe while in the midst of a battle. The tattoo artist has added dark shaded effects to the monochromatic tattoo which makes the tattoo look like a handpainted picture. The face of the warrior also looks extremely realistic and authentic.

If you are in search of more inspiration for awesome tattoo designs that will look great on your back, check out these amazing Back tattoo designs!

Thor, the God of Thunder, is one of the most well-known Nordic gods who was famous for his power as compared to other gods and his control over lightning. The well-known symbol to denote Thor has to be his hammer which was called the Mjolnir.

Consequently, if you want a tattoo that shows the immense power of the God of Thunder, you can use the symbol of Mjolnir. You can also draw some inspiration from the picture above on how to create the perfect Nordic sleeve tattoo or colourful Nordic tattoo sleeve. The tattoo artist has done a wonderful task of making an awesome and unconventional Nordic forearm tattoo.

If you are in search for some more Viking tattoo designs, check out these amazing Viking Compass Tattoo designs for your next tattoo!

Therefore, if you live in these Scandinavian countries and have descended from the old Viking warriors, you can definitely choose a Norse or Viking tattoo for yourself. You can also get a Viking tattoo if you are a huge history buff who loves to learn more about ancient cultures and civilizations. Apart from that, you can also be someone who follows ancient traditions and believes in Norse paganism. Regardless of your reason, you will find plenty of amazing Nordic tattoos to choose one from for yourself.